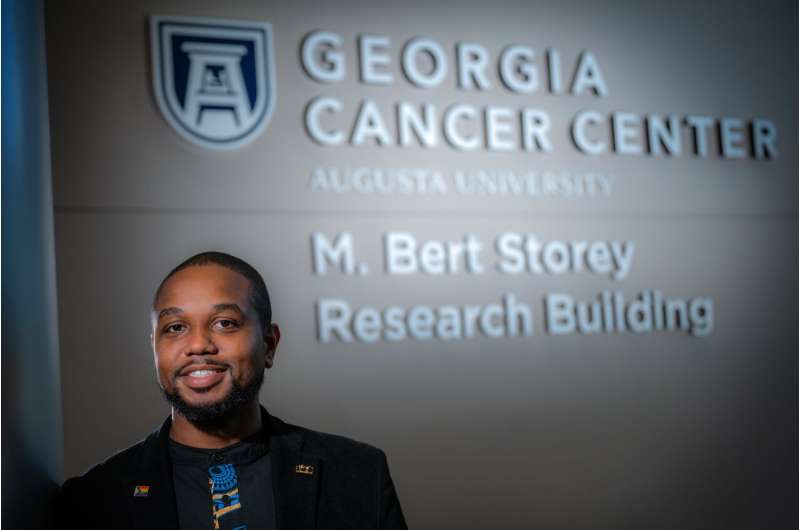 The wear and tear on the body from chronic and lifelong stress can also lead to an increased risk of dying from cancer, Medical College of Georgia researchers report.

That wear and tear, called allostatic load, refers to the cumulative effects of stress over time. “As a response to external stressors, your body releases a stress hormone called cortisol, and then once the stress is over, these levels should go back down,” says Dr. Justin Xavier Moore, epidemiologist at the Medical College of Georgia and Georgia Cancer Center. “However, if you have chronic, ongoing psychosocial stressors, that never allow you to ‘come down,’ then that can cause wear and tear on your body at a biological level.”

Investigators, led by Moore, performed a retrospective analysis of more than 41,000 people from the National Health and Nutrition Examination Survey, or NHANES, collected between 1988-2019. That database includes baseline biological measures of participants—body mass index, diastolic and systolic blood pressure, total cholesterol, hemoglobin A1C (higher levels indicate a risk for diabetes), albumin and creatinine (both measures of kidney function) and C-reactive protein (a measure of inflammation)—that the researchers used to determine allostatic load. Those with a score of more than 3 were categorized as having high allostatic load.

Then they cross referenced those participants with the National Death Index, maintained by the National Center for Health Statistics and the Centers for Disease Control and Prevention, to determine which people died from cancer and when, Moore explains.

“To date, there has been limited research on the relationship between allostatic load and cancer among a current, nationally representative sample of US adults,” Moore and his colleagues write in the journal SSM Population Health. “Examining the association of allostatic load on cancer outcomes, and whether these associations vary by race may give insight to novel approaches in mitigating cancer disparities.”

The researchers found that, even without adjusting for any potential confounders like age, social demographics like race and sex, poverty to income ratio and educational level, those with a high allostatic load were 2.4 times more likely to die from cancer than those with low allostatic loads.

“But you have to adjust for confounding factors,” Moore explains. “We know there are differences in allostatic loads based on age, race and gender.”

In fact, in previous research he and his colleagues observed that when looking at trends in allostatic load over 30 years among 50,671 individuals, adults aged 40 and older had greater than a 100% increased risk of high allostatic load when compared to adults under 30. Further, regardless of the time period, Black and Latino adults had an increased risk of high allostatic load when compared with their white counterparts. Much of that, Moore says, can be attributed to structural racism—things like difficulty navigating better educational opportunities or fair and equitable home loans.

“If you’re born into an environment where your opportunities are much different than your white male counterparts, for example being a black female, your life course trajectory involves dealing with more adversity,” he says.

Even when controlling for age, the researchers found that people with high allostatic load still have even 28% increased risk of dying from cancer. “That means that if you were to have two people of the same age, if one of those people had high allostatic load, they are 28% more likely to die from cancer,” Moore says.

Adjusting for sociodemographic factors including sex and race and educational level, high allostatic load led to a 21% increase; and further adjusting the model for other risk factors like whether participants smoked, previously had a heart attack, or been previously diagnosed with cancer or congestive heart failure, led to a 14% increase.

Moore and colleagues further examined the relationship between allostatic load and cancer mortality specifically among each racial/ethnic group (e.g., non-Hispanic Black, non-Hispanic white, and Hispanic adults). However, allostatic load was not as strongly related when broken down by race categories. These findings could be explained by the sheer size of the original sample.

“Epidemiologically, when looking at 41,000 people, there are many cancer related-death events,” Moore explains. “However, it is more difficult to ascertain a relationship between x (allostatic load) and y (cancer death) when you essentially have less datapoints to measure.” For example, limiting the sample to just non-Hispanic Blacks would mean analyzing a sample of just 11,000 people, so the relationship may look diminished or attenuated.

“The reason race even matters, is because there are systemic factors that disproportionately affect people of color,” he says. “But even if you take race out, the bottom line is that the environments in which we live, work and play, where you are rewarded for working more and sometimes seen as weak for taking time for yourself, is conducive to high stress which in turn may lead to cancer development and increased morbidity and mortality.”