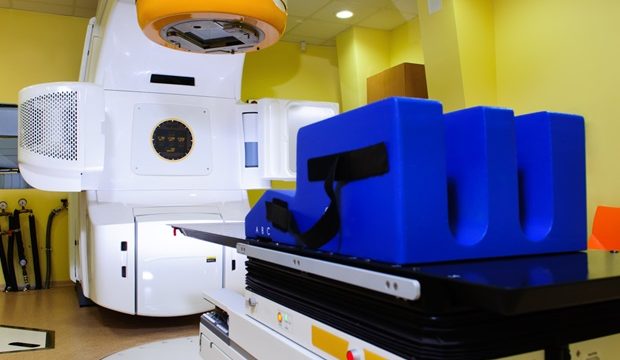 The clinical trial findings suggest radiation oncologists may play a valuable role in treating widespread bone metastases even in the absence of symptoms. Palliative radiation has historically focused on reducing existing pain and other symptoms when a patient's cancer is no longer considered curable. Investigators hoped to show that painful complications could be prevented by treating asymptomatic bone metastases with radiation and were surprised to find the benefits may extend beyond comfort.

It's thought-provoking that radiation to prevent pain could potentially prolong life. It suggests that treating to cure the cancer is not the only thing that can help people live longer."

The study arose from the observation that many patients hospitalized for painful bone metastases have evidence of these lesions on imaging scans several months earlier, Dr. Gillespie said. Although external beam radiation therapy is standard-of-care for painful lesions, it has not been used for asymptomatic ones outside of the oligometastatic setting; generally, patients remain on systemic therapy until lesions become symptomatic. Dr. Gillespie and her colleagues wanted to determine "if and when we might intervene before these symptoms occur to prevent hospitalizations and debility from cancer."

For the study, researchers identified 78 adults with a metastatic solid tumor malignancy and more than five metastatic lesions, including at least one asymptomatic high-risk bone lesion. Whether a lesion was high-risk was determined by its size (if it was 2 centimeters or more in diameter); its location in the junctional spine; whether it involved the hip or sacroiliac joint; or if it was in one of the long bones of the body, such as those found in arms and legs. Between all enrolled patients, there were a cumulative 122 bone metastases.

Among study participants, the most common types of primary cancer were lung (27%), breast (24%) and prostate (22%). Participants were randomly assigned to receive standard treatment, which could include systemic treatment (such as chemotherapy or targeted agents) or observation, with or without radiation therapy to treat all of their high-risk bone metastases. Radiation doses varied but were typically low (i.e., not ablative). All patients were followed for at least 12 months or until they succumbed to their disease.

The primary endpoint was to determine whether treating asymptomatic lesions could prevent skeletal-related events (SREs) – a common and often painful and debilitating complication of bone metastases. SREs include pain, fractures and compression of the spinal cord that requires surgery or radiation. They can contribute to a higher risk of death and higher health care costs.

Researchers found that treating the asymptomatic lesions with radiation reduced the number SREs and SRE-related hospitalizations and extended overall survival, compared to people who received no radiation. At the end of one year, for patients on the radiation arm, SREs occurred in 1 of 62 lesions (1.6%), compared to 14 of 49 lesions (29%) for those receiving standard care (p<0.001). Significantly fewer patients in the radiation arm were hospitalized for SREs (0 vs. 4, p=0.045).

After the first three months, patients in the radiation arm reported less pain than those in the standard care arm (p<0.05), a trend that continued but was no longer statistically significant for the remainder of the study. There were no significant differences in quality of life between the two arms at any point in the study.

Though it was not in the initial study design, Dr. Gillespie said the team performed an unplanned analysis of which lesions were most likely to cause SREs. While they expected to find those in the long bones might cause more fractures and pain, they found it was metastases in the spine that were most likely to cause subsequent pain, cord compression or fracture. However, the numbers are small and will require further evaluation to confirm.

Treating those lesions with "even low doses of radiation seemed adequate to prevent the lesion from progressing and causing problems," Dr. Gillespie said.

Dr. Gillespie emphasized that because of the study's small size, its findings, while hypothesis-generating, were not definitive and a larger study is needed to replicate and expand on these analyses. "Our trial results add to a growing field of study examining the potential of early supportive care, but they still need to be confirmed in a larger phase III trial," she explained.

She also said future research should seek to answer questions such as: "Does this apply to someone early in the course of their metastatic disease who may not have any symptomatic lesions? At what point would they benefit from intervention with radiation? There are many patients with multiple sites of metastases, but how do we identify those lesions that are most likely to become problematic?"

"And, once we confirm this is the right thing to do," she said, "how do we ensure patients who might benefit get access to this treatment?"