In most cases, passengers on an airline flight are representative of the general population, which means that anyone could have an emergency at any time.

A study published in The New England Journal of Medicine in 2013 showed that a medical emergency occurred in 1 per 604 flights, as determined on the basis of in-flight medical emergencies that resulted in calls to a physician-directed medical communications center, said Amy Faith Ho, MD, MPH of Integrative Emergency Services, Dallas–Fort Worth, Texas, in a presentation at the American College of Emergency Physicians (ACEP) 2022 Scientific Assembly.

The study authors reviewed records of 11,920 in-flight medical emergencies between January 1, 2008, and October 31, 2010. The data showed that physician passengers provided medical assistance in nearly half of in-flight emergencies (48.1%) and that flights were diverted because of the emergency in 7.3% of cases.

The majority of the in-flight emergencies involved syncope or presyncope (37.4% of cases), followed by respiratory symptoms (12.1%) and nausea or vomiting (9.5%), according to the study. 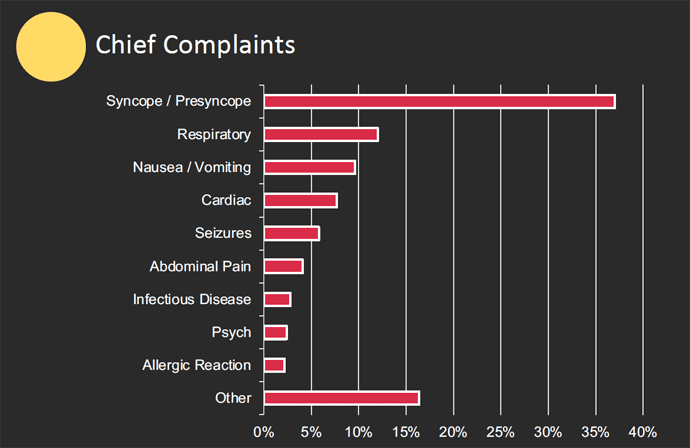 When a physician is faced with an in-flight emergency, the medical team includes the physician himself, medical ground control, and the flight attendants, said Ho. Requirements may vary among airlines, but all flight attendants will be trained in cardiopulmonary resuscitation (CPR) or basic life support, as well as use of automated external defibrillators (AEDs), she noted.

Tools in a physician’s in-flight toolbox start with the first-aid kit. Airplanes also have an emergency medical kit (EMK), an oxygen tank, and an AED.

How to Handle an In-Flight Emergency

Physicians should always carry a copy of their medical license when traveling for documentation by the airline if they assist in a medical emergency during a flight, Ho emphasized. “Staff” personnel should be used. These include the flight attendants, medical ground control, and other passengers who might have useful skills, such as nursing, the ability to perform CPR, or therapy/counseling to calm a frightened patient. If needed, “crowdsource additional supplies from passengers,” such as a glucometer or pulse oximeter, she added.

Physicians are not obligated to assist during an in-flight medical emergency, said Ho. Legal jurisdiction can vary, she noted. In the United States, a bystander who assists in an emergency is generally protected by Good Samaritan laws; for international airlines, the laws may vary; those where the airline is based usually apply, she said.

The Aviation Medical Assistance Act, passed in 1998, protects individuals from being sued for negligence while providing medical assistance, “unless the individual, while rendering such assistance, is guilty of gross negligence of willful misconduct,” Ho noted. The Aviation Medical Assistance Act also protects the airline itself “if the carrier in good faith believes that the passenger is a medically qualified individual,” she added.

Heidi Splete is a freelance medical journalist with 20 years of experience.