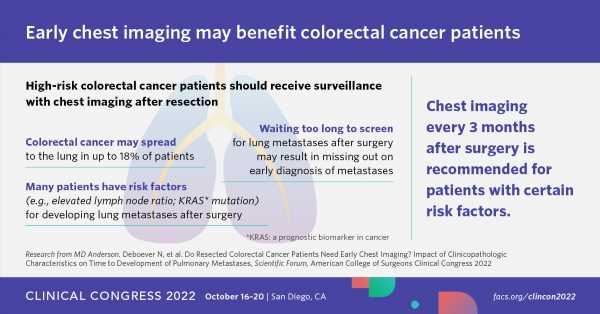 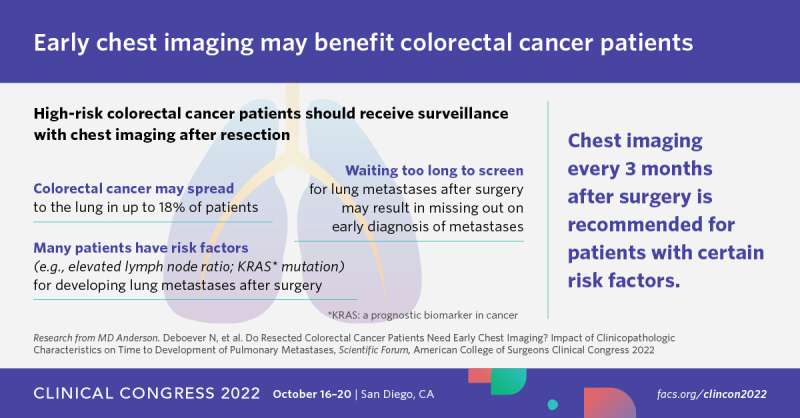 Colorectal cancer patients with certain clinical characteristics may benefit from more frequent chest imaging to help identify and target cancer that has spread to the lungs, according to new research presented at the Scientific Forum of the American College of Surgeons (ACS) Clinical Congress 2022. These findings have the potential to improve long-term outcomes of patients with metastatic colorectal cancer.

“After patients are diagnosed with colorectal cancer, many of them want to better understand what their cancer diagnosis entails in terms of their surveillance and survivorship for the rest of their life, but we currently lack data and uniform guidelines to support how often these patients should be screened with chest imaging,” said co-author Mara Antonoff, MD, FACS, associate professor, thoracic and cardiovascular surgery, UT MD Anderson Cancer Center, Houston, where she also serves as program director of education. “With this study, we sought to develop a strategy that is evidence-based to determine how frequently, at what intervals, and for how long patients at risk of developing lung metastases should undergo imaging of their chest.”

Dr. Antonoff specializes in thoracic surgical oncology and has a clinical interest in colorectal cancer that has spread to the lungs. She is leading a multi-institutional study, under the umbrella of the American Association for Thoracic Surgery (AATS) Thoracic Surgery Oncology Group (TSOG) (TSOG 103), on developing optimal treatment strategies for colorectal cancer patients whose cancer spread is limited to the lungs.

To identify which colorectal cancer patients may benefit from early chest imaging and at what time intervals, Dr. Antonoff and an interdisciplinary team of researchers at MD Anderson—including cardiothoracic surgeons, colorectal cancer surgeons, and gastrointestinal oncologists—collaborated on this research project to investigate evidence-based surveillance guidelines for colorectal patients who are at risk of developing lung metastases.

Using two MD Anderson cancer databases that included both colorectal cancer patients and thoracic cancer patients, the study team retrospectively reviewed data from patients with colorectal cancer who did and did not develop lung metastases. Patients were grouped according to the development of lung metastases and the timing of their diagnosis. The team used statistical methods to investigate which clinical characteristics, such as age or genetic factors, correlated most with the risk of developing lung metastases.

Nathaniel Deboever, MD, general surgery resident, UTHealth Houston McGovern Medical School, and the lead author of the study, noted that while these risk factors are not necessarily surprising from a clinical perspective, they highlight the need to adequately screen certain colorectal cancer patients after surgical treatment. In some cases, removing cancerous lung nodules surgically early on can significantly improve outcomes.

“A concrete clinical application of this research, following validation, is to build evidence-based guidelines affecting chest surveillance in patients with resected colorectal cancer,” said Dr. Deboever, who completed this research as part of his research fellowship with the department of thoracic and cardiovascular surgery at MD Anderson. “These guidelines will hopefully allow high-risk patients to undergo radiographic screening in a timely manner, permitting the early diagnosis of pulmonary disease.”