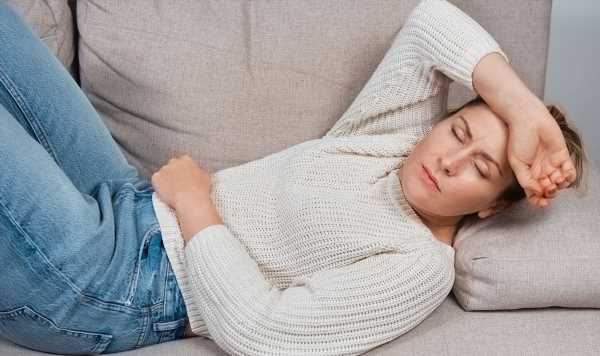 Cancer symptoms: Top 14 early signs to look out for

Like many diseases, cancer tends to present with a constant set of symptoms that worsen over time. Sometimes, however, the intensity of some signs may be greater in the morning, making them more noticeable upon waking. According to various health bodies, three signs are more likely to strike in the early hours of the day.

Cancer Research UK says: “Fatigue is very common in people with cancer, it can be the most troublesome symptom.

“Many people say it’s the most disruptive side effect of all. Cancer-related fatigue can affect you physically, emotionally and mentally.”

Fatigue in cancer is most often the result of cancer cells depleting the body’s nutrient stores to grow and advance.

This nutrient theft means the body no longer has what it needs to replenish itself, making it extremely tired.

According to the Cancer Centre, fatigue may be more pronounced with blood cancers, as these diseases originate in the bone marrow.

Bone marrow is a vital determinant of cancer severity as it is in charge of producing the red blood cells that carry oxygen to different parts of the body.

However, although fatigue may be more pronounced in blood cancers, it is a common affliction across all types of cancer.

This is also the case with nausea, which is a characteristic of brain tumours, liver tumours and gastrointestinal tumours.

The Cancer Council explains: “People with advanced cancer often have problems with feeling sick or being sick.

“This can be caused by treatment with chemotherapy or radiation therapy, cancer growth, blockage of the bowel or the location of cancer.”

In fact, seven out of 10 people with advanced cancer report having nausea and vomiting, making it a very common sign.

It should be noted, however, that feeling sick can be a side effect of several health complications, and is rarely linked to cancer.

Nausea first thing in the morning is often interpreted as a clear indication that the disease is taking hold, particularly in the case of breast cancer.

Breast Cancer Now explains: “Signs that breast cancer may have spread to the brain include feeling sick (nausea) and being sick, especially when waking up in the morning.”

This may also be the case for certain brain tumour symptoms, according to Brain Tumour Research.

The Health body states: “Headaches are one of the main symptoms of a brain tumour, but of course, there can be many reasons for having a headache.”

Headaches caused by a brain tumour may have several particular characteristics, including being severe and persistent.

The health body adds that they may worsen over a number of days or maybe “worse in the morning”.

Despite cancer symptoms being ill-defined, it’s important not to overlook any suspicious bodily changes in case they’re signalling an underlying malignancy.

A GP may arrange for you to see a hospital doctor to investigate any unusual symptoms further, and this could have life-saving implications.