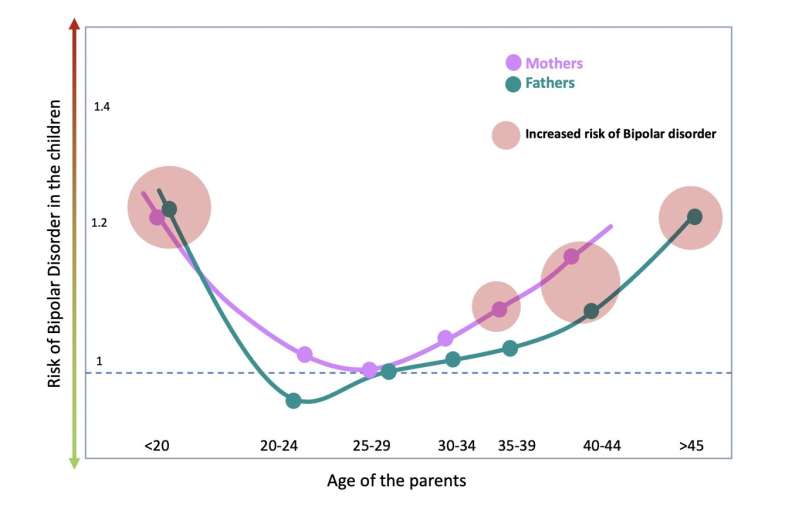 Children of either younger or older parents carry an increased risk of bipolar disorder. This risk is greater if you were born to a mother or father younger than 20 years old, if your mother was older than 35, or your father was older than 45. This tendency produces a U-shaped curve showing increased risks for younger and older parents. This work is presented at the ECNP Congress in Vienna, after recent publication in the journal European Neuropsychopharmacology.

Bipolar disorder, in which sufferers can swing from moods of elation to moods of extreme depression, is one of the most common serious mental illnesses, affecting around 2% of people, and carries a high risk of suicide and premature death. It is known to have high heritability; if one parent has bipolar disorder there’s a 15% to 30% chance that this will be passed on to their children.

Study leader Dr. Giovanna Fico, of the University of Barcelona, said, “Parental age is a factor which affects many conditions, such as fertility and some neuropsychiatric disorders. What we have found is slightly unusual because both younger and older parents carry an increased risk of having a child with bipolar disorder. The increased risk is moderate, but real.

“We can speculate that younger parents may be affected by environmental factors, such as socio-economic problems, lack of support, but also stress or immunological factors, and that older parents may have genetic factors coming into play, but the truth is we don’t really know.”

The researchers, from Spain, Italy, Australia and the Netherlands, undertook a systematic review of studies from various countries which relate bipolar disorder to age. In total the studies included 13,424,760 participants, of whom 217,089 had bipolar disorder.

Giovanna Fico said. “Again, we must stress that this risk is moderate, and it must be kept in perspective. However, for those already at risk, age is another factor that should be taken into consideration, and so it may be that doctors need to counsel both younger and older couples if they have a risk of bipolar disorder. We also see this U-shaped curve in some other conditions, such as autism and some cardiovascular diseases.

“We are planning to study several environmental factors which might be related to the risk of bipolar disorder, but also to its course of illness. For example, we would like to explore how the exposure to pollution, climate changes, urbanization might affect the risk of some psychiatric disorders, and we want to try to understand if these factors help or worsen the course of the disorder.”