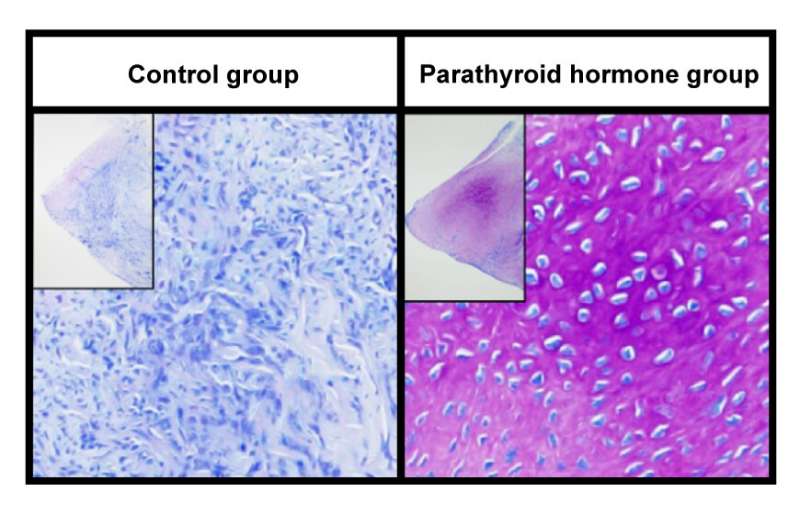 The knee meniscus is an important tissue that protects the joint; if the meniscus is damaged—by sports injury or aging—it often does not heal on its own. There are two surgical methods for treating a torn meniscus: repair with a suture and graft or removal.

Because removing the meniscus leads to further damage, the graft surgery is preferred for meniscus reconstruction. In countries where donated meniscal allograft is unavailable the patient’s own tendon can be transplanted into the knee to strengthen the damaged meniscus. However, differences between the tendon and meniscal tissue, cause the outcomes of meniscus graft surgeries to lack consistency.

A group led by Osaka Metropolitan University researchers, Professor Hiroaki Nakamura, Dr. Yusuke Hashimoto, and graduate student Kazuya Nishino, MD, at the Department of Orthopedic Surgery, Graduate School of Medicine, thought that they might be able to treat the transplanted tendon, making the tissue similar to that of the original meniscus; this would improve treatment results and protect knee cartilage from further damage. They turned their attention to parathyroid hormone, which is used as a treatment for osteoporosis.

The research group administered parathyroid hormone to cells collected from rat Achilles tendons and cultivated them. They observed increased production of cartilaginous matrix and expression of genes involved in chondrogenic differentiation. The same was found when parathyroid hormone was injected into the Achilles tendon of rats, which created a cartilaginous matrix within the tendon tissue.

The researchers grafted the Achilles tendons injected with parathyroid hormone to the meniscus defect area of rats with meniscus resection to evaluate chondrogenesis. They found increased expression of genes involved in chondrogenesis after four weeks, suggesting that parathyroid hormone may act on tendon cells or undifferentiated mesenchymal stem cells within the tendon to maintain chondrogenic differentiation, thereby creating a more meniscus-like tissue.

First author Kazuya Nishino, MD, concluded, “We have made a highly novel discovery that parathyroid hormone administered to tendons induces tendon cartilage chondrocyte differentiation without ossification. We hope to improve the outcome of meniscus reconstruction surgery and protect knee cartilage in patients who have their meniscus removed at a young age.”