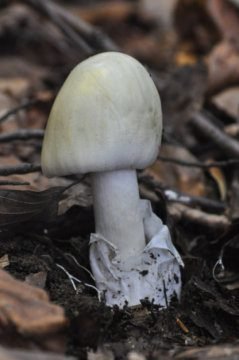 The death-cap mushroom has a long history as a tool of murder and suicide, going back to ancient Roman times. The fungus, Amanita phalloides, produces one of the world’s deadliest toxins: α-amanitin. While it may seem ill-advised, researchers are eager to synthesize the toxin because studies have shown that it could help fight cancer. Scientists now report in the Journal of the American Chemical Society how they overcame obstacles to synthesize the death-cap killer compound.

α-Amanitin achieves its impressive deadliness by acting as a potent inhibitor of RNA polymerase II, the enzyme primarily responsible for transcribing genes into the messenger molecule RNA. Using α-amanitin bound to antibodies against tumor molecules, cancer researchers have reportedly cured mice of pancreatic cancer. These conjugates are currently in human trials; however, the only way to obtain α-amanitin so far has been to harvest mushrooms, which is time-consuming and results in relatively small amounts of the compound. Synthetic production approaches have been hampered by α-amanitin’s unusual bicyclic structure, among other tricky features. David M. Perrin and colleagues decided to take on the challenge to produce the toxin in the laboratory, once and for all.

The researchers had to work through three key obstacles to produce α-amanitin in the laboratory: production of the “oxidatively delicate” 6-hydroxy-tryptathionine, the an enantio- selective synthesis of (2S,3R,4R)-4,5-dihydroxy-isoleucine and a diastereoselective sulfoxidation to favor the (R)-sulfoxide. Due to its toxic nature, the researchers limited production to less than a milligram, but based on their results, they are confident that good yields are can be readily obtained by scaling up the process. The researchers also say that the development of this synthetic route will enable chemists to attenuate the toxicity and potentially improve α-amanitin’s activity against cancer, something that is only made possible by the use of synthetic derivatives.