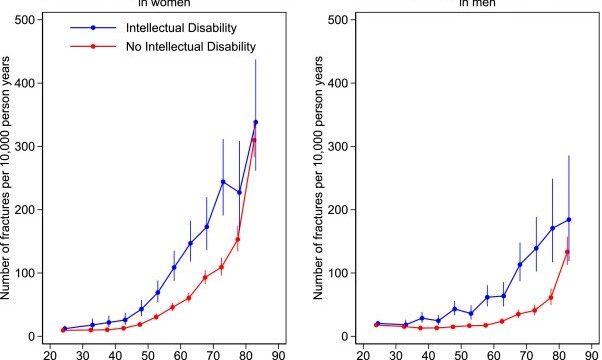 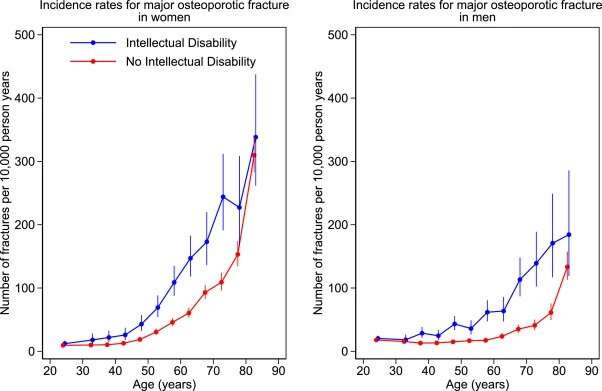 The researchers, led by Senior Clinical Researcher Valeria Frighi at the Department of Psychiatry, looked at rates of fracture recorded either in general practice or in hospital records, over a 20-year period, 1998–2017. They compared rates between 43,000 individuals with intellectual disability (also known as learning disability) and 215,000 without, throughout the life course.

Margaret Smith, senior statistician and epidemiologist from the Nuffield Department of Primary Care Health Sciences explains further: “We estimated that in 10,000 women over 50 years old with intellectual disability 53 would be expected to develop a hip fracture over one year compared to 23 in the general population. For men over 50 years old these numbers are 38 and 10 respectively.”

Hip fractures are devastating for the individual, often lead to permanent physical disability, can lead to premature death, and are extremely costly for NHS and social care. To a large extent, they are also preventable if the risk is recognized and adequately managed.

Ongoing research by the same team is investigating the reasons for such high rate of fracture in people with intellectual disabilities. These could include impaired bone mass due to limitations in mobility and sedentary lifestyle, a tendency to fall, and accompanying medical conditions.

Active fracture prevention strategies should include promotion of safe physical exercise, reduction in the risk of falls, addressing co-existent medical disorders, and ensuring optimal vitamin D and calcium intake. There could also be opportunities to reduce fracture rates through the wider use of existing drug therapies for osteoporosis. Meanwhile, clinical guidelines should be updated to include people with intellectual disabilities in those at risk of osteoporotic fracture, particularly hip fracture.