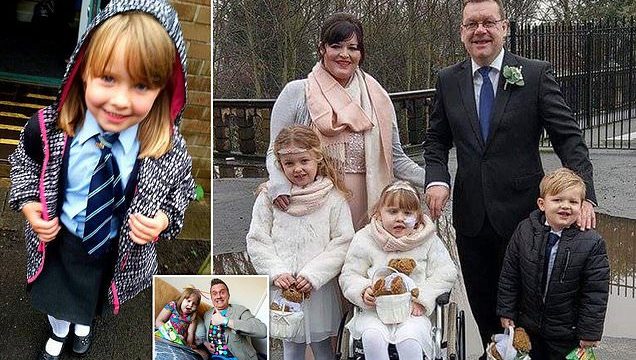 Doctors repeatedly told parents of girl, six, who refused to eat she was ‘just a fussy eater’ before she died of a deadly brain tumour that robbed her of appetite, energy and strength 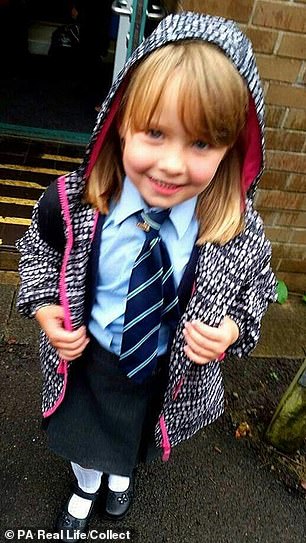 A six-year-old girl who showed signs of a food phobia was killed by an aggressive cancer after doctors realised the symptoms were actually a brain tumour.

Sophia ‘Fifi’ Hagreen passed away at home in April, seven months after being diagnosed with diffuse intrinsic pontine glioma (DIPG).

The terminal condition cruelly stole her sight and her mobility before she died in the arms of her devastated parents Julia and Darren.

It struck Mr and Mrs Hagreen as odd when Fifi lost her appetite, began refusing food and even choked on her favourite snack, a Babybel cheese, a year before her diagnosis.

After multiple trips to their GP, the couple, from Rastrick, West Yorkshire, were advised to seek counselling to get Fifi over her ‘fussy eating’.

But when the youngster started slurring her speech and showed signs of confusion, her concerned parents took her to their doctor once more.

She collapsed in the surgery and was rushed to Calderdale Royal Hospital in Halifax, where a CT scan revealed the tumour in the back of her brain.

When the family were told Fifi had just nine to 12 months to live, they dedicated the final months of their daughter’s life to making one of her wishes come true.

The couple decided to get married after 20 years and have Fifi as their wedding planner. 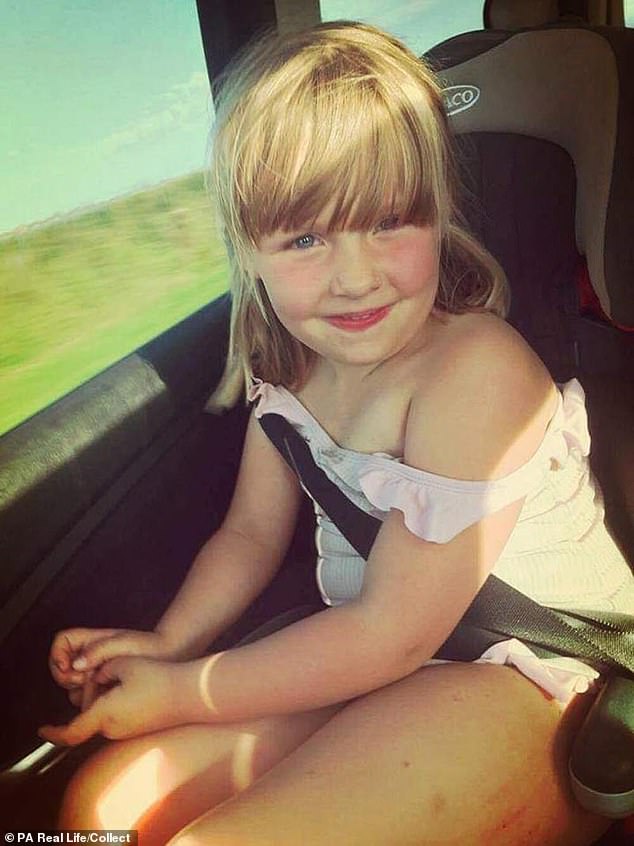 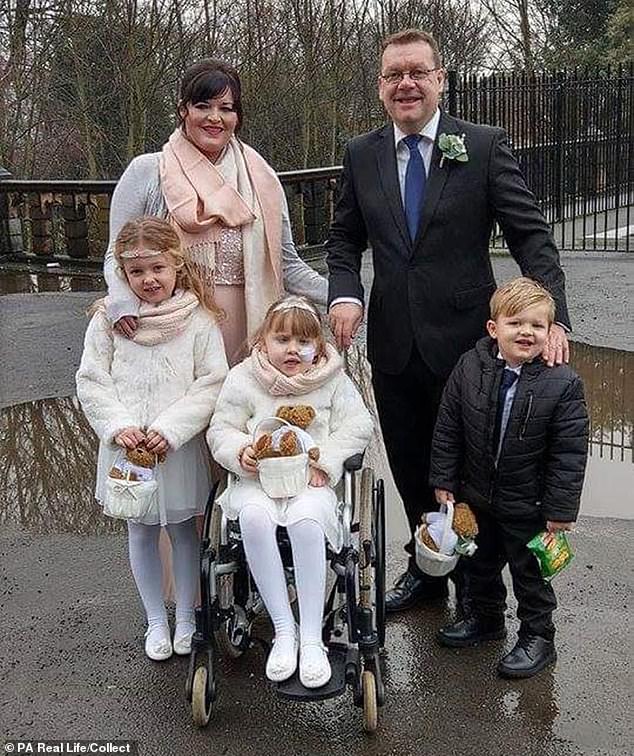 Fifi with siblings Mollie, eight, and George, four, at their parents wedding in December – which the youngster planned herself 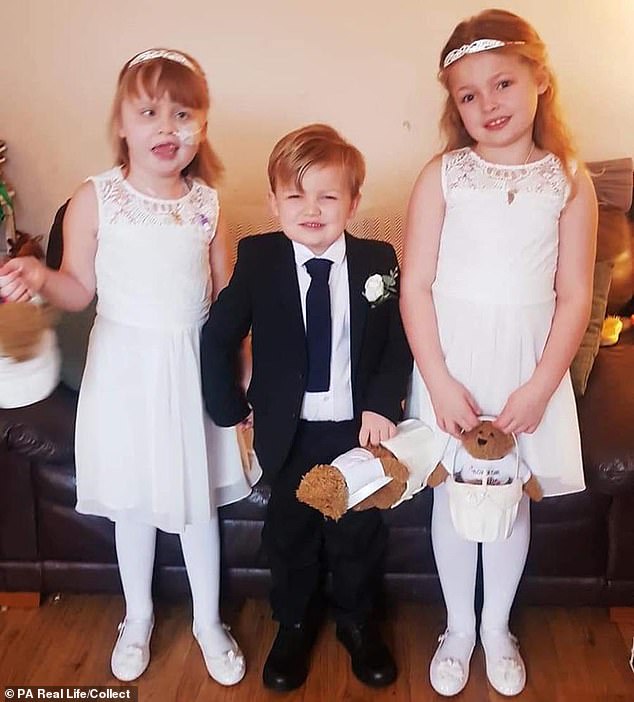 The children prepare to see parents Julia and Darren walk down the aisle in Calderdale Register Office, Halifax

Mrs Hagreen said: ‘We never wanted a big wedding, but we knew we would do it at some point and I couldn’t do it without Fifi there.

‘She was our wedding planner. She loved making lists while she was at home, of her favourite food and favourite songs, so she did the same for the wedding – deciding what everyone would wear.

‘We got married in Calderdale Register Office, Halifax, in front of our close friends and family and stayed in a hotel.

‘It was not how we would have wanted to do it, but it was lovely to see Fifi’s smiling face.’

The couple – who have two more children, Mollie, eight, and George, four – are now campaigning to raise awareness of DIPG and improve palliative care.

DIPG is a tumor that affects the brain stem, just at the top of the spinal cord, and it is ‘diffuse’ (spread), meaning there is no clear separation between the brain stem and the tumor.

The brain stem consists of the medulla (at the bottom), the pons (in the middle) and the mid-brain (at the top).

To classify as DIPG, half of the tumor has to be in the pons, the region of the brain stem which controls breathing, communication, hearing and taste.

That is why it’s inoperable, and also very hard to biopsy (i.e. to remove even a morsel of cells from the tumor to study its biology under the microscope).

Damage to the brain stem can cause breathing difficulties or sleep apnea, or, just as easily, a stroke, a coma, locked-in syndrome, or death.

Unable to remove it, doctors have been forced to rely on radiation therapy alone – shooting in the dark at an impervious target with blunts – which has thus far proven unsuccessful.

There is no treatment, and patients generally are given a life expectancy of six to 16 months.

An average of 40 children a year develop the cancer in the UK.

She said: ‘Then there was an incident where she started choking on a Babybel cheese and I had to give her some thumps to the back to dislodge it.

‘This started to develop into what we thought was a food phobia, and she would have trouble swallowing. Looking back now we realise this was probably caused by the cancer.

‘She had lost weight but she was growing up, so we thought it was either down to the food phobia or she was just growing as children do. A couple of times she woke up crying and was sick in the morning.’

The mother took Fifi to the doctors and out of hours surgery on four occasions during August, as the youngster started to become increasingly confused and clumsy, and kept repeating, ‘I love you Mummy’.

She added: ‘At that stage, it could have been a sign of nerve damage or a virus. It sounds awful, but we were hoping it was a stroke, because at least then there was hope of treatment – anything but a brain tumour.’

Following an MRI scan at Huddersfield Royal Infirmary, the couple could tell straight away it was bad news.

Mrs Hagreen said: ‘The consultant could not look us in the eye. They took us back to the ward then said, ‘We’re really sorry but she has an aggressive cancer, a brain tumour.

‘Darren screamed and walked out and I just sat staring at the floor. It was horrendous news.

‘They said she had a large mass in the middle of the brain, which had entwined itself around her healthy cells.’

DIPG is an incredibly rare, inoperable tumor in the most sensitive part of the brain, which nobody has survived.

The tumour affects the brain stem, just at the top of the spinal cord, and it is ‘diffuse’ (spread), meaning there is no clear separation between the brain stem and the tumor.

That is why it’s inoperable, and also very hard to biopsy – to remove even a morsel of cells from the tumor to study its biology under the microscope.

Damage to the brain stem can cause breathing difficulties or sleep apnoea, or, just as easily, a stroke, a coma, locked-in syndrome, or death.

Unable to remove it, doctors have been forced to rely on radiation therapy alone – shooting in the dark at an impervious target with blunts – which has thus far proven unsuccessful.

It strikes 150-300 people a year – predominantly children under the age of 10. There is no treatment, and patients generally are given a life expectancy of six to 16 months.

Fifi was one of an average of 40 children a year to develop the cancer in the UK. 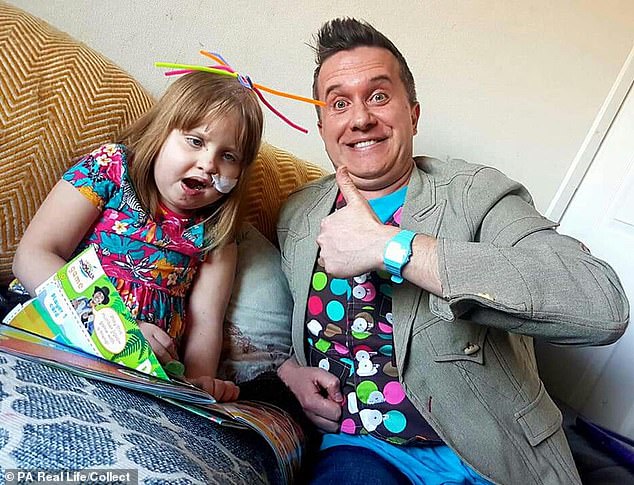 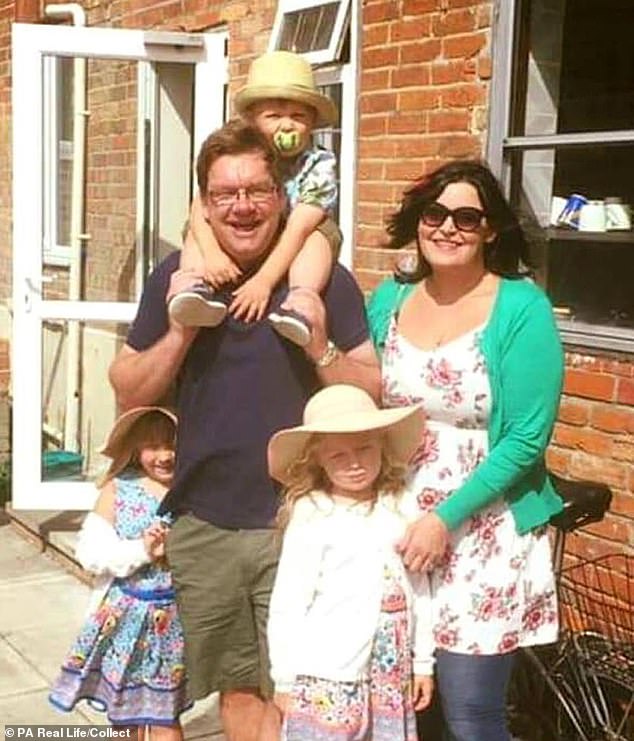 Happy family: Fifi clutches onto her father’s shirt as they pose for a lovely snap at home in Rastrick, West Yorkshire

Her mother said: ‘When you realise you can’t protect your child from this awful disease and that it’s going to kill them, you just want to make them feel happy and safe and make sure they don’t have that fear that you’re feeling. That’s for the parents to carry, not for them.’

Fifi was treated unsuccessfully with an experimental chemotherapy drug, followed by a six-week course of radiotherapy to try and prolong her life.

But she started to deteriorate soon after her diagnosis, losing feeling in her left side after the biopsy, which affected her mobility and ability to swallow.

After spending five weeks in hospital, she was allowed home to be with her family.

Her mother added: ‘We had seven and a half months with her. At least we got that time, as a lot families do not get to come back home.

‘Fifi hated being in hospital. Although she was unable to speak, she would write things down. At one point she wrote, ‘I’m worried I’m going to live in the hospital,’ and ‘I do not want to die’.

‘My aim then was to protect her from knowing the disease was going to kill her. ‘

Bringing her home, Fifi was unable to return to school full time but did manage to go in for a few hours a week, where her friends treated her like a celebrity.

She spent the rest of the time doing arts and crafts and playing with her pet guinea pigs and kitten Cupcake, as well as taking trips to see the Blackpool Illuminations, going to Center Parcs and to the Leicester Space Centre.

‘Cupcake was so important, especially towards the end when Fifi had lost her sight. She could still stroke the kitten and hear it purr, which helped her to relax,’ Mrs Hagreen explained.

The highlight was meeting Mister Maker from television channel CBeebies who came to her house because she was too poorly to travel to meet him.

But her big day was when her parents tied the knot on December 21. 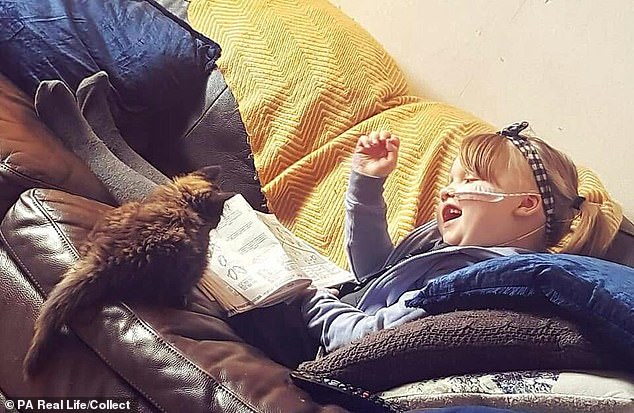 Her mother said: ‘She deteriorated pretty quickly after the diagnosis. She was wheelchair bound, unable to walk very far and she lost movement in her left side.

‘Towards the end, she started to have one or two seizures a day, which was really scary.

‘We moved her bed downstairs and I would sleep down there with her. We just wanted her to be as comfortable as possible.

‘About six weeks before she died she started to lose her eyesight. She would say, ‘Why is it so dark, Mummy?’ She would love playing on the iPad and I think it just started to get darker and darker. But she seemed so calm about it.

‘I told her it was to do with her ‘head bug’ and she accepted that. Children are so resilient and she coped with it better than her mum and dad did.’

Fifi died on April 12 this year, with her parents by her side.

‘The nurses had told us her breathing would change, as that is one of the biggest signs that the body is starting to struggle,’ her mother added.

‘That morning I told Mollie and George to give her a kiss goodbye, because I knew she did not have long. 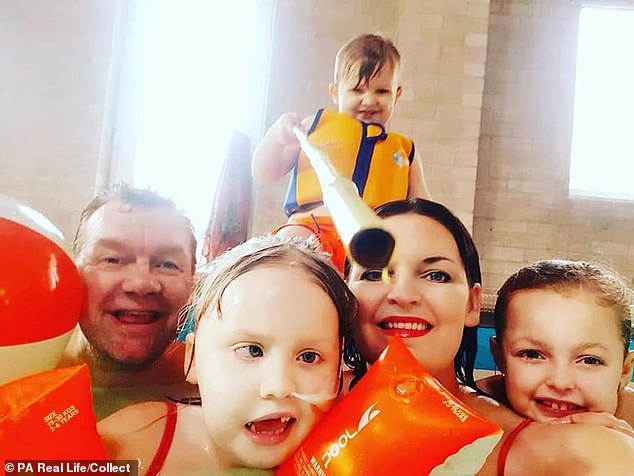 ‘We lay down next to her all day, playing her favourite songs, and then she just stopped breathing. It was really peaceful. I told her, “You sleep and Mummy will stay right here”.’

Fifi’s funeral was held at St Matthew’s Church in Rastrick and she was buried in the cemetery across the road from her school.

Mrs Hagreen said: ‘We go and see her every day when we drop the children off at school. It’s so hard, every time we drop them off we think there should be three going in, not two and one in the cemetery.

‘Fifi was clever, caring, kind natured and told the best bedtime stories to her sister.

‘She was amazing, she was laughing until the end and handled everything with dignity. She did not feel sorry for herself at all.’

Now to honour Fifi’s memory, the family is raising awareness of DIPG.

Working with other families, including Fiona Govan who created the petition in honour of her three year old grandson Logan who died of DIPG, Mrs Hagreen is calling on the government to invest in more funding, research into the causes and to improve treatment options. To sign the petition click here. 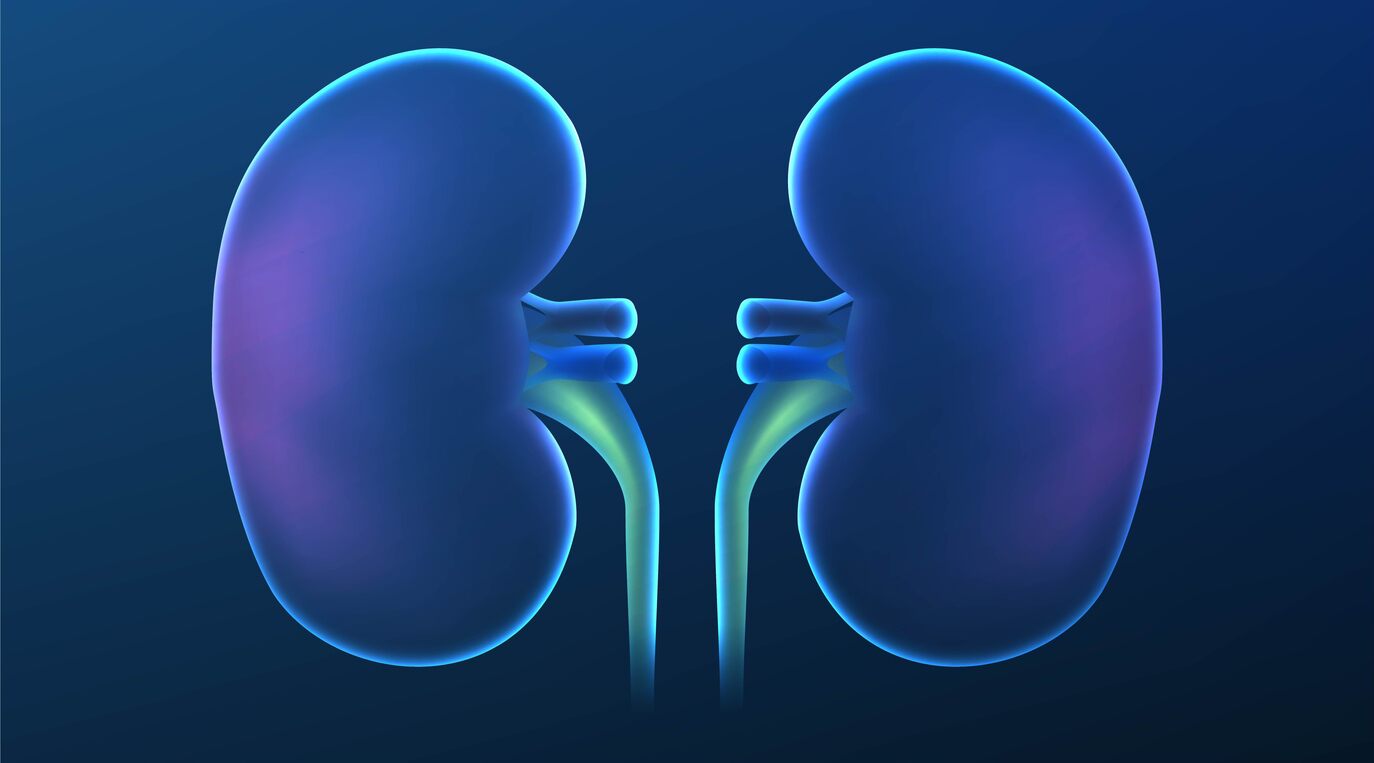