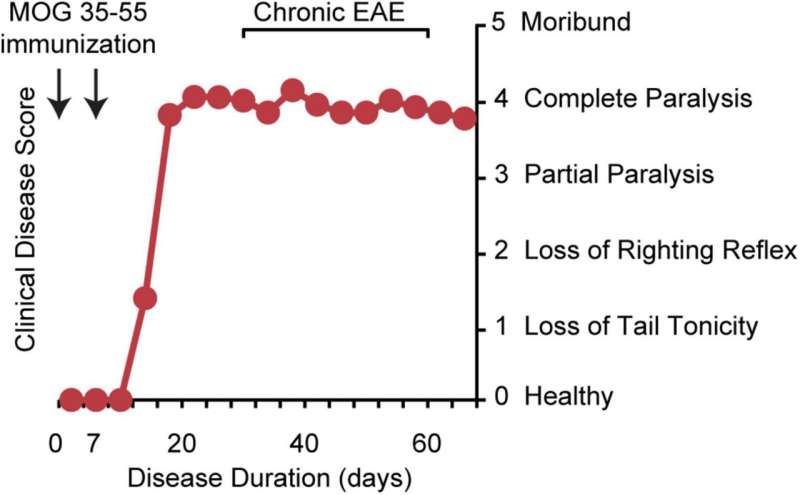 A new study from UCLA researchers identified an animal model that could be used to study treatments for improving disabilities in multiple sclerosis patients.

Multiple sclerosis (MS) is an autoimmune and neurodegenerative disease in which the immune system attacks nerves in the brain and spinal cord. There are numerous treatments aimed at immune mechanisms and reducing MS relapses, but none is designed to protect cells in the brain and spinal cord from damage. Existing treatments have limited effectiveness in slowing disability accumulation and none actually improve disabilities.

Dr. Rhonda Voskuhl, MD, the Director of the UCLA Multiple Sclerosis Program, and Dr. Allan Mackenzie-Graham, Ph.D., an associate professor of neurology, have identified an animal model that shares many similarities with progressive MS.

Previously, acute and relapsing forms of experimental autoimmune encephalomyelitis (EAE), a mouse model characterized by inflammation within blood and spinal cord, played a central role in development of current anti-inflammatory treatments for MS.

Here, Voskuhl and MacKenzie-Graham reported brain MRI and neuropathology analyses in a chronic form of EAE, revealing many features of neurodegeneration that are shared with MS. Beyond spinal cord, findings included effects on the cerebral cortex, cerebellum, and optic nerve, among others.

In the future, this model can be used by researchers to discover targets for treatments that improve walking, cognitive, coordination and visual disabilities in MS.