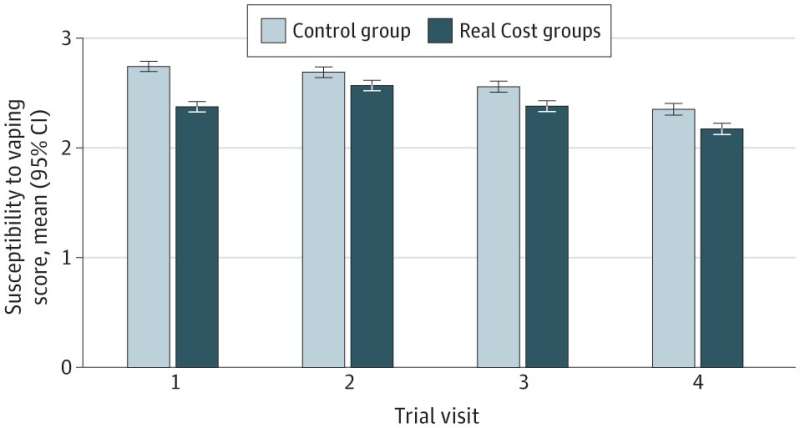 A randomized, controlled study with over 1,500 US teen participants from across the nation tested the effectiveness of digital vaping prevention ads. Researchers from UNC Hussman School of Journalism and Media, UNC Gillings School of Global Public Health and UNC Lineberger Comprehensive Cancer Center discovered that “Real Cost” ads lowered the extent to which teens were open to vaping. The vaping prevention video ads, produced by the Food and Drug Administration (FDA), also lowered openness to cigarette smoking.

Researchers determined similar effectiveness for “health harms” versus “addiction” themed ads. The former focused on the harmful chemicals emitted by vaping devices and the potential for lung damage caused by vapes. The latter focused on the highly addictive nature of vapes and consequences of nicotine addiction, such as loss of autonomy.

Collaborating to move the needle

“The 2022 data just released by the CDC indicate that more than 2.5 million middle and high school kids nationwide—over 14% of all US teens—continue to vape, putting them at risk for a lifetime of nicotine addiction.” Noar added, “the results of our study indicate that communicating about the health harms and addiction risks of vaping is an evidence-based strategy that discourages youth from vaping.”

Since the introduction of vaping devices, state and local health departments have created their own anti-vaping messaging geared to teens in efforts to discourage vaping, as have national health organizations like the FDA. The Real Cost ads used in this online study were shown to 1,514 teens (75% male) aged 13–17 years who were either open to vaping or were e-cigarette users when they enrolled in the study. Each saw three, randomly ordered, 30-second video ads online at each of three weekly study visits.

Real Cost ads reduced openness to vaping compared to control videos, which were neutral informational videos about e-cigarettes created by the research team. Real Cost vaping prevention ads also reduced openness to smoking cigarettes compared to control videos, a promising set of findings given that thousands of teens nationwide have been exposed to the FDA’s nationwide Real Cost campaign.

Noar and UNC Gillings colleagues Distinguished Professor Noel Brewer, Ph.D., and Assistant Professor Marissa Hall, Ph.D., advanced the study knowing that some experts are concerned that anti-vaping messages might inadvertently steer teens towards cigarette smoking. But that concern was not borne out. In fact, the researchers saw a positive effect in the data: the Real Cost video ads reduced teens’ openness to cigarette smoking as well as to vaping. “It’s very hard to change anyone’s mind about smoking because people have been inundated for years with anti-smoking information,” said Brewer. “The spillover effects of anti-vaping ads in discouraging smoking offers an important new tool to tobacco control.”