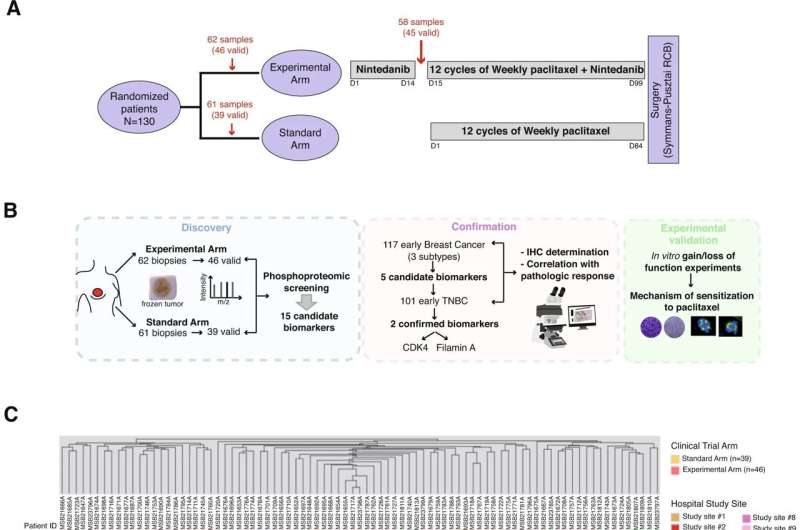 Precision oncology aims at pointing out which drug is likely to work in every specific cancer patient. At the moment these targeted therapies are only available for 5% of cancers. The study carried out by CNIO researchers Miguel A. Quintela-Fandino and Silvana Mouron, together with oncology units from several Spanish hospitals, has discovered a way to identify whether one of the most commonly used drugs in conventional chemotherapy for various types of cancer, paclitaxel, will be effective in each patient.

The work has been published in Nature Communications.

Quintela and Mouron, however, did not perform a genomic analysis (of genes), but a proteomic analysis (of proteins). They had shown in previous research that, even when a large number of oncogenic mutations are present, only a small number of protein alterations appear.

In other words, while in most cancers no common genetic markers are found in patients who do not respond to a given drug, common protein-related markers can indeed be found. Proteins are the molecules that carry out most of the functions of cells; the genes (in the DNA molecule) contain the information to produce all the proteins needed by the organism.

The CNIO group analyzed HER2-negative breast cancer samples from 130 patients treated with paclitaxel, one of the most widely used drugs against breast, ovarian, lung, bladder, prostate, melanoma, esophageal and other cancers. They looked for similarities in the expression of proteins in the samples from patients who did respond to paclitaxel, and found two proteins specifically related to paclitaxel response: CDK4 and filamin.

The researchers showed that this association appears when paclitaxel is used, but not when other drugs are used.

“We found that patients with high levels of CDK4 and filamin have a positive response rate in 90% of cases,” says Miguel A. Quintela-Fandino, principal investigator and head of the CNIO Breast Cancer Clinical Unit.

“The study identifies the first specific predictive factors for a conventional chemotherapy treatment, for which only indirect or imperfect predictive markers were known until now. Instead, CDK4 and filmanin A are associated with paclitaxel activity in a very precise manner,” adds the CNIO researcher.

The work is not immediately applicable to the clinic. “For this discovery to be incorporated into the oncological therapeutic arsenal, epidemiological and clinical studies would have to be carried out,” says Quintela-Fandino.