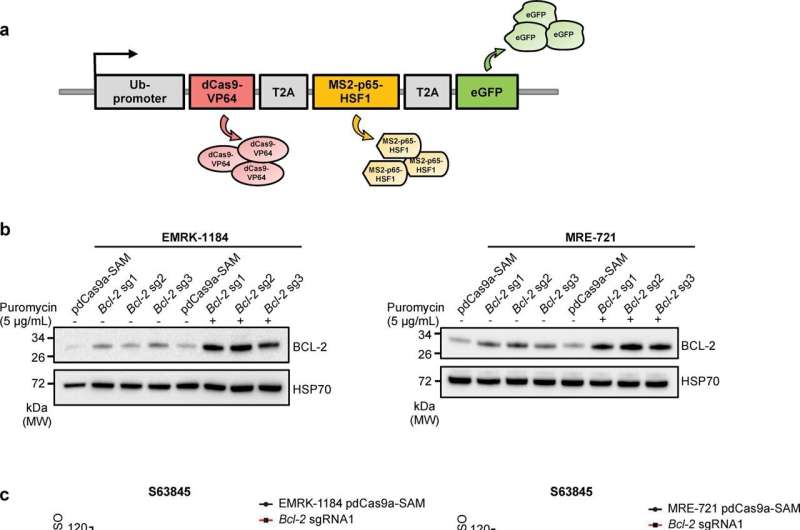 A powerful new genome editing technique is enabling researchers to replicate human diseases with unprecedented accuracy, promising to revolutionize the drug discovery process for a range of cancers.

Advanced by a WEHI team, the technology can activate any gene—including those that have been silenced—allowing new drug targets and causes of drug resistance to be explored on an unmatched level.

Researchers have leveraged the unique technology to replicate an aggressive form of lymphoma for the first time, which they used to identify a gene responsible for triggering drug resistance to a new treatment for blood cancers currently used in Australia.

Lymphoma is the most common blood cancer in Australia, with about 6,500 Australians diagnosed each year. Double hit lymphoma (DHL) is an aggressive subtype that affects white blood cells called B lymphocytes, or B cells.

In a first, the research team was able to enhance a genome editing technology, known as CRISPR activation, to accurately mimic DHL. Project lead Professor Marco Herold said the team focused on DHL as the disease is difficult to treat, in part due to a lack of efficient pre-clinical modeling.

“Without the ability to model a disease, there are limited opportunities to properly test which drugs will be effective for it in the clinic,” said Professor Herold, who established and now leads one of Australia’s most advanced CRISPR laboratories at WEHI.

“The technology is a game-changer for the scientific community and people in the clinic as it allows us to mimic diseases like DHL and properly test drug treatments against them for the first time.

“This is significant when you think of the plethora of human diseases that could be better modeled by using this tool.”

The research has sparked international interest, with the WEHI team working closely with researchers from Nanjing University (China) and Genentech (US), a member of the Roche Group, to develop the technology.

The findings are published in Nature Communications.

Venetoclax is the result of a research collaboration between WEHI and companies Roche, Genentech (a member of the Roche Group) and AbbVie, and is based on groundbreaking scientific discoveries made at the Institute over three decades. It was developed by Roche, Genentech and AbbVie.

The anti-cancer drug is based on a discovery made at WEHI in the late 1980s, that a protein called BCL-2 helps cancer cells survive indefinitely.A1 is a pro-survival protein of the BCL-2 family. Activation of this gene has been reported in diverse forms of cancer, including leukemia, lymphoma, melanoma, stomach cancer and breast cancer.

While A1 had been thought to play an important role during cancer progression, Ph.D. student and first author, Yexuan Deng, said this had remained unverified—until now. “As DHL lymphomas from our model can be killed with venetoclax, we were able to leverage this to prove for the first time that A1 is a major factor in resistance to this drug,” Deng said.

While cancers are often triggered by switching genes on, researchers have largely only been able to switch them off in previous disease models. Project lead Associate Professor Gemma Kelly said the team was able to engineer drug resistance because their model can activate any gene—even those that have been silenced.

“We used this model’s unprecedented ability to switch on A1, which allowed us to confirm the protein as a resistance driver,” Associate Professor Kelly said. “Our research will allow for more genes to be activated in other models to better understand cancer drivers and, critically, to determine other causes of drug resistance.”

Co-lead author, Dr. Sarah Diepstraten, said the findings reveal A1 to be a promising drug target for DHL.

“That discovery was made because we were able to create a model for DHL that allowed us to switch on any gene,” Dr. Diepstraten said. “This proves the power of our technology when it comes to modeling human diseases and exploring why drug targets work or fail, on an unmatched level.”