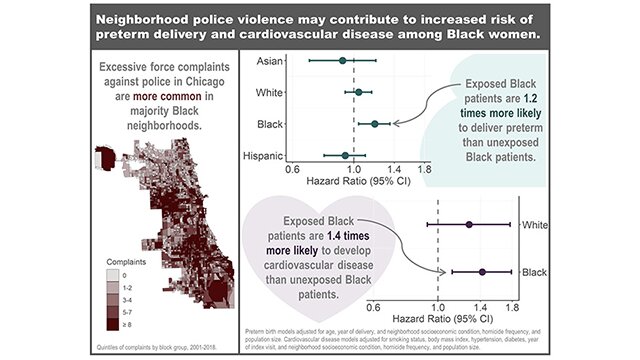 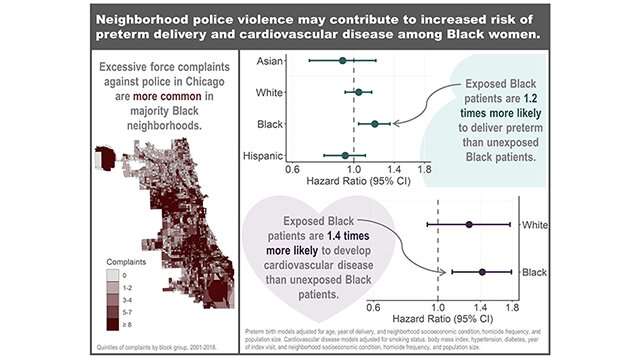 Ten-year analysis links police complaints with hospital records, suggesting that the consequences of police misconduct may begin in utero and persist across the life course.

It is well known that Black women experience disproportionately high rates of preterm delivery and cardiovascular disease. New research from Northwestern University suggests that one contributor to these inequities may be the stress created by police violence occurring in Black women’s neighborhoods.

The study, “Complaints about the excessive use of police force in women’s neighborhoods and subsequent perinatal and cardiovascular health,” was published Jan. 19 in Science Advances.

The multidisciplinary study conducted by experts in the fields of psychology, sociology, epidemiology, anthropology and medicine is the first to look at everyday forms of police misconduct and the health outcomes of women, adding to growing evidence that suggests police violence adversely affects the health of Black communities.

Motivated by frequent, high-profile police violence in Black communities, corresponding author Alexa Freedman, a postdoctoral fellow in the Institute for Policy Research at Northwestern, said the research team wanted to investigate whether formal complaints about excessive force by police (EFP) were associated with the health of women in Chicago.

To do so, the researchers used data on complaints filed against Chicago police for excessive force, compiled by the Invisible Institute. The researchers calculated the frequency of EFP complaints in each of Chicago’s neighborhoods. These data were then linked to the electronic health records of two separate groups: pregnant patients (67,976) and healthy adults (6,773) who did not have cardiovascular disease at their initial visit with a doctor.

“We were encouraged that our findings were consistent across multiple sensitivity analyses, especially the ones that compared pregnancy outcomes among patients with multiple deliveries. These analyses improved control of individual and neighborhood characteristics that might confound the results,” Freedman said.

The findings also speak to the potential public health impact of police misconduct.

“The results suggest that police misconduct may have implications for health beginning at the earliest stages of development, which we know has important repercussions for long-term health,” said Andrew V. Papachristos, professor of sociology and director of the Northwestern Neighborhood & Network (N3) Initiative.

“These studies are an important step forward for research on health inequity,” Miller said. “It’s long been clear that excessive police force in the neighborhood is a potent and persistent stressor for Black residents of Chicago. These studies extend knowledge by suggesting there may consequences for women’s reproductive and cardiovascular health.”