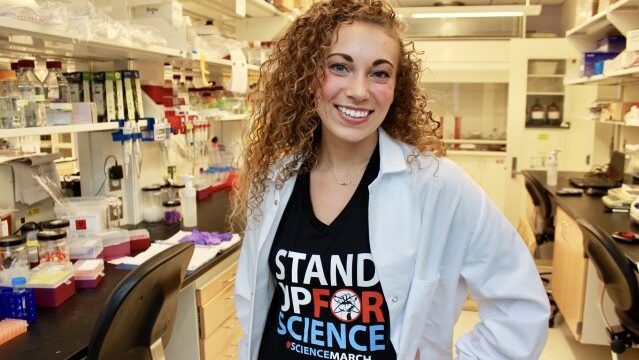 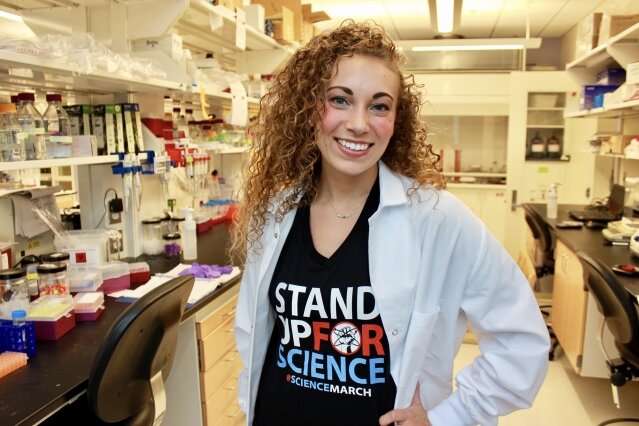 Normally, the immune system is able to differentiate between healthy and abnormal cells. Peptides, fragments created by the synthesis and breakdown of proteins inside each cell, are presented on the surface as antigens and act as signals to immune cells whether the cell should be left alone or flagged for destruction and removal.

Because cancer cells display a small number of tumor-associated antigens and antigens that result from genetic mutations, they can be targeted by the immune system. However, cancer cells can develop strategies for evading detection by the immune system. Cancer immunotherapies counteract those strategies, but only for some cancers and only in some patients. Those that do work produce powerful results.

Researchers and clinicians are exploring how to improve the success rate of immunotherapies for more cancer types and patients. In this effort, they are combining immunotherapies with targeted therapies, small molecules designed to inhibit selected protein targets in the cell. To design effective combinations, a better understanding of how targeted therapies change the immunopeptidome—the repertoire of surface-presenting peptide antigens—is needed.

A team of researchers including Koch Institute members Forest White, the Ned C. and Janet Bemis Rice Professor and member of the MIT Center for Precision Cancer Medicine, and Douglas Lauffenburger, Ford Professor of Biological Engineering, Chemical Engineering, and Biology, developed a technique for accurately quantifying changes in the immunopeptidome.

In a study led by graduate student Lauren Stopfer and appearing in Nature Communications, researchers used the platform to analyze the effect of CDK4/6 inhibitors, a class of known anticancer agents, on the immunopeptidome of melanoma cell lines. In addition to identifying potential antigen targets for drug development, their results highlighted the potential of CDK4/6 inhibitors to make an effective partner for certain kinds of immunotherapies. Ultimately, the platform could help cancer researchers design new targeted drugs and immunotherapies or clinical trials for combinations of these types of therapies.

Currently, in order to examine how a cell changes its immunopeptidome in response to exposure to a drug or other perturbation, researchers perform a technique known as mass spectrometry to quantify the foldchange, or relative change in magnitude between subsequent measurements, of the expression of peptide antigens. However, most current mass spectrometry-based methods do not provide a complete—or even reliably accurate—picture of immunopeptidome dynamics.

The process of preparing a sample for mass spectrometry analysis can result in substantial losses of antigens. In isolating the relatively small number of antigen peptides from the entire contents of cells, there can be significant variation in the proportion of peptide antigens recovered from sample to sample or from peptide to peptide. Existing methods for accounting for how many antigens are lost are laborious and have limited effectiveness.

Foldchange alone does not indicate the magnitude of a change in peptide antigen levels. For example, a three-fold increase in antigens may mean an increase from 10 to 30 antigens, or it may mean an increase of 1,000 to 3,000. Because different drugs require different antigens to be present at different quantities in order to be effective, an accurate count of the change in antigen is needed to identify drugs that elicit the optimal response in the cell. Furthermore, the measurement may be undermined by underlying “noise” in the sample—data that can cloud the relative proportion of observable “signal” produced by the antigen of interest.

“People will say that you need a certain number of a peptide antigen in order for an immunotherapy to work, but, right now, that number is typically based on anecdotal evidence,” says White. “To make truly informed decisions about immunotherapy options, there needs to be a way to quantify antigens very accurately and very reliably.”

The new platform enables the accurate quantification of peptide antigens presented at the cell surface, accounting for variation in sample processing and giving an absolute number of detectable peptides. Using a widely available ultraviolet light-based technology, the method inserts peptides loaded with heavy isotopes into genetically engineered versions of the molecules that present the antigens on the cell surface, class I major histocompatibility complexes (MHCs). The labeled peptide-MHC (pMHC) complexes are then added to samples of the contents of whole cells. When the antigen peptides are extracted, the heavy isotope labeled peptides can be used to account for how many antigens have been lost to processing.

To determine how many of a specific antigen are presented on cells, heavy isotope labeled pMHCs can be added to samples of cell contents at different concentrations. The resulting standard curve, or graph, can be used to extrapolate the number of peptide antigens.

The researchers used the new platform to quantify how CDK4/6 inhibitors change the repertoire of antigens presented on the surface of melanoma cells.

Melanoma can be treated effectively with a class of immunotherapy called immune checkpoint blockade inhibitors, but as many as 40 percent of patients do not respond to these therapies. Recent studies have suggested that checkpoint blockade immunotherapies may be more effective in more patients when combined with other anticancer agents, particularly those that stimulate an immune response, such as CDK4/6 inhibitors. CDK4/6 inhibitors are thought to strengthen the immune system’s response to cancer in part by increasing expression of MHCs, thereby rendering cancer cells more visible to the immune system.

Researchers profiled peptide antigen repertoires in four cell lines of melanoma treated with the CDK4/6 inhibitor palbociclib at low and high doses, finding that low doses of the palbociclib resulted in a larger increase of MHC presentation than the higher-dose therapy. At lower doses, the immunopeptidome showed increases in tumor-associated peptide antigens derived from intracellular pathways known to be affected by the inhibition of CDK4 and CDK6. These results add to a growing body of evidence that CDK4/6 could be used together with checkpoint blockade to increase the immune system’s ability to respond to tumors, and suggest that CDK4/6 inhibitors and other treatments like them could be used to tune which peptides are presented to the immune system.

The researchers were also able to identify an antigen, a serine-phosphorylated IRS2 peptide, that occurs exclusively in malignant tumors. They found that it was expressed at high levels, demonstrating that the platform could also be used to help cancer researchers identify immunotherapy targets.

Because of its sensitivity and speed, the new platform could be used in the clinic to develop treatment strategies on a patient-specific basis. The multiplexed platform can analyze many samples in tandem, allowing for the short time scale critical to clinical trials. Its sensitivity allows it to be used on small samples, including samples from individual patients’ tumors. Analysis of peptide antigen repertoire changes could be used to optimize the order and timing of therapies for the greatest impact, in addition to calibrating cancer cells’ antigen presentation for targeting by immunotherapies.