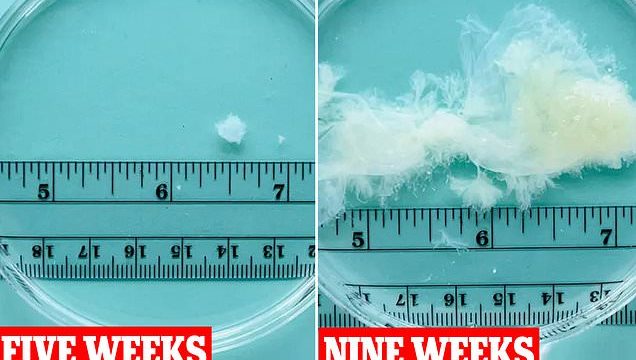 Pictured: What fetus cell tissue looks like in its first nine weeks – a period where abortion is banned in 14 states

In photos revealed by the MYA Network, fetal cell tissue does not resemble an infant, but instead just small particles within a petri dish.

That point to which life begins – and a fetus or baby can be considered human – has been under fierce debate in the US.

Over summer, the Supreme Court overturned the landmark 1973 Roe v Wade ruling that gave federal protections to abortion, allowing states to regulate the procedure themselves.

In 13 states, abortion is totally banned no matter the stage of pregnancy. The practice is banned by the ninth week in 14 states. 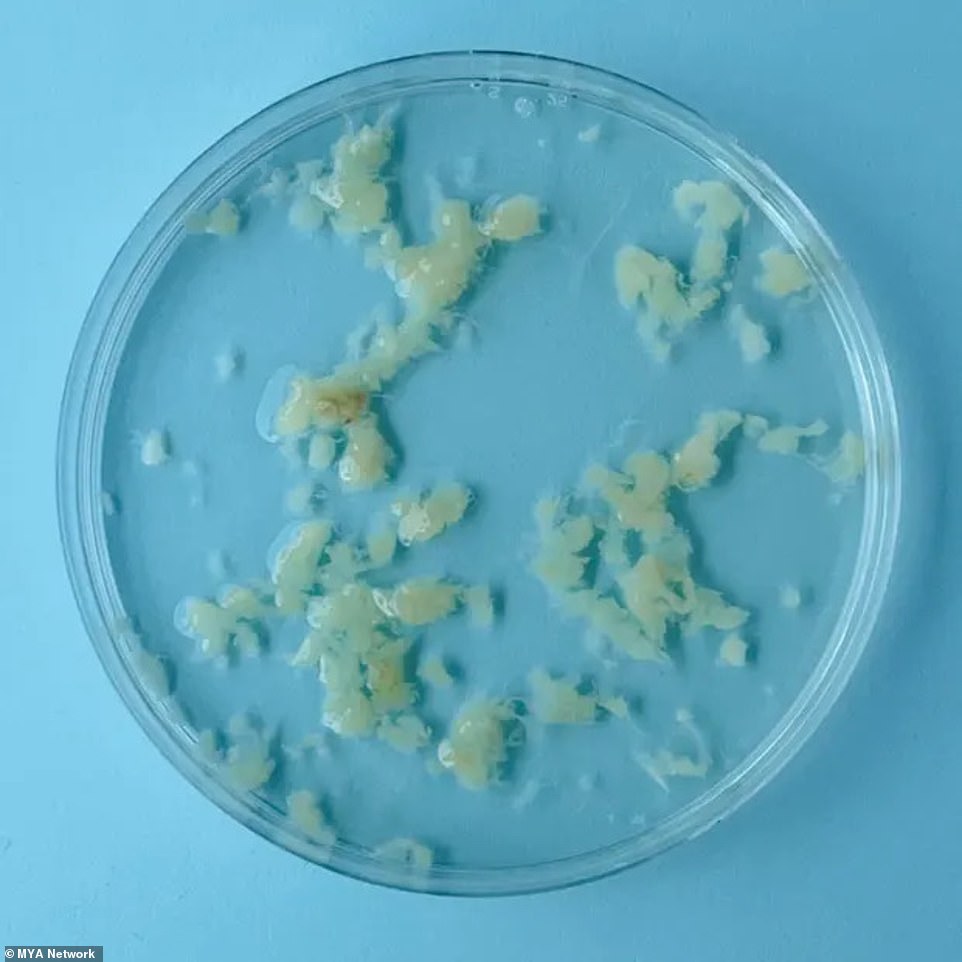 Pictured above is fetal tissue at four weeks’ gestation. Oklahoma has a law on the books that says abortion is banned as soon as the egg is fertilized in the womb.

At four weeks, the unborn fetus is a smattering of cells.

Home pregnancy tests can typically detect HCG, the hormone produced during pregnancy, as early as 10 days after conception.

Most women will take a home test soon after missing a period, though some very sensitive tests can pick up the presence of HCG a few days beforehand.

At this point in pregnancy, it is illegal to obtain an abortion in Alabama, Arkansas, Idaho, Kentucky, Louisiana, Mississippi, Missouri, Oklahoma, South Dakota, Tennessee, Texas, West Virginia, and Wisconsin. 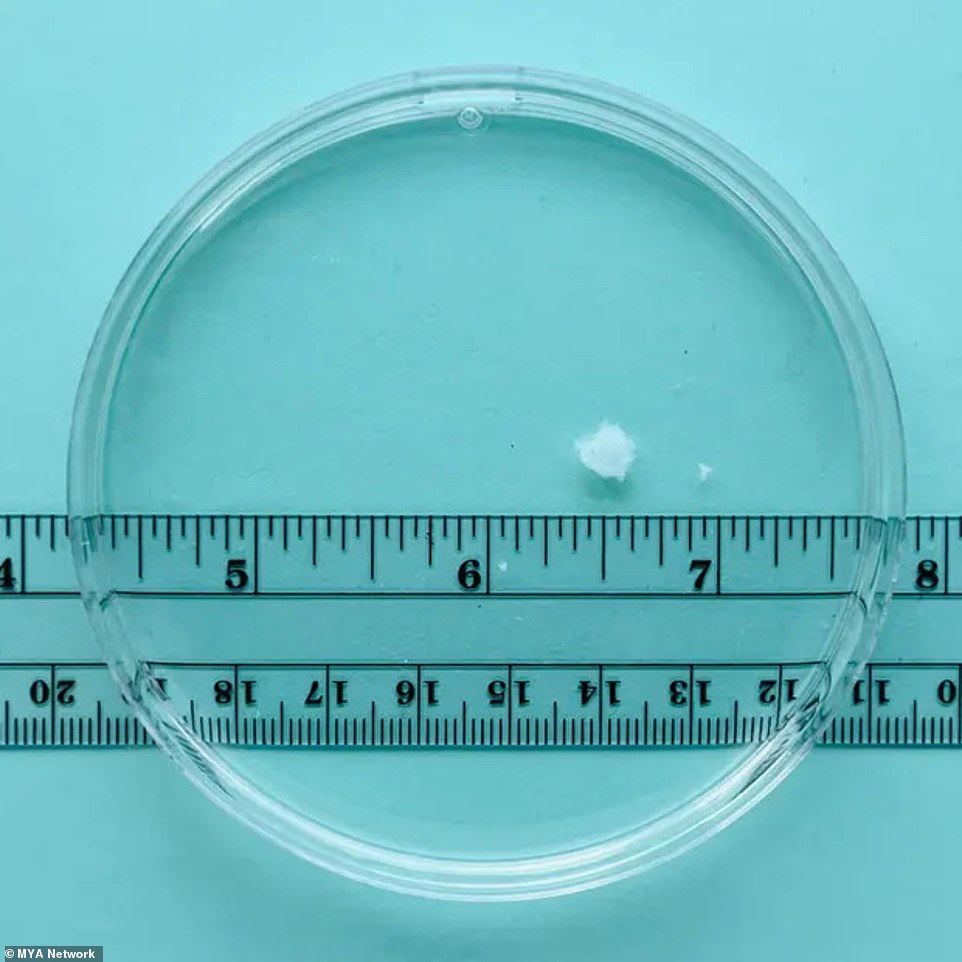 Above is fetal tissue at five weeks’ gestation. Home pregnancy tests can typically detect HCG, the hormone produced during pregnancy, as early as 10 days after conception. At this point, the embryo is less than an inch in diameter.

At five weeks, the fetal tissue is less than an inch in diameter.

An embryo at the six week mark is only about four weeks old, because the pregnancy actually begins at the parent’s last menstrual period.

At that point, most women do not know they are pregnant.

A flurry of states have passed legislation over the past decade banning abortion at six weeks in so-called ‘heartbeat bills’, including North Dakota, Texas, Louisiana, and Missouri.

Those states passed further restrictive laws after the Supreme Court tossed out the federal guarantee to an abortion in June.

Georgia is the only remaining state with an explicit cut off at six weeks. The other states have since banned the procedure outright with few to no exceptions for cases of rape and incest. 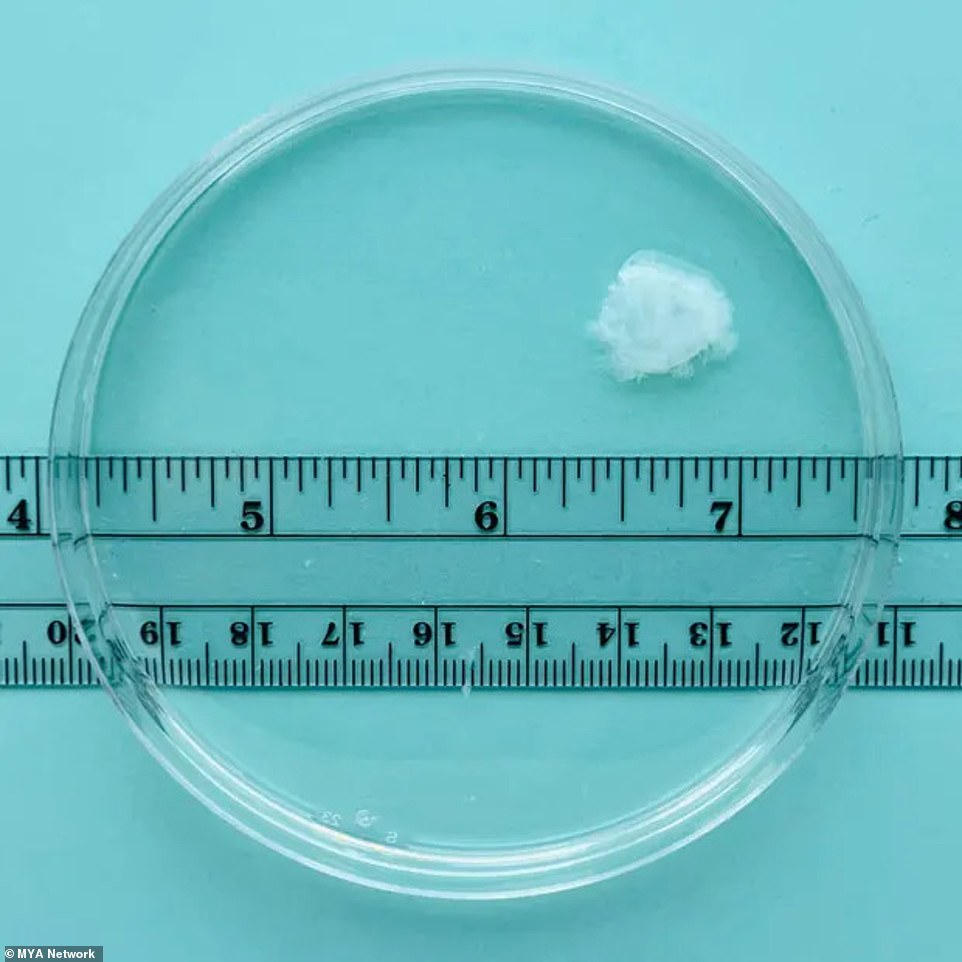 Above is fetal tissue at six weeks’ gestation. Several states such as Texas have passed a wave of ‘heartbeat’ bills, a term that OB-GYNs say is a misnomer. The beating is actually a series of electrical pulses emanating from the cluster of cells that will become the heart.

The term has rallied the anti-abortion movement, which grew increasingly emboldened in the lead up to the Supreme Court’s decision as more states passed bans at different points in pregnancy.

But the term ‘heartbeat bill’ is a misnomer, according to obstetrician gynecologists. Rather, ‘cardiac activity’ is more accurate.

The heart begins developing in the embryo at around three weeks.

At the six week point, those beats the mother and doctor hear are actually electrical impulses captured by the ultrasound machine and translated by the machine into the sound of a heartbeat, according to Dr Nisha Verma, an OB-GYN who practices in Georgia. 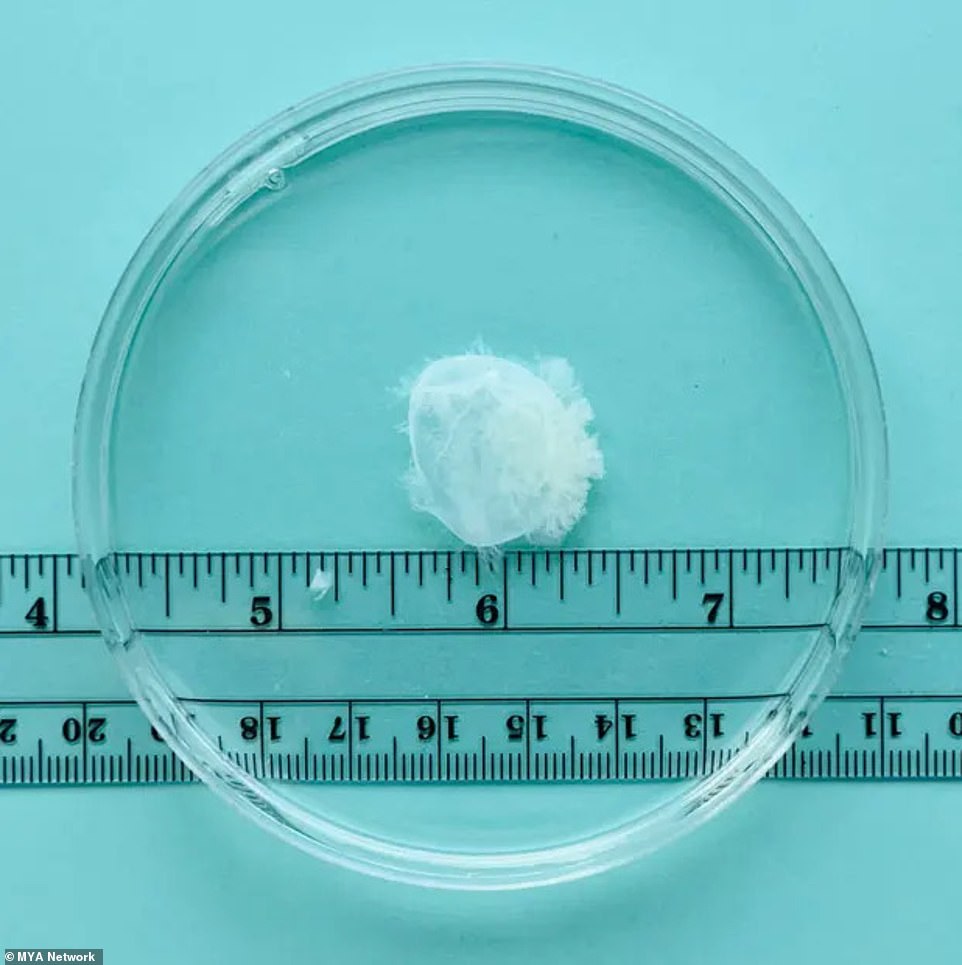 Above is pregnancy tissue at seven weeks. At this point, it is illegal to obtain an abortion in 14 states. In June, the Supreme Court overturned the 1973 Roe v. Wade ruling, which guaranteed access to a legal abortion. This opened the door to a deluge of abortion bans at various points in pregnancy.

It is not until around 17 to 20 weeks that the four chambers of the heart have developed and can be detected on an ultrasound.

At that point, the term ‘heartbeat’ in the context of abortion bans is accurate. 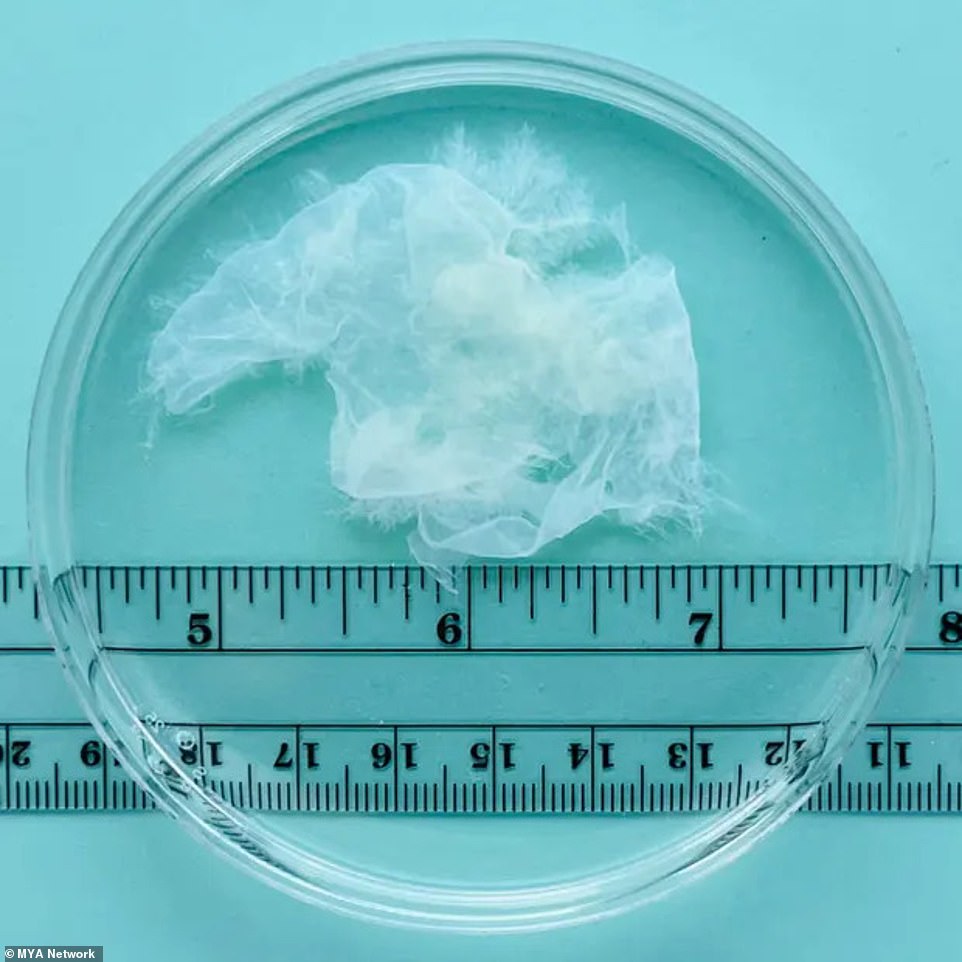 ‘People who have been pregnant may recognize the term heartbeat as something they heard in their first ultrasound appointment,’ Dr Verma said.

‘As a physician, I often use that language with my patients and their families, because they can connect with it, but that doesn’t mean that it’s clinically accurate or that it should be used to restrict my patients’ access to medical care,’ she added. 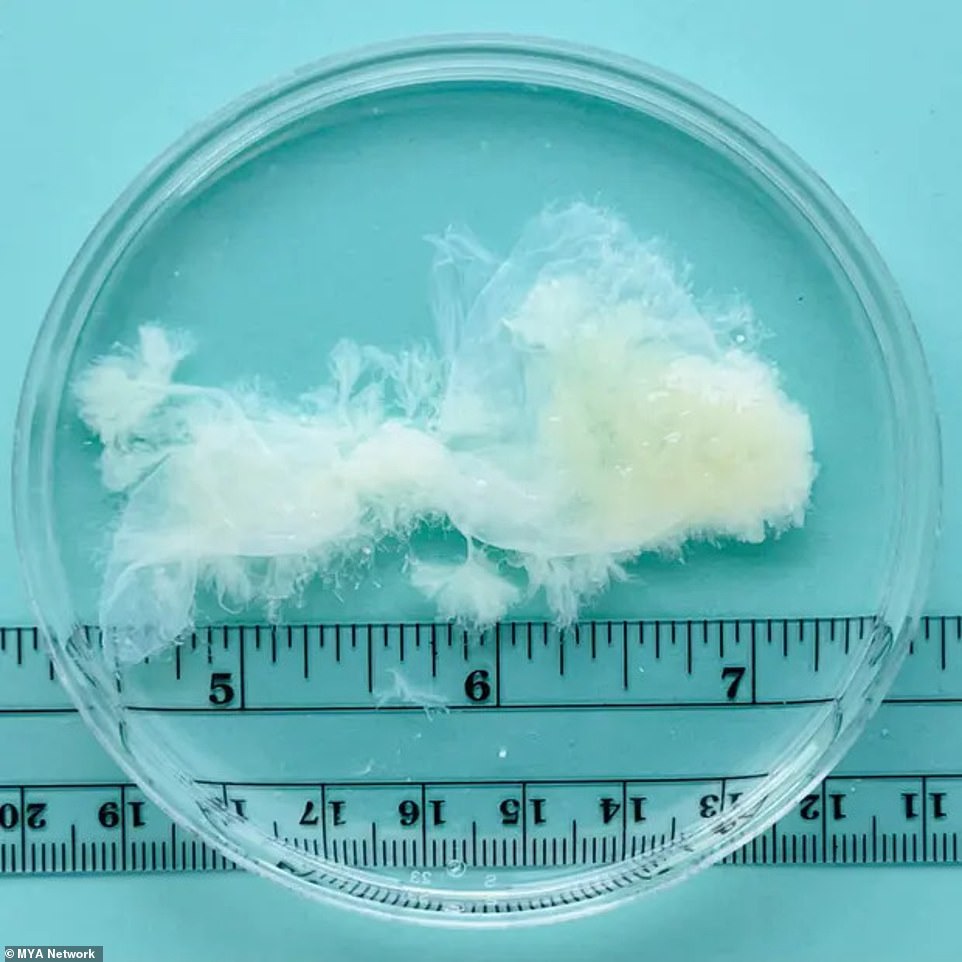 This image shows the gestational sac of a nine-week pregnancy. At this point, the developing baby goes from being called an ’embryo’ to a ‘fetus,’ though it still does not resemble a baby.

The developing baby is referred to as an embryo until the ninth week of gestation begins.

The gestational sac pictured above is the large cavity of fluid that supports the developing baby in early pregnancy. 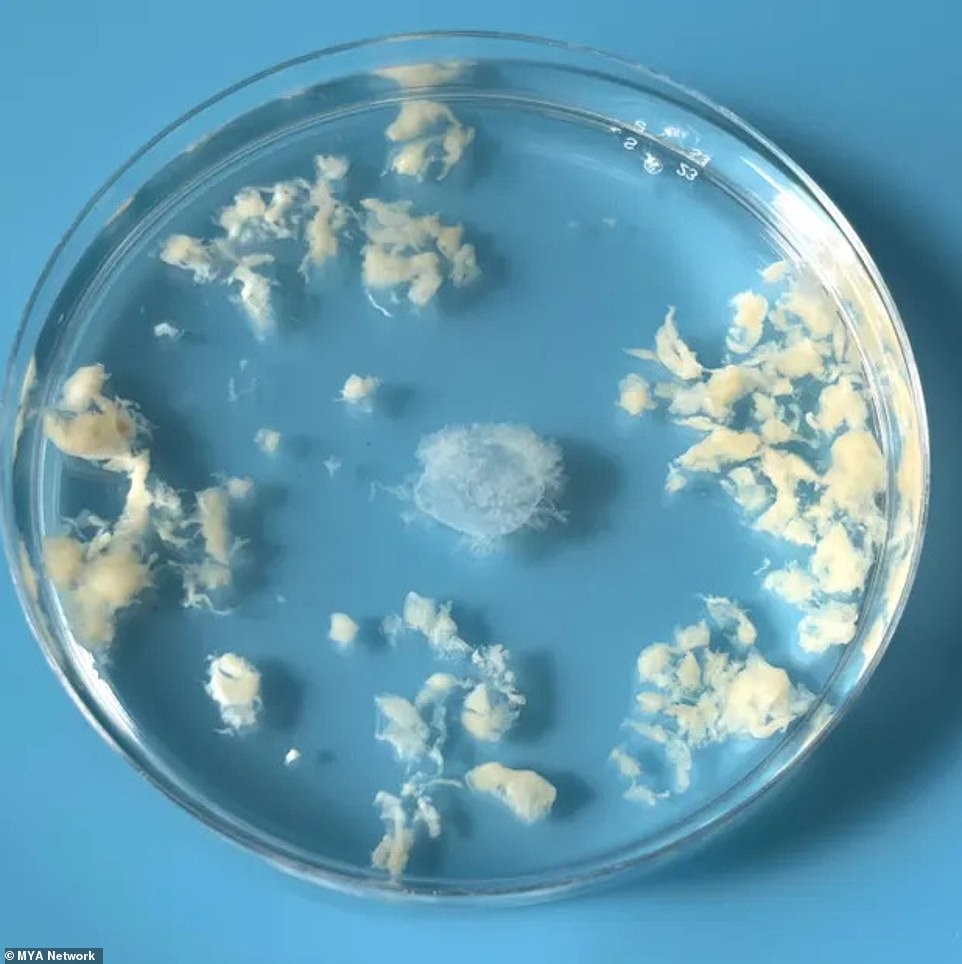 This image shows decidua, or tissue to support the pregnancy, and the gestational sac. The gestational sac becomes known as the amniotic sac, which protects the fetus from injury and helps regulate its temperature.

At six to 10 weeks, the gestational sac becomes the amniotic sac. The thin-walled sac encloses the fetus, protecting it from injury and helping to regulate its temperature. 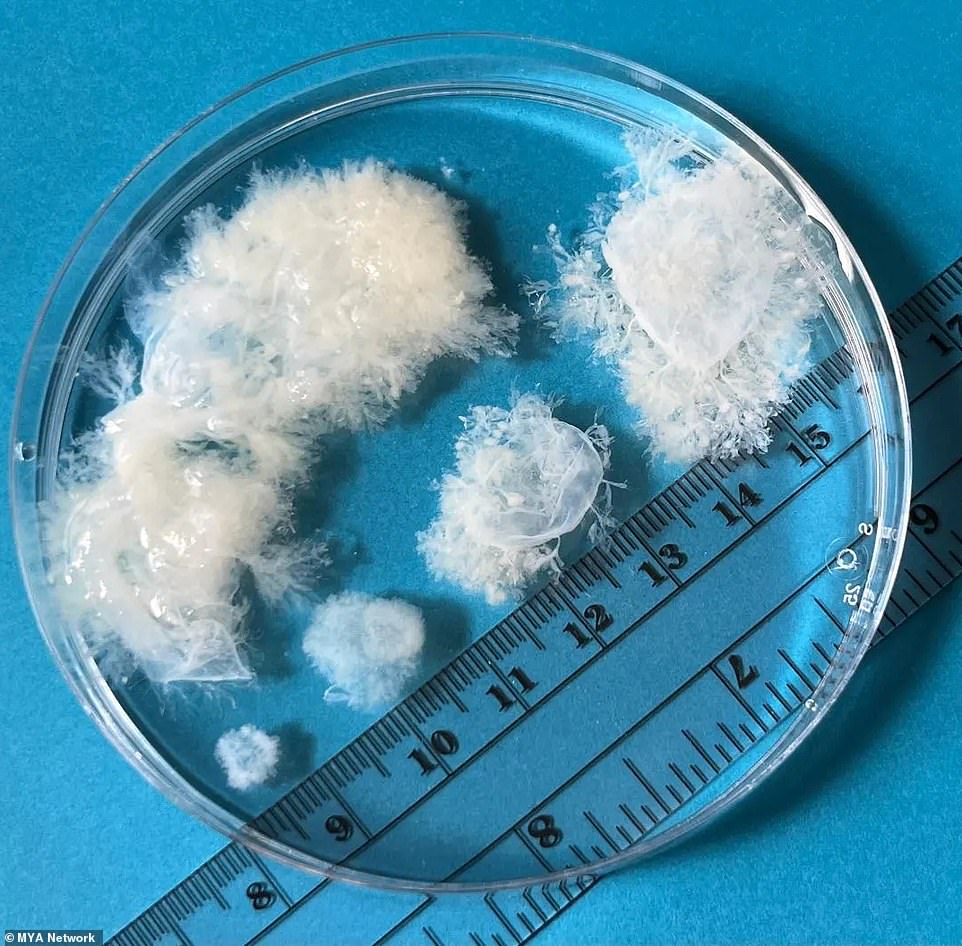 Fetal tissue is shown from the youngest point in gestation, four weeks, through nine weeks.  Dr Joan Fleischman, part of the MYA Network, told the Guardian that most women in the early stages of pregnancy don’t know what their unborn babies look like and are shocked when they see the fetal tissue for themselves. 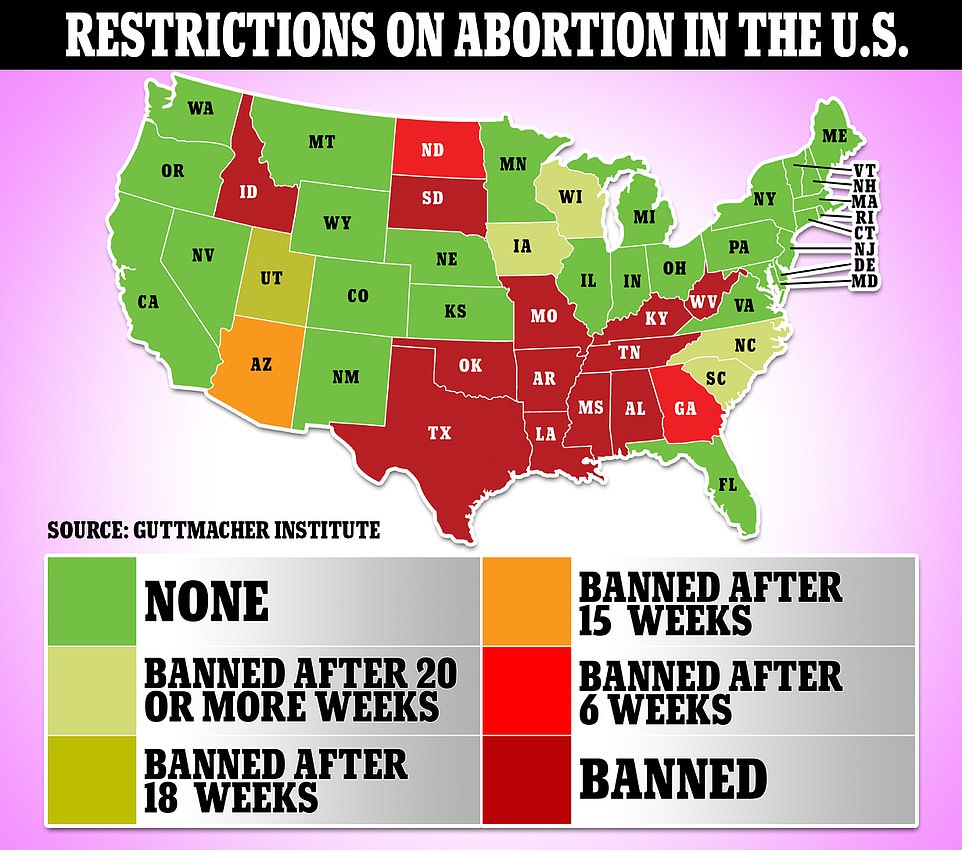 Abortion before 15 weeks has been banned by 14 states. Some states have abortion bans on the books that stretch back to before the court’s 1973 decision legalizing abortion up to the point of viability, such as Wisconsin.

Women who undergo an abortion often misunderstand what their developing babies look like at the point of the procedure, according to Dr Joan Fleischman, part of the MYA Network.

‘They are stunned by what it actually looks like,’ Dr Fleischman told the Guardian.

It is common at political demonstrations revolving around abortion policies to see anti-abortion protesters carrying posters displaying images of near fully-developed fetuses in the womb.

But those posters are very misleading, Dr Fleischman said.

‘That’s when I realized how much the imagery on the internet and on placards – showing human-like qualities at this early stage of development – has really permeated the culture. People almost don’t believe this is what comes out.’

Dr Michelle Gomez, a family medicine doctor part of the MYA Network, added that, ‘We’re just putting out the information and the facts to counter the misinformation.