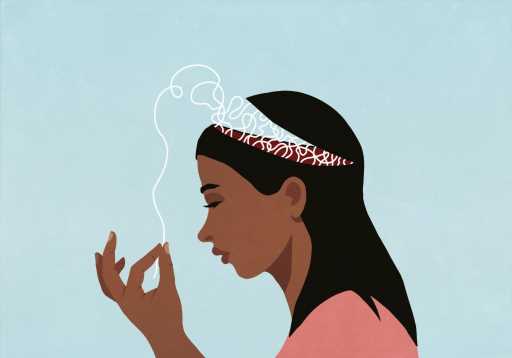 As if the world required any more misunderstanding around mental health, a new study showing depression isn’t caused by low levels of serotonin is, indeed, contributing to it. “News” to which every Escitalopram lover responded: “Yay, I can’t wait to try and convince more people who already don’t vibe with mental health — including social media who will invariably misinterpret this study — that, yes, this antidepressant is very much necessary.”

The research in question is a 2022 study published in Molecular Psychiatry that considers 17 studies and their findings regarding the link between brain chemistry and depression. Results showed their review of research on serotonin — the “happy hormone” — revealed “no convincing evidence that depression is associated with, or caused by, lower serotonin concentrations or activity.”

“Most studies found no evidence of reduced serotonin activity in people with depression compared to people without, and methods to reduce serotonin availability using tryptophan depletion do not consistently lower mood in volunteers,” the study’s authors wrote.

They continued: “The idea that depression is the result of a chemical imbalance also influences decisions about whether to take or continue antidepressant medication and may discourage people from discontinuing treatment, potentially leading to lifelong dependence on these drugs.”

Sound the warning bells because statements like these can be easily interpreted to mean antidepressants aren’t effective. But instead, what researchers are noting is that targeting serotonin as the main event may be misinformed.

“Many of us know that taking paracetamol can be helpful for headaches and I don’t think anyone believes that headaches are caused by not enough paracetamol in the brain,” Dr. Michael Bloomfield told BBC News.

Furthermore, one of the study’s authors, Joanna Moncrieff, told the news outlet that more research is needed to show how serotonin-targeted antidepressants help — or don’t help — patients beyond the first few months of using them.

(Pause to emphasize more research, not more ignorance. Say it twice and then continue reading.)

“This anti-depressant study is huge,” he wrote on Twitter. “Big Pharma has made billions prescribing wonder drugs to treat depression but there was never any solid scientific evidence that the drugs would work. Now we know that the whole thing was built on a myth. Big Pharma’s greatest scam of all time.”

Not that anyone is surprised by this gross misinterpretation of the findings, but it doesn’t make it any less harmful.

“This research offers analyses to summarize some well-known facts about depression,” Mitch Prinstein, chief science officer for the American Psychological Association, said in a statement to Changing America, according to The Hill. Prinstein also emphasized that “the review’s findings emphasize why it’s critical to advance research to develop and test a variety of personalized psychological treatments,” the publication reported.

“First, depression is a very heterogeneous disorder; there are many different expressions of depression that come from a wide array of causal factors and present themselves differently from person to person,” he continued. “Second, there is no single treatment approach that works for everyone with depression.”

But with 17.3 million American adults struggling with depression on the line, one approach is clear: Continuing research to find the best answers. Period. Hands down. No questions asked.

Before you go, check out some of the best (and most affordable) mental health apps we swear by: