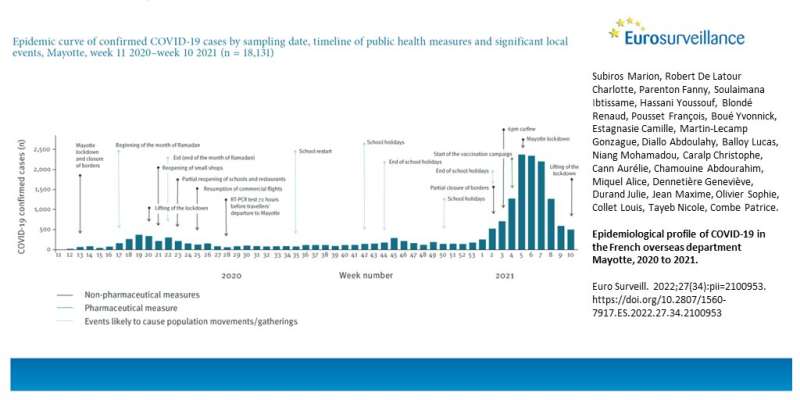 The COVID-19 pandemic together with its challenges hit the French overseas department Mayotte at a time the island in the Indian Ocean faced an unprecedented dengue outbreak with more than 4,000 laboratory-confirmed cases causing interruptions in work, overcrowded primary care services, hospitalizations and deaths. Mayotte is one of the most densely populated French territories with its 279,471 inhabitants and 77% of the population live below the poverty line. Many households lack running water, toilets or showers and there is only one hospital and 54 general practitioners per 100,000 inhabitants on the island.

In their article published in Eurosurveillance, Subiros et al. look at the epidemiology of the COVID-19 outbreak in the French overseas department Mayotte during the first year of the pandemic from March 2020 to March 2021. Moreover, based on their findings, the authors discuss how authorities should take vulnerable populations into consideration when implementing various infection control measures.

In the first wave of the pandemic, the virus spread quickly across the island and the first peak was reached in May 2020. Especially people aged 45 and over were affected, later also the rest of the population. In June, the peak subsided and from July to December viral spread continued at a low level (incidence ratio (IR) 46 per 100,000).

In the beginning of 2021, the situation changed and the cases in Mayotte doubled between mid-December and mid-January. In the second wave, the epidemic reached its peak in February 2021 and affected mainly the elderly population (≥ 65 years). The second peak also affected children, and the IR increased in children for the first time during the pandemic.

The authors acknowledge that the observed limited severity during the first wave in 2020 could be due to the lower transmissibility of the wild strain of SARS-CoV-2 compared with the Beta variant as well as the introduction of severe restrictive public health measures early on in combination with the young population in Mayotte. They also note that the results from the second wave were “probably affected by the higher transmissibility of the Beta variant.”

According to the authors, there have been several factors that might have affected the surveillance and monitoring of the COVID-19 pandemic on the island: in addition to socioeconomic vulnerability, there have been communication difficulties because of misunderstandings of the disease and stigmatization of people with COVID-19 among the population.

Moreover, staying in lockdown was also challenging as two thirds of the populations make their living from informal businesses.

Hence, Subiros et al. speculate that although lockdowns have been effective in mainland France, this response measure might not work within the local circumstances in Mayotte due to the differences in the populations. The authors further propose that their findings “reaffirm the imperative need to develop trusted awareness-raising networks led by community and/or religious leaders in a community such as Mayotte.”