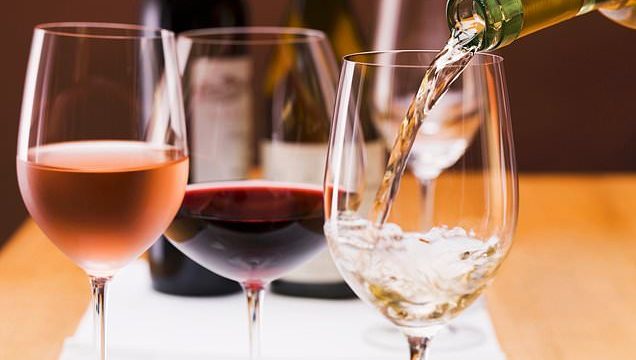 Over-40s can BENEFIT from drinking up to two glasses of wine or bottles of beer every day, scientists say

Over-40s can safely drink a glass of wine or a bottle of beer every day, scientists now say — and it might even be good for you.

And they claim swigging two a night is unlikely to cause any long-term harm to their health.

The study, published in The Lancet, marks the latest piece of evidence to show drinking in moderation is safe — amid a never-ending debate.

For years, adults have been confused by a string of conflicting studies.

But Washington University researchers, who calculated how much people can drink before their health is at risk, insist drinking in moderation has health benefits for middle-aged adults.

They claim alcohol can help ward off heart disease and type 2 diabetes, potentially staving off an early death.

Scientists believe moderate amounts of alcohol can boost levels of good cholesterol and antioxidants in the blood, which can boost heart health.

It is also thought to improve blood glucose levels and boost levels of adiponectin – a hormone that improves insulin sensitivity, protecting against type 2 diabetes.

It provides them with no health benefits and ‘presents many health risks’, raising the risk of injuries, car accidents and suicide, the researchers said. 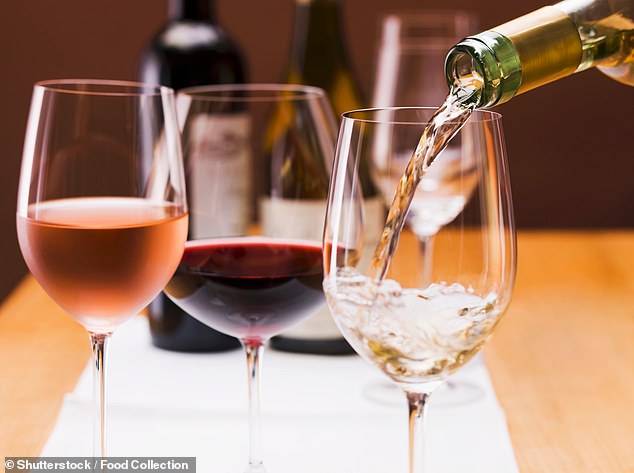 Washington University researchers, calculated how much people could drink before their health was at risk. They found that 40 to 64-year-olds who drink nearly two small glasses of wine or bottles of beer per day would not see their health worsen 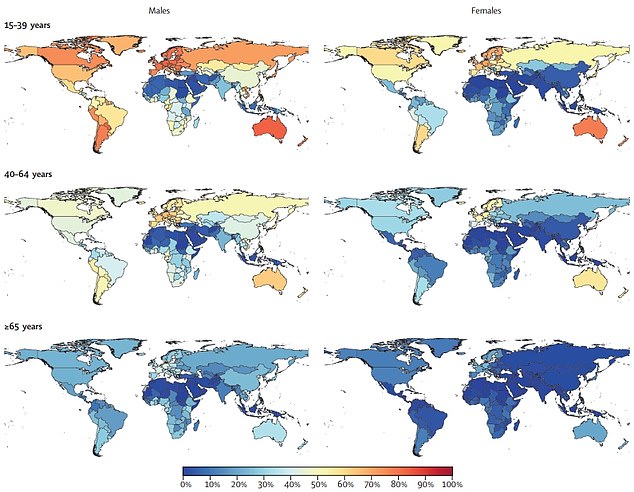 The maps show the proportion of the population consuming harmful amounts of alcohol by sex (male, left, and female, right) and the age group they are in

Younger men were told to stick to just 10ml of wine (two teaspoons) or 38ml of beer (a small shot glass), while women could have two tablespoons of wine or 100ml of beer.

Dr Emmanuela Gakidou, senior author of the study, said older people ‘may benefit from drinking small amounts’ while young people ‘should not drink’.

‘While it may not be realistic to think young adults will abstain from drinking, we do think it’s important to communicate the latest evidence so that everyone can make informed decisions about their health,’ she said.

To keep health risks from alcohol to a low level, the NHS advises men and women not to regularly drink more than 14 units a week.

A unit of alcohol is 8g or 10ml of pure alcohol, which is about:

But the NHS warns the risk to your health is increased by drinking any amount of alcohol on a regular basis.

People who drink as much as 14 units a week are advised to spread it evenly over three or more days, rather than binge drinking.

Women who are pregnant or trying to become pregnant are advised not to drink to reduce risks for the baby.

Britons are currently told to drink no more than 14 units per week, which is around six pints of beer or 10 small glasses of wine.

Research has produced mixed results on the health risks and benefits from drinking alcohol.

Studies have shown tee-totallers are more at risk of an early death than people who enjoy alcohol in moderation.

But drinking too much can raise the risk of cancer, heart disease and liver disease.

And studies have even claimed light consumption is dangerous because it has previously been linked to cancer and poor brain health. It has prompted some to urge people to avoid alcohol completely.

Some 1.78million people worldwide are thought to have died in 2020 due to alcohol consumption, with men aged 15 to 49 most at risk.

Using this, they created a model to calculate when the risks of drinking outweighed any benefits.

Adults aged 40-64 can drink between half and two standard drinks a day — classed as those containing 10g of pure ethanol — before their habit posed a risk.

Meanwhile, those aged over 65 could have up to 3.5 drinks per day without seeing their health deteriorate.

The researchers said one standard drink is equivalent to a small glass of red wine, a can or bottle of beer, or a shot of whisky or other spirits.

Women in the cohort could drink slightly more, at 0.273 drinks, which is around two tablespoons of wine or 100ml of beer.

‘Any level of drinking leads to a higher probability of injuries, while small amounts of alcohol decrease the risk of some conditions prevalent in older ages, such as ischaemic heart disease and diabetes,’ the authors wrote.

Young people were found to be most at risk from alcohol harms.

Six in 10 of those drinking harmful amounts of alcohol were 15 to 39-years-old, with 1billion being men and 300million being women.

Harmful alcohol use was highest among young men in Australasia, western Europe and central Europe.

Overall, the recommended alcohol intake for adults remained low at between zero to 1.87 standard drinks per day, regardless of geography, age or sex.

‘This is because a larger proportion of males compared to females consume alcohol and their average level of consumption is also significantly higher.’

The researchers noted that their findings on alcohol risk was based on data that did not distinguish between those who drank over several days and those who engaged in binge drinking.

And alcohol consumption was self-reported, so may contain inaccuracies, they said.

Lead author Dana Bryazka, a researcher at the university’s Institute for Health Metrics and Evaluation, said even if the lowest level of safe consumption is used in alcohol guidelines, the findings implies that the recommended level of alcohol consumption is still too high for younger populations.’