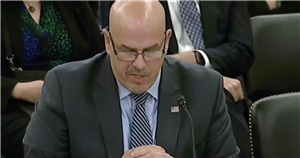 The Electronic Health Record Modernization program initiated by the U.S. Department of Veterans Affairs is among the most complex IT projects in history, with a timeline stretching over a decade and carrying, at present, at least, a $16 billion price tag.

The ambitious project has faced numerous operating challenges that have allegedly placed patients at risk. The program’s expansion has been put on pause until 2023, while these safety risks are sorted out.

With Oracle having completed its $28.3 billion acquisition of Cerner in June, Mike Sicilia, executive vice president of Oracle Industries, testified this past week before the U.S. Senate Committee on Veterans’ Affairs for a hearing examining the status of the EHR modernization.

“While I fully appreciate substantial challenges exist – all of which are legitimate and understandable – the fact is that more is working than is not,” Sicilia said. “Rollouts to date have been largely successful, and much of the functionality is working.”

He added Oracle is committed to shifting its top talent resources to making the combined DoD and VA EHR system a “top priority” for the company, and said the overall goal of providing a single, interoperable EHR for individuals was already in place.

This includes the establishment of a “war room” to conduct a top-to- bottom analysis of the entire EHR system, said Sicilia, which is led by a team of “very senior” Oracle engineers and developers.

When fully deployed across the VA healthcare system, 171 medical centers will go from using 130 different versions of the current VistA EHR to using one single enterprise-wide EHR that is interoperable between the VA, DoD, and Coast Guard.

Oracle’s twin goals are to ensure patient safety first, and to deliver the world’s most secure, modern, and intuitive EHR to the three departments, he said.

“Ultimately that’s what this is all about, making sure that from an Army recruit’s first physical at boot camp to her separation from service and receipt of care at the VA, she will have an EHR that goes with her and allows all of her providers at any facility to know her full medical history,” said Sicilia.

He announced Oracle’s plan to move the Cerner application to Oracle Cloud Infrastructure center within the next six to nine months, which he said would deliver better performance and stability and offer the built-in security benefits including automatic patching.

“Candidly we anticipate this change alone will be the single most important change we make in terms of system reliability,” said Sicilia. “It will also provide a scalable, modern platform for us to deliver the kind of future releases users have come to expect like mobility and predictive analytics.”

Sicilia testified that Oracle also plans improvements – at no cost to the government – to the functionality and design aspects of the EHR, including addressing the “unknown queue” issue which rerouted scheduling tasks for manual review and processing.

“We commit that Oracle will not go-live at a facility unless we are confident the system is fully prepared for the additional workloads and it has been thoroughly tested because patient safety is our highest priority,” Sicilia said. ” To be clear, we are dedicated to providing whatever resources are necessary to deliver the DoD and VA a system that exceeds expectations.”

The first concerns over the system were reported more than a year ago at the first go-live site for the VA’s massive health IT modernization project at Mann-Grandstaff VA Medical Center in Spokane, Washington.

More recently, clinicians at dozens of DoD, Coast Guard and VA sites were unable to update medical records for hours after an EHR outage took down federal Cerner systems.

The hiccup followed a widely publicized outage at the beginning of March, in which VA staff at Spokane, Washington, and Columbus, Ohio, sites relied on downtime procedures for nearly 24 hours.

Nathan Eddy is a healthcare and technology freelancer based in Berlin.
Email the writer: [email protected]
Twitter: @dropdeaded209