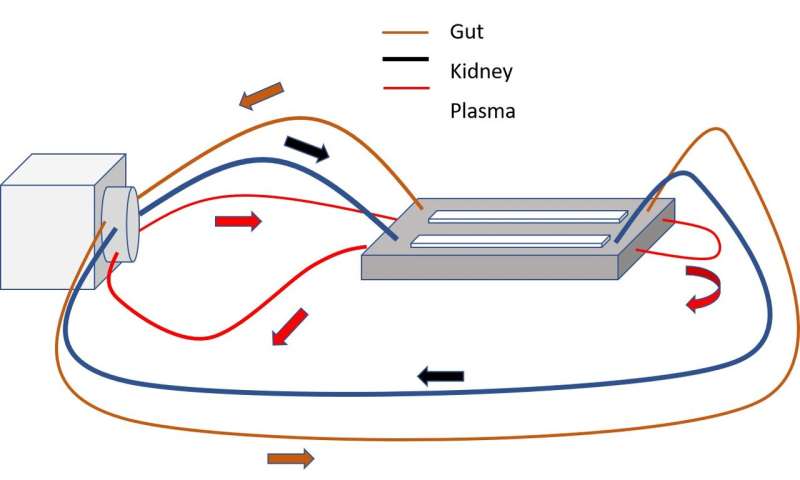 Researchers at Utrecht University have developed a new organ-on-a-chip: a device to mimic and study kidneys and intestines in miniature format. The device is the result of a special collaboration between pharmacology and theoretical physics, which significantly improved the fluid flows in the device. The researchers published their findings 24 July in Frontiers in Bioengineering and Biotechnology.

“In this research, we made a chip that enables us to mimic the kidney and the intestines in miniature and study the effects of substances on these organs,” says Professor of Experimental Pharmacology Roos Masereeuw from Utrecht University. Fluid flows, such as blood, influence the development and functioning of cells in these devices. “We just didn’t know how much flow was needed for proper development and whether this was as close as possible to reality. Based on the calculations of René van Roij’s research group, the chip has been adapted in such a way that we can simulate fluid flows as real as possible.”

The miniature system for gut and kidney consists of a tube in a container through which water flows. Cells are placed on the tube, which ideally grow into a dense, homogeneous layer of specific kidney or intestinal cells, influenced by the pressure of the fluid that mimics blood flow.

“Thanks to our theoretical calculations, we have a much better idea of which channel geometry is optimal, such as the shape of the device, the location of input and output, the location of the tube in the chip,” says physicist René van Roij, professor theory of soft matter at Utrecht University. “Now we also know better at what rate to pump the fluid peristaltically to generate a nice layer of well-developed kidney or intestinal cells in vitro. In the modified device, we observed a better layer formation and improved cell development. This brings pre-clinical in vitro testing of drugs dispositions in an animal-free manner one step closer,” Van Roij says.