After a near drowning, a young man was in a vegetative state. Physicians and social workers believed he should go to a nursing home because of his health needs and poor prognosis. His family, however, insisted on taking him home. 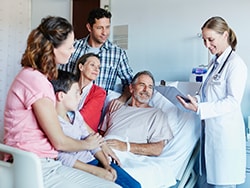 “I felt that the amount of care he would require would totally deplete the family’s meager income/finances and emotionally bankrupt them as well,” recounted an anonymous emergency physician in Medscape’s Ethics Money, Patients, Romance: Physician Ethics 2020. “However, after long and heartfelt discussions with the family and putting myself in their [shoes], I agreed to send him home, with all the help — occupational therapy, physical therapy, home health, etc — that we could muster.”

What happened next shocked the physician.

After being cared for by his family, the patient eventually returned for a follow-up appointment with the physician, who worked at an outpatient clinic. The doctor did not have high hopes but was stunned when she saw the patient, who didn’t arrive in a wheelchair.

“He stood up and walked stiffly into my office,” she wrote. “It was indeed a miracle! I followed him for another year or so and he regained much of his function and mentation. His family was right and all the rest of us were wrong. I always think back on him when I am faced with cases that look ‘hopeless.’ “

The patient clearly had a good support system and the appropriate rehabilitative processes at home, said neurologist Paul Wright, MD, senior vice president and system chair of the Nuvance Health Neuroscience Institute, based in Poughkeepsie, New York. Wright is not familiar with the particular case but said he has seen many cases in which brain-injured patients thrived after returning home to recover.

“We all talk about the broader aspects of rehabilitation, but we overlook that it’s the simple things that sometimes mean more than anything,” he said. “What is familiar is your home environment, your family. That has significant impact on a recovery.”

The pandemic, however, has raised challenges for connection and closeness during treatment and recovery, notes Don Dizon, MD, head of community outreach and engagement at The Cancer Center at Brown University and director of medical oncology at Rhode Island Hospital.

“This is especially the case during surges, for example, when families are not allowed to accompany people to their treatments, wait in waiting areas, or even enter hospitals, particularly if there is more than one person who desires to support them,” Dizon said. “I’ve noticed there’s a lot of anxiety as far as not feeling as attached.”

Doc: I Would Want This Family to Care For Me

Wright recalls a patient who suffered a catastrophic aneurysm rupture in the brain. Physicians initially believed he would die, but the man survived emergency treatment and moved on to a rehabilitation facility. As a result of his injury, the patient was bedbound, had brain damage, and had only limited movement of his limbs, Wright said.

His family — a mother and several adult sisters — pulled him out of the rehabilitation facility early and took him home.

The sisters took turns making sure their brother was bathed, fed, clothed, and ready for occupational and physical therapists to visit the house, Wright recalled. They put a large calendar on the wall and made a schedule of daily activities. Before the injury, the patient had taken good care of his appearance, Wright said, so the sisters put scented lotion on his skin, made sure he was shaven, and combed his hair every day.

“Before the hemorrhage, the man was a very well-respected engineer for firework displays,” Wright said. “The goal was there. The family told him, ‘You’re getting back to that, and there’s no discussion about it.’ ” The family started bringing in computers and having kids come by to help him set up.”

The family moved the man from a hospital bed at home to an electronic wheelchair and spent hours working to improve his joint movement. The patient ultimately started programming again for fireworks displays. He made an amazing recovery, both physically and mentally, Wright said.

“To me, it was the personal touch that made such a difference,” he said. “I said to the family, ‘If I ever get sick, I’m calling you to take care of me.’ “

For Dizon, one close-knit family and their impact has long lingered in his memory. The patient, an older woman, had a gynecologic cancer that did not respond to traditional treatment.

“They saw me for a second opinion,” Dizon said. “Typically, with this aggressive cancer, if there’s no response to chemotherapy in the first go-around, survival is really measured in months. She came to see me with her husband and her daughter, and her son, and they were so devoted to her.”

Dizon recommended the patient try an anti-hormone therapy. He explained to the family that the treatment may only be palliative, he said. The woman was reluctant, but her family encouraged her, and finally they convinced her to try the treatment. At every monthly appointment, all four family members came together, Dizon said. If one person couldn’t make it, he or she would call in and participate in the appointment by phone.

“I felt like I was treating a family,” he said. “Three months later, her first scan came back, and her disease was gone. That was striking. She had gone into remission with a treatment that I was hoping would just give her better quality of life.”

“My rationale for using anti-hormones was to get away from the cancer-killing chemotherapy concept because it did not work and to try a new potential pathway,” he said. “But it was the most incredible response I’ve ever seen. One wonders if it was that shared experience and if having such a devoted family was one of the things that really helped her body fight it. One might wonder what role that kind of intensive support played in the patient’s outcome.”

How Family, Love, and Connection Can Affect Outcomes

“Many studies have been done over the years that show contact improves patients’ overall well-being, decreases anxiety, decreases stress,” Wright said. “And when you have family members, they provide that contact. They give reassurance. It’s extremely important.”

In addition, much medical literature regarding cancer, particularly breast cancer, suggests that cancer patients who have no social support or restricted social support are at an increased risk of poor outcomes, Dizon added.

“What’s interesting, however, is that the existence of a spouse or of children is not a guarantee of that kind of support,” he said. “It doesn’t have to be the family you marry or the kids you raise. In fact, if you look at the sexual and gender minoritized community, we create our families beyond the ones we were born into. Blood doesn’t define family. Relationships define family.”

“Often loved ones can be amazing advocates if the family member has an unmet need or they feel something should be done better or differently,” Thurston said. “Loving family members can help us as the medical team make sure we’re taking care of our patients as humans and as people with their own lives and stories and not just another making another diagnosis.”

Thurston recalls a patient with a terminal illness who had a problem with his colon. The surgery team wanted to operate and resect some of the patient’s colon, he said.

“The family basically said, ‘Why are we doing this? We have an incurable disease. We just want to go home and make him comfortable and not spend any more time in the hospital,’ ” Thurston said. “It was an interesting balance between physicians who felt they should operate and possibly improve the patient’s condition for a while and a family that saw no value in that direction. The family made the medical team realize that taking the patient home was the right option for the patient and the family.”

To maximize the positive effects of family involvement on care and outcomes, Thurston advises that physicians take the time to listen.

“Doctors, nurses, clinicians can sometimes spend so much time talking and so much time throwing our expertise at patient and families that we don’t take the time to be silent and listen,” he said. “When we listen, we’re able to be curious, we’re able to ask what gives their life meaning. When we listen to their goals and expectations, then we’re really able to come up with the best medical plan. And sometimes, the best medical plan is not exactly what we would do by protocol or our traditional experience.”