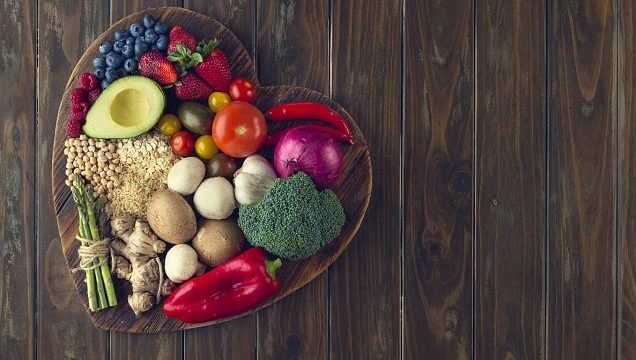 Eating lots of vegetables, fish and olive oil improves good bacteria in the stomach by up to seven per cent compared with a western diet, a study found.

‘If the bacteria are of a certain type and not properly balanced, our health can suffer.

‘Our study showed that the good bacteria, primarily Lactobacillus, most of which are probiotic, were significantly increased in the Mediterranean-diet group.’

Poor gut bacteria has previously been linked to conditions such as depression and pneumonia. 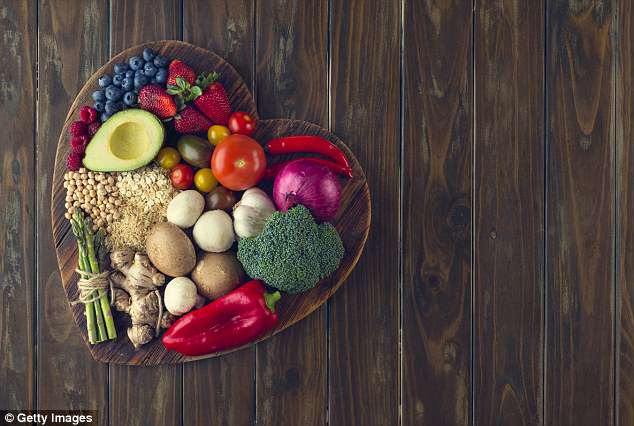 Not just good for the heart: the study found that a Mediterranean-style diet can also increase levels of good bacteria in the gut.

Cutting out salt and eating lots of fruit, vegetables and low-fat dairy, reduces people with high blood pressure’s results by an average of 21 mm Hg, the research adds.

To put that into context, the Food and Drug Administration (FDA), the US’ drug-approving body, will not accept anti-hypertension medications unless they lower blood pressure by at least 3-4 mm Hg.

Most medications typically reduce hypertension readings by between 10 and 15 mm Hg, but come with side effects including fatigue, dizziness and headache.

Study author Dr Lawrence Appel said: ‘What we’re observing from the combined dietary intervention is a reduction in systolic blood pressure as high as, if not greater than, that achieved with prescription drugs.

‘It’s an important message to patients that they can get a lot of mileage out of adhering to a healthy and low-sodium diet.’

Around 32 percent of adults in the US, and one in four in the UK, have high blood pressure, which puts them at risk of heart disease and stroke.

The researchers analyzed 412 people with early-stage hypertension who were not taking high blood pressure medication.

Some of the study’s participants were fed a ‘DASH (Dietary Approaches to Stop Hypertension) diet’, which includes lots of fruit, vegetables and low-fat dairy products, with minimal saturated fat.

All of the participants were fed different sodium levels equaling around 0.5, one or two teaspoons of salt a day over four weeks with five-day breaks in between.

The study, published in the journal Frontiers in Nutrition, used animals to mimic two human diets, as this allowed researchers to carefully monitor and control the nutrients ingested.

According to Dr Yadav, studies in humans rely on self-reporting questionnaires which may be ‘only estimated’.

The study compared a typical western diet, which is made up of lard, cholesterol and refined sugars, with the Mediterranean way of eating.

Both diets contain butter, eggs and sucrose, as well as the same number of calories.

After 30 months, the research team analysed the bacteria in the digestive track of animals.

They found the diversity of gut bacteria in the group which ate the Mediterranean-style diet was much greater.

According to the researchers, this data will be useful for further studies aimed at understanding how the diet affects human health in areas including obesity, type 2 diabetes, cardiovascular disease and psychiatric disorders.

This comes after research released last December suggested Cambridge University scientists have found a way to turbo-charge the health benefits of a Mediterranean diet.

Researchers have created a supplement known as ‘Ateronon Heart’, which combines the heart-health benefits of a key component in tomatoes with milk, which makes the compound easier to absorb.

In a world first, they have been issued with a patent for the all-natural, over-the-counter product, which slows down the build-up of plaque in the arteries, preventing heart disease.

Previous studies show the supplement, which retails at £19.99 for 30 capsules, improves blood flow by 53 per cent.

Nick Sutcliffe, the Cambridge lawyer who steered the patenting process, said: ‘There is increasing interest in natural ingredients.

‘People are looking for cures and if they can find them in plants that is very much easier than developing synthetic drugs to treat disease.’

More than one million women and 1.6 million men are living with heart disease in the UK, which can lead to heart attacks and failure.