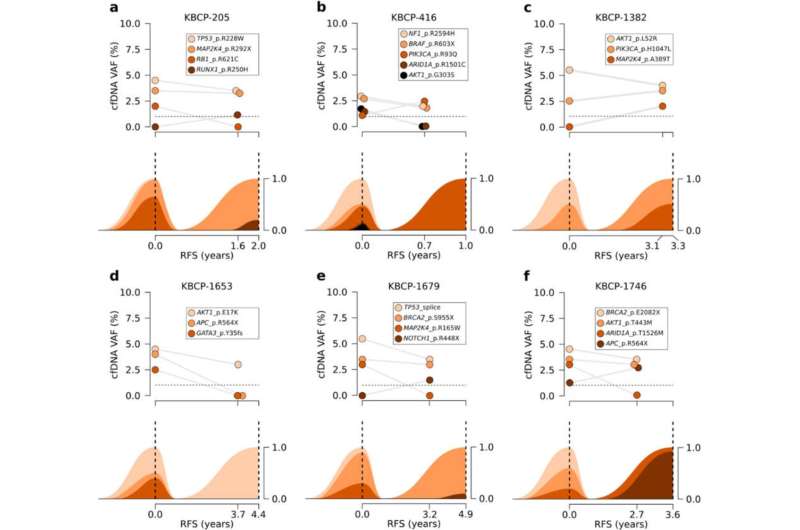 Liquid biopsy performed on serum samples taken from breast cancer patients can provide increasingly accurate information on cancer progression and enable earlier detection of cancer recurrence, a new study from the University of Eastern Finland and Kuopio University Hospital shows. The findings were published in Cancers.

Intratumoral heterogeneity is a major challenge for cancer treatment

It is possible that some cancer cells tolerate treatment well enough to survive, which can lead to recurrent breast cancer later on.

“Time is a key factor in intratumoral heterogeneity. Over time, the spectrum and properties of cancer cells tend to change and develop in a direction that is more therapeutically challenging,” Doctoral Researcher Jouni Kujala from the University of Eastern Finland says.

“In addition, tumor samples are representative at the time of sampling only, and intratumoral heterogeneity cannot really be monitored much after sampling.”

Liquid biopsy that utilizes biomarkers released by cancer cells has been proposed as a possible method for the early detection of recurrent breast cancer, and for the monitoring of cancer progression. A major advantage of liquid biopsy over traditional tumor biopsy is the ease, safety and repeatability of sampling.

The researchers observed mutations characteristic of recurrent breast cancer in cell-free DNA months before the recurrent cancer was detected during a medical examination. With the mutations observed, the researchers were also able to assess changes in intratumoral heterogeneity, and to establish a more accurate understanding of the clinical picture.

“By monitoring the cancer mutations detectable from cell-free DNA, it is possible not only to detect recurrent breast cancer but also to identify mutations that are relevant to treatment planning and thus to support medical professionals’ decision-making,” Professor Arto Mannermaa from the University of Eastern Finland explains.