For many people, enjoying a freshly brewed cup of coffee first thing in the morning is a nonnegotiable way to start the day. But the idea that taking a sip without food could harm your gut — or contribute to other ills like bloating, acne, hair loss, anxiety, thyroid issues or painful periods, as some on social media have claimed — has garnered as much popularity as incredulity.

Researchers have been investigating the benefits and harms of drinking coffee, especially as they relate to the gut, since the 1970s, said Kim Barrett, a professor of physiology and membrane biology at the University of California, Davis School of Medicine, and a member of the governing board of the American Gastroenterological Association. Fortunately, the stomach can withstand all kinds of irritants, including coffee. 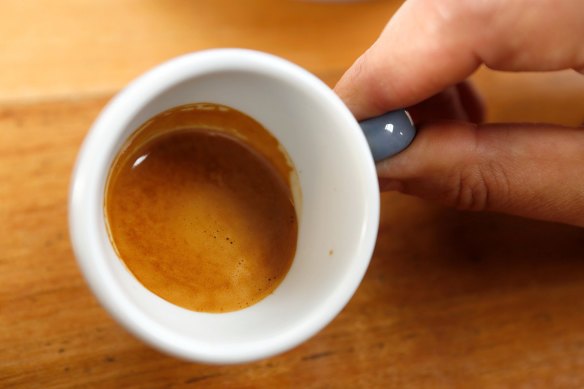 On an empty stomach, black coffee might cause more irritation than coffee with milk.Credit:Eddie Jim

“The stomach has so many ways to protect itself,” Barrett said. For example, it secretes a thick mucus layer that creates a powerful shield between the stomach lining and whatever you ingest. That shield also protects the stomach from its own natural acidic environment needed to break down food, she explained.

You’d have to consume a very harsh substance “for the defences of the stomach to be breached because it’s constantly in a very adverse and damaging environment,” she said. “That’s just how the stomach does its job.”

How does coffee affect the gut?

Irritants like alcohol, cigarette smoke and non-steroidal anti-inflammatory drugs — such as ibuprofen or naproxen — are well known to alter our stomach’s natural defence mechanisms and injure its lining, said Dr Byron Cryer, chief of internal medicine at Baylor University Medical Centre in Dallas.

His research lab specialises in understanding how different medications and other chemicals can harm the stomach and small intestine. While certain irritants can make the stomach more vulnerable to acid and ulcer formation, multiple large studies have found that this is not the case with coffee. A 2013 study of more than 8,000 people living in Japan, for example, found no significant association between coffee consumption and ulcer formation in the stomach or intestine — even among those who drank three or more cups per day.

“Coffee, even in a concentrated form, is not likely to cause objective injury to the stomach,” Cryer said. “And much less at the typical doses in usual beverages.”

Nonetheless, coffee does have an effect on the gut — it can speed up the colon and induce a bowel movement, and coffee increases acid production in the stomach.

Outside of the gut, the caffeine from coffee is well known to increase heart rate and blood pressure. And if you drink it too close to bedtime, it can disrupt your sleep. But these changes are temporary, Cryer said.

Will increased stomach acid cause any issues?

Drinking coffee on an empty stomach is unlikely to cause any damage to your stomach, but it could theoretically provoke heartburn, Barrett said.

We know that coffee sets off stomach acid production, but if you have food in your stomach, or if you drink your coffee with milk, that will aid in creating a buffer that helps to neutralise that acid. So drinking coffee, especially if it’s black, without a meal can reduce the stomach’s pH more than it would if you drank it with milk or with a meal, Barrett said.

Although a slightly lower pH is no problem for your stomach lining, it could pose an issue for the lining of your oesophagus because it is far more vulnerable to damage from acid. Furthermore, a few studies have shown that coffee can relax and open the sphincter that connects the oesophagus to the stomach, which hypothetically could allow acid from the stomach to more easily splash upward into the oesophagus and cause unpleasant heartburn symptoms.

So, what should I do?

Practically speaking, as a gastroenterologist, I usually tell my patients to take note of their symptoms. If they consistently notice a burning pain in their chest or a sour taste in their mouth after drinking coffee, they may want to cut down — or consider an antacid. Adding a splash of milk or cream or a small bite of food with your morning cup can also help. But if you aren’t noticing any symptoms, you’re probably someone who doesn’t experience significant reflux after coffee and can keep drinking it in peace.

Cryer regularly enjoys his coffee as a latte or cappuccino — the steamed milk cuts down the bitterness, he said. And, in general, he added, coffee drinking has many health benefits, including links to longevity, a lower risk of cardiovascular disease and protection against many cancers, including liver, prostate, breast and colorectal cancer.

“There’s far more evidence for coffee’s benefits than harms,” Cryer said — which is something worth keeping in mind, he added, while you scroll through social media stories that profess the brew’s detriments.

Dr Trisha Pasricha is a gastroenterologist at Massachusetts General Hospital

This article originally appeared in The New York Times.