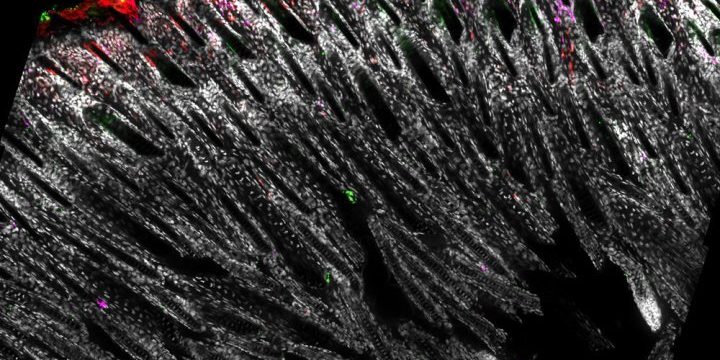 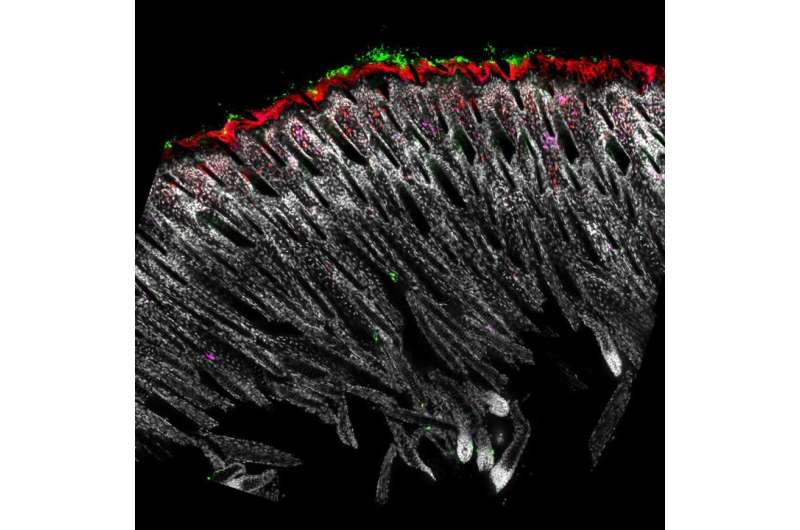 A new study by UC San Francisco researchers reveals how gut inflammation can disrupt not only the digestive system, but also the skin. It’s a tale in which the main players are specialized immune cells and the bacterial communities—called microbiomes—that dwell within the gut and skin.

Scientists have become increasingly aware that disturbances to the gut microbiome can affect the rest of the body. Such changes have been associated with increased risk for diseases such as asthma, rheumatoid arthritis, multiple sclerosis.

In a study published May 31, 2022, in Cell Reports, the research team investigated how colitis, or chronic inflammation of the large intestine, can cause debilitating skin conditions that look like infections but don’t actually contain skin pathogens.

“What we learned is that factors involved with gut inflammation are actually causing the skin to react differently to the microbes it’s already become accustomed to,” said dermatologist Tiffany Scharschmidt, MD, senior author on the study. “The composition of bacteria on the skin didn’t change. Instead, what changed was the skin’s immune response to them.”

A multitude of microbes

Normally, invading pathogenic bacteria are attacked and cast out by immune cells, but well-behaved microbial members of the body’s microbiomes—called “commensals”—are tolerated by the immune system. This tolerance is established very early during infancy.

Scharschmidt and her team set out to better understand just how disruption of the immune-microbiome environment in the gut can throw off microbiome tolerance in another distant organ—the skin. This phenomenon occurs in a range of conditions, including colitis, that fall under the umbrella of inflammatory bowel disease (IBD).

The research, spearheaded by then-graduate-student Geil Merana, Ph.D., focused specifically on inducing colitis in adult mice and observing how the immune system and the microbiomes in the gut and skin responded. The team found that this allowed neutrophils, a type of inflammatory immune cell, to infiltrate the skin. In mice, this invasion of neutrophils, which also has been observed in humans with IBD-associated skin disorders, required the activity of a molecule called IL-1, a protein that plays a role in regulating immune response.

Turning the tables against tolerance

A second striking discovery was that colitis seemed to undo early-life tolerance to specific skin commensal bacteria, causing the immune system to launch inflammatory reactions directed against microbes with which it previously was at peace.

The body’s ability to tolerate a species of bacteria is maintained by balancing the work of two types of immune cells that have opposing functions. T regulatory cells, or Tregs, promote tolerance, while T effector cells defend against molecules or microbes that don’t belong in the body. Tolerance arises when Tregs hold T effector cells in check.

The team looked at T cells that target the common skin bacterium Staphylococcus epidermidis, which is normally harmless. They discovered that colitis led to a lower ratio of the Tregs to their counterpart T effector cells. This Treg deficit, they concluded, is what drove the resulting skin inflammation.

The researchers then induced colitis in a group of mice whose T cells were unresponsive to IL-1. In contrast to the response of the normal mice, the genetically altered mice did not experience an accumulation of neutrophils in skin. The ratio of the two types of T cells was unaffected, and no inflammation occurred.

These results demonstrate that IL-1 plays a key role in tipping the balance away from tolerance and towards an inflammatory response, according to Scharschmidt.