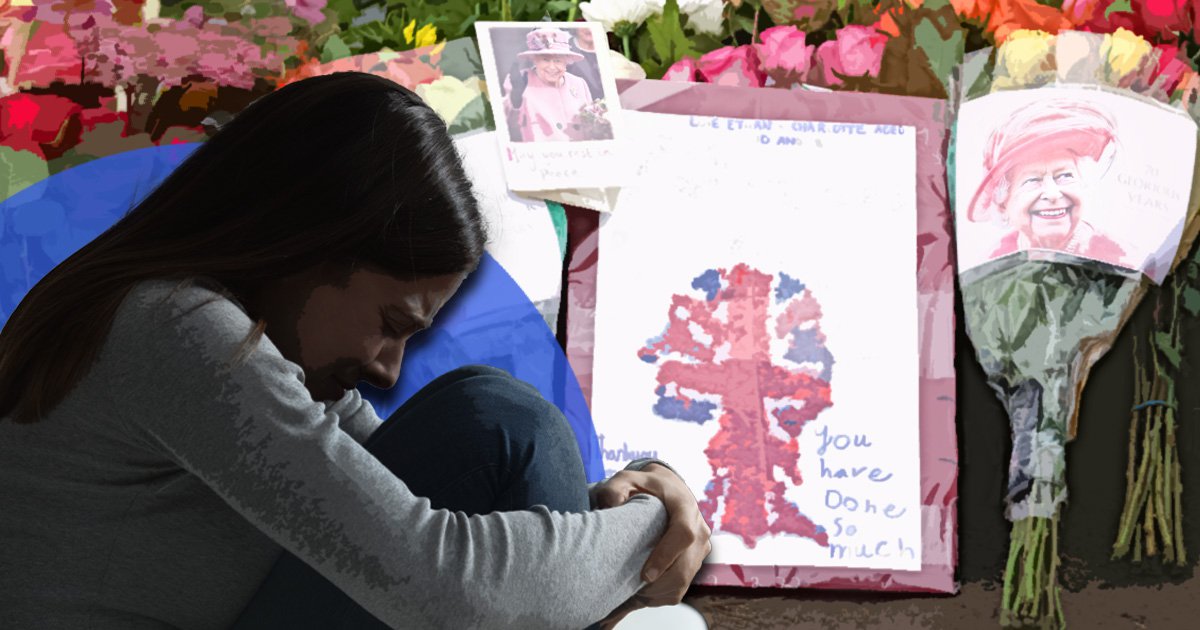 The nation has entered a period of official mourning following the death of Queen Elizabeth II.

The period begins today and, according to the wishes of the newly appointed King Charles, will continue for seven days after Queen Elizabeth’s funeral.

The national mourning will be marked by rolling media coverage, cancelled events and public displays of grief.

This public mourning is reminding some people of the loss of their own loved ones, as the discussions trigger particular memories, feelings, or unfulfilled wishes.

‘Many people walk around with unresolved grief, where feelings have been stuffed away after a loss, and then time has passed and it’s not been dealt with,’ explains Maria Bailey, Founder of GriefSpecialists.

‘When a public figure dies, such as The Queen, those feelings can resurface again,’

As well as the general reminder of loss, people can be triggered by specifics of her death.

Her Majesty Queen Elizabeth II has died after 70 years on the throne, with her death announced by Buckingham Palace on September 8, 2022.

She died at the age of 96 at her home in Balmoral, with her son, the now King Charles, and daughter Princess Anne by her side.

‘Something as simple as her age, the date, or because she was our constant or a mother/grandmother figure, can reignite feelings,’ Maria adds. ‘We might feel empathy towards members of the Royal Family, such as Prince Harry who seemingly arrived too late to say goodbye.’

How could the Queen’s death be triggering for grieving people?

‘It’s possible that the Queen’s death will act as a trigger for people who are going through their own process of grieving,’ argues Dr Simon Duff, a bereavement psychologist (AFBPsS) for bereavement support app Untangle.

Untangle member Kay was reminded of ‘painful memories of her sister’s passing’ as she learnt of the Queen’s death.

‘I cried a few tears earlier when it was first announced, we had the news on and waiting until it was announced she passed, this day and her reign are a huge moment in history,’ she tells us.

‘I mainly felt sad I couldn’t tell my sister, she would have been waiting and watching like me.’

To view this video please enable JavaScript, and consider upgrading to a webbrowser thatsupports HTML5video

Dr Simon says: ‘Quite often, radio, tv and media can be a source of distraction for people who are going through the grieving process.

‘The difficulty now is that those sources of distraction are no longer available because they have all this information about death.’

This is certainly impacting ​​Untangle member Sarah-Jane, who has deleted her social apps as she says ‘you can’t get away from it’.

She adds: ‘It’s hard to know how I’m going to get through this 10-day period and beyond.

‘Even my regular radio station XFM are playing sad songs and talking about it. People don’t consider what this is like for people grieving.’

If the constant news cycle gets too much, the experts all agree that it is okay to switch off and spend time with family and friends instead.

The death of a public figure can lead to difficult comparisons

For grieving folk, a bunch of negative feelings could spring from the news of the death of someone they didn’t have any direct contact with, Dr Simon says.

He explains:  ‘The fact that some members of the royal family could travel to see the Queen before she died and there’s a whole plan for managing her death, could cause anger and resentment.’

Untangle member Rjrowe is annoyed at ‘being subjected to such heavy public mourning’ as she grieves her mother.

She says: ‘It should be personal but it’s inescapable.

‘I mainly feel angry that the Queen (not at the queen) reigned much longer than my Mum even lived.

‘Queen Elizabeth II was the only monarch my Mum ever knew. She will miss the momentous occasion of the Coronation as she did the Jubilee. She would have liked to see that.

‘The world is ever-changing and my Mum remains dead. It makes the distance between us seem further, like she belonged to a different world.’

The magnitude of this public reaction can also sting people who felt alone in their grief for a loved one.

An anonymous member of Untangle says: ‘It’s really weird to me to see people laying flowers and all of that because… I don’t know, she was a head of state, not their grandmother.

‘And it kind of angers me because everyone in the world knows about it and is talking about her, articles on her life are being circulated, pictures.

‘It’s a historical event, while my loved friend’s death was minuscule in comparison and it feels unfair.’

If you’re questioning your response to the Queen’s death, remember there is not one correct way to grieve.

‘The process of grieving is unique to each person,’ reassures Untangle Bereavement Psychologist Dr Elizabeth Paddock.

However you process it, the impact of losing a loved one can be a devastating, life-changing experience.

‘It can leave you feeling numb, confused and lost, impacting every aspect of your life and the lives of people around you’ Maria says.

While some might find the grief of losing someone they love at the same time as losing the Queen totally overwhelming, Maria adds that others may find it a comfort that everyone else is mourning with them.

She found this to be the case when her grandad died the day before Princess Diana’s funeral.

She says: ‘I spent the next day being able to cry and release my feelings of sadness with a feeling that I wasn’t grieving on my own. I even ordered a big spray of white lilies for his coffin, the same as hers.’

Still, not everyone will find comfort in this. Anyone who has been bereaved this week, or perhaps has a loved one’s funeral, may ‘feel their grief is being lost, or it’s not as significant,’ Maria says.

In all of its difficulties, grief is a natural response to loss, explains Dr Lucy Poxon, lecturer in Psychology at the University of East London.

Our reaction to grief can range from a ‘complete absence of emotion’ to an ‘uncontrollable outpouring of emotion’.

Some signs of grief to look out for:

Dr Lucy adds: ‘Our brain interprets loss of a loved one in the same way that it does for emotional trauma and our grief response therefore acts as a protective adaptation for survival.’

Meanwhile, we’ve all heard of the five stages of grief: disbelief, yearning, anger, depression and acceptance. But that may not actually reflect the way we feel, as grief is not linear.

What is certain is that grief can affect us physically, behaviourally, emotionally and cognitively.

‘It can manifest in the form of exhaustion, headaches, withdrawal, avoidance, shock, numbness, loss of concentration, impaired judgement, apathy. It is very likely that grief will disturb our sleep, appetite and concentration and this can leave us less able to take care of our basic needs,’ Dr Lucy adds.

We asked the experts for advice on how to cope with such overwhelming feelings.

What can you do to cope with your grief?

It can also be difficult to know whether the sadness is due to personal grief, sadness at the loss of a public figure, or both.

There’s no need to try and compartmentalise the grief, though.

‘It’s impossible to separate grief into sections and say: “these tears are for my loved one, and these are for the public figure”,’  says Jane Murray, Marie Curie bereavement services manager.

So, Jane says, it can be helpful to allow emotions to flow and be open with your grief in your own way.

Talking or writing about how you are feeling or visiting a special place full of memories can help you process the pain.

Maria also suggests taking some time outside to listen to the world around you.

‘This will help you focus on what’s going on right now, without looking forwards or backwards,’ she adds.

It may help to turn to science to make sense of things.

‘Research has found that healthy grieving involves oscillating between two distinct ways of coping; loss-oriented coping, where we are sitting with the intensity of the pain of loss to restoration-oriented coping where we tend to distract, engage in tasks and avoid that intensity,’ Dr Lucy says.

In plain English: ‘Giving ourselves permission to avoid the pain or conversely to immerse ourselves in those treasured memories can be really helpful during a painful and difficult time but this should be balanced with alternative ways of coping.’

Following all of these tips doesn’t mean there won’t be days where you struggle.

On these days, Maria says it is important not to give yourself a hard time.

She adds: ‘If you have offers of help, this is the time to take it. You’re not failing at anything by asking. Ask for a cooked meal, or some shopping to be done, or ask for your children to be collected from school. You don’t need to do it all.’

Make sure you don’t suffer in silence. You don’t need to put a brave face on it.

‘The best thing to do is acknowledge how you’re feeling by telling someone. If you’re worried about being judged, or the feelings are all consuming, it might be time to look for professional help,’ Maria concludes.

Dr Simon recommends considering what kind of help is going to work best for you.

He says: ‘My own view is that group therapy is very powerful as not only do you have the benefit of a professional, who has knowledge about the psychology of the grieving process, but you get support from other people going through the same process.

‘Traditional things that can be helpful are counselling or therapy, but sometimes there are long wait times.

‘There are alternatives such as organisations like Untangle; they have an online community where people can get support from other people experiencing the same thing. They can also access therapy and group therapy, with no wait times.’