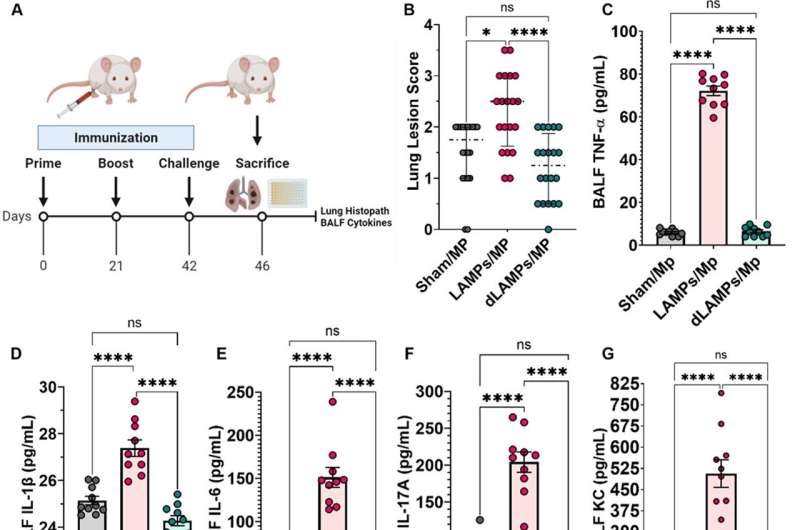 Researchers in the College of Agriculture, Health and Natural Resources are working to unlock a decades-long mystery that has hampered development of a walking pneumonia vaccine.

They share their findings in two recent publications in the journal npj Vaccines.

Mp is a common pathogen that causes walking pneumonia. While this respiratory infection is not typically severe, it is a common co-pathogen with illnesses that spread in the same way, like the flu or COVID-19, which can cause more severe illness, especially in older or immunocompromised adults.

In the 1960s, scientists began working to develop an Mp vaccine. They killed the bacteria and injected it into human subjects, thinking it would provide protection from actual infection. But that’s not what happened.

For two-thirds of the vaccinated population, the vaccine worked. But in the other third, their symptoms were worse than the unvaccinated group. This phenomenon is known as vaccine-enhanced disease.

With the field of study stalled, Szczepanek and his collaborators had what they hoped would be a major breakthrough in 2012. They tested a new vaccine formulation in mice with a bacterial strain that couldn’t attach to host cells. Despite this promising new approach, the mice still developed vaccine-enhanced disease.

Szczepanek decided to shift focus to understanding why this was happening and unravel the mystery of Mp.

Mycoplasmas, the larger category Mp belongs to, are unusual bacteria. Unlike other bacteria, they don’t have cell walls. Instead, they have a highly concentrated arrangement of lipoproteins. This allows them to embed into the host cells’ membranes, which are also made of lipids.

There are receptors on our immune cells called TLR2s (toll-like receptor 2) that bind to bacterial lipoproteins. This allows the immune cell to identify the presence of a foreign bacteria and launch the appropriate immune response.

Now, two years after that initial publication, Szczepanek’s group has made new discoveries about what causes vaccine-enhanced disease.

The key is in the adaptive immune system, which includes T cells and B cells that remember how to fight a previously encountered infection, either through vaccination or infection.

“You don’t want to just turn on your immune system and crank it up to max potential because there’s going to be all kinds of damage to your cells,” Szczepanek says. “You want to have a finely tailored immune response to the threat at hand. There needs to be some level of IL-17 around to activate these immune responses. But with vaccination, with those lipid moieties present, the IL-17 level was screaming high.”

This allowed for the expression of other cytokines that recruited innate immune cells called neutrophils. These “hard-core” immune cells throw their own DNA at pathogens to trap and kill them with the DNA’s negative charge. The issue is that this response can also harm our own cells if left unregulated. Thus, the prevalence of neutrophils causes vaccine-enhanced disease.

Since mycoplasmas can’t make their own genetic material, they seem to be driving this response on purpose—creating its own genetic nutrient source.

Another recent publication highlights how B cells, which produce antibodies, might play a role in vaccine-enhanced disease.

The researchers found that antibodies did not seem to do much to protect mice. This was highly unusual, since normally antibodies are the immune system’s main tactic for fighting an infection it has encountered before.

Given this, the researchers decided to deplete the mice of B cells. They then saw that the vaccine enhanced disease was even worse without B cells. This indicated the B cells play some role besides antibody creation when it comes to Mp infection.

“What appears to be happening is that the B cells are holding this vaccine-enhanced disease in check,” Szczepanek says. “It doesn’t prevent it entirely. But when you don’t have those B cells, it’s way worse.”

Discovering how exactly the B cells help mitigate vaccine-enhanced disease is a future avenue for research that could help the development of an effective vaccine or treatment, since Mp, like all bacteria, are becoming increasingly resistant to antibiotics.