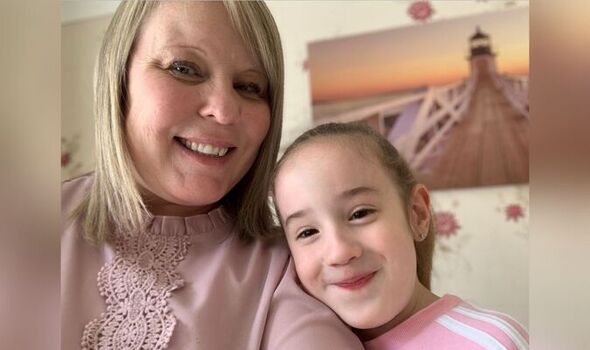 A five-year-old girl saved her mother’s life after she collapsed while they were eating lunch together.

Breyer Warke jumped into action when Linda became unresponsive at their home in Birkenhead, Merseyside.

At first, Breyer thought her mum was pretending, but she soon realised it was not a joke and began gently slapping her mum’s face to try and wake her up, but she remained unresponsive.

Knowing her mum was diabetic, Breyer calmly called her grandad to tell him what had happened, who immediately called the emergency services to their Liverpool home.

Linda’s blood sugar was dangerously low, and she was minutes away from a hypoglycemic coma.

She told The Echo: “My husband, Breyer’s father passed away when Breyer was 18 months old.

“A year later my mum passed away and it took me a long time to get back on my feet.

“Being a single mum with diabetes and living alone with Breyer, I wanted to make sure that my daughter was prepared and knew what to do if I became poorly.”

Linda taught Breyer, now aged six, how to call 999, to memorise their address and how to call her grandad if she was to ever collapse or become unresponsive.

The ambulance crew arrived and treated Linda at home with a glucose drip which reversed her blood sugar.

She did not need to go to hospital after the ordeal in May this year, thanks to Breyer’s brave actions.

Linda said: “I was blown away by my daughter’s bravery, she was only five at the time and remembered what to do in what is a stressful situation. I am so proud of her.”

Following children like Breyer saving the lives of their loved ones, North West Ambulance Service is asking parents, guardians and relatives to make sure their children know to call 999 if they are with somebody who becomes seriously ill or injured.

The appeal is part of a wider initiative from the trust called the Ambulance Academy, which helps guide children, young people and teachers on how to use its services.

Breyer went on to win a Character of the Year Award at the World Class Schools Quality Mark Awards in London for her actions that day.

Ged Blezard, Director of Operations, said: “Teaching our children and future generations the right reason to call 999 could save your life – we have had callers as young as four call us because their parent is unconscious.

“Breyer acted calmly in what must have been a very frightening situation.

“By calling her grandad immediately, who then called 999, she was able to make sure we were able to get help to her mum as quickly as possible.

“We are asking parents and guardians to make sure they take five minutes to sit down with their children and explain when to call 999, especially if the adult is not awake.

“It is important that children know their address and postcode so that if they need to call 999 we can get an ambulance to them as quickly as possible.”