Systemic lupus erythematosus (SLE) is an autoimmune disease that affects all the organ systems of the body. This chronic disease includes periods of illness, called flare ups, and periods of remission, when symptoms are few. There is so far no cure for this disease; treatments involve preventing flare ups and reducing their severity and duration. One of the most severe forms of SLE is neuropsychiatric systemic lupus erythromatosus (NPSLE), which affects the central nervous system—the brain and spinal cord.

A team of researchers, led by Professor Masaaki Murakami at the Institute for Genetic Medicine, Hokkaido University, have identified a stress-induced molecular mechanism that affects NPSLE, revealing a potential target for the treatment of the disease. Their findings were published in the journal Annals of the Rheumatic Diseases.

The research team focused on a specific type of NPSLE called Neuropsychiatric lupus with diffuse neuropsychological manifestations (dNPSLE). There are believed to be many causes for dNPSLE, but its pathogenesis remains poorly understood. The researchers were most interested in the effects of stress, as chronic stress is known to be involved in the development of many autoimmune diseases.

In order to identify stress-induced molecular mechanisms that might affect dNPSLE, they conducted experiments on mice models that exhibit SLE-like symptoms. After subjecting a set of these mice to sleep deprivation stress, they were able to identify that the medial prefrontal cortex (mPFC) of the brain was abnormally activated. 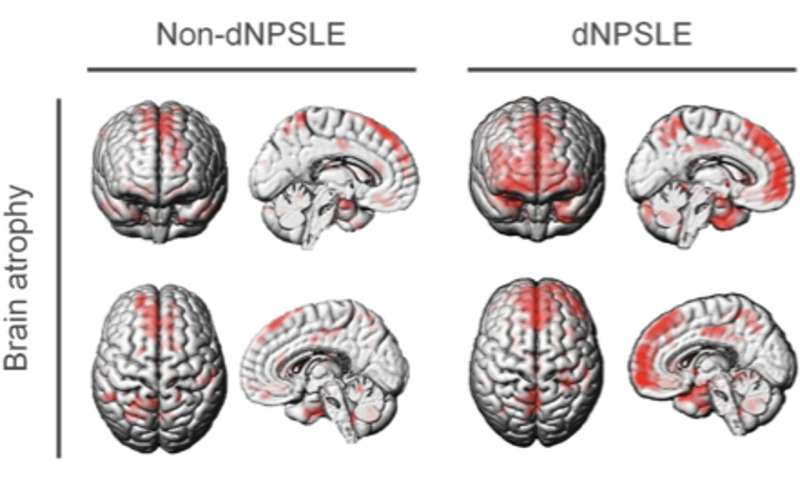 In the mPFC, the expression of at least 509 genes was significantly affected by sleep deprivation. The team specifically noted the upregulation of a microglial proinflammatory gene that is required for two interleukins, IL12 and IL23. Further, they showed that upregulation of these two interleukins caused activation of the microglial cells of the mPFC. Blocking IL12 and IL23 pathways in these sleep-deprived mice models inhibited the stress-induced neuropsychiatric symptoms.

Most importantly, they showed that levels of IL12 and IL23 in the cerebrospinal fluid of human patients with dNPSLE were higher than that of healthy individuals, to such an extent that it can be used as a diagnostic marker. They also showed that the mPFC in dNPSLE patients is atrophied. Together, these indicate that the findings from the mice models may be applicable to humans.