More and more processed products are coming on to supermarket shelves developed specifically for children. Most are designed and marketed to appeal to parents, particularly mothers, and many – despite appearing to be healthy – are in fact not.

Many countries have consumer protections to ensure that commercial marketing is not misleading or deceptive. In Australia, the process largely relies on complaints being made to the body overseeing this legislation, the Australian Competition and Consumer Commission (ACCC).

The Obesity Policy Coalition (OPC) has tested the application of these laws in relation to Coca Cola’s Mythbusting marketing campaign, which was found in 2009 to be potentially misleading and deceptive for the public.

In 2015 the OPC examined products developed for toddlers, which are frequently marketed using images and words that imply that the products are healthy and/or nutritious, often suggesting they are packed with fruit, when they are not. Many of the products looked at were high in free sugars derived from fruit, regarded as free sugars by the World Health Organization, to be eaten only in small amounts. The OPC brought these products to the attention of the ACCC which decided to take action in Australia’s Federal Court against one of the product ranges produced by Heinz, called Heinz Little Kids fruit and veg SHREDZ. There were three products in this category, “berries, apples and veg”; “peach, apple and veg”; “strawberry and apple with chia seeds”.

The packaging of the SHREDZ product contained a stylised picture of a tree on the front, with an image of a boy climbing a ladder up the tree, with coloured photographs of an apple, strawberry, raspberry, blackcurrant, with some sweetcorn kernels and slices of pumpkin.

The front of the packaging carried the words ‘99% fruit and veg’ and ‘No Preservatives and No artificial colours of flavours’. The front of the box also gave prominence to the age the product was aimed at: 1-3 years.

On the back, in smaller font, were the words:

“Made with 99% fruit and vegetable juice and purees, these tasty treats are a fun and convenient snack for toddlers on the go. Our range of snacks and meals encourages your toddler to independently discover the delicious taste of nutritious food. With our dedicated nutritionists who are also mums, we aim to inspire a love of nutritious food that lasts a life time.”

In fact, the SHREDZ products did not contain real fruit and vegetables, but were made with fruit juice pastes and concentrates which are regarded as free sugars by the World Health Organization. The SHREDZ products contained between 62% and 66% sugar. 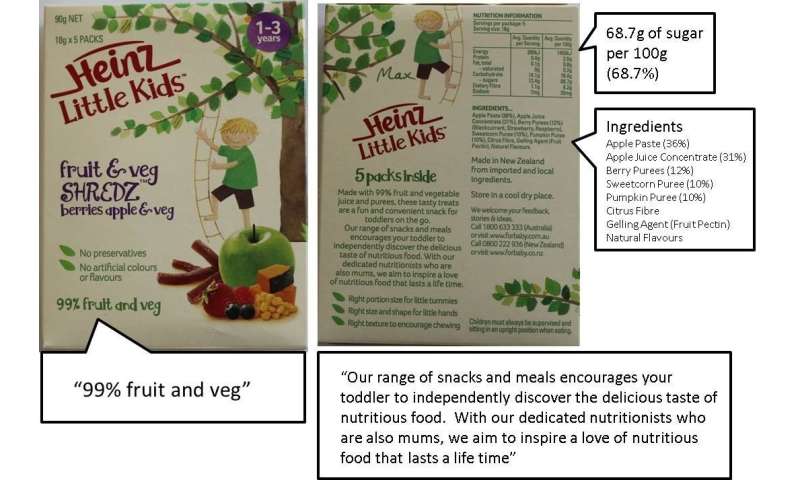 The Australian Competition and Consumer Commission alleged that in its packaging of the SHREDZ products, Heinz made a number of representations that the product:

The Court held that the SHREDZ packaging did convey the second representation that the product was a nutritious food and beneficial to the health of children aged 1-3 years. The judge said that “[e]ven a cursory examination of the packaging indicates that Heinz was promoting the Berries Product as being healthy and nutritious and that ordinary reasonable consumers would have understood that that was so. This is evident from the imagery and colours used as well as from the wording on the packaging” (as described above). According to the judge, the ingredient list and nutrition information panel (which lists that SHREDZ comprised 60% sugar) would not detract from this overall impression, as they were on the back of the box, in smaller print, and could be regarded as “fine print.”

The Court also held that the representation that the SHREDZ product was beneficial to the health of children aged 1-3 years was false and misleading. In reaching this conclusion, the judge discussed the WHO Guideline on sugar consumption which recommends that intake of free sugars (including fruit juice concentrates and pastes) be reduced to less than 10% of total energy intake, (or ideally, to less than 5% of total energy intake), and concluded that the SHREDZ products contained high levels of free sugars well beyond the guideline which are not beneficial to the health of toddlers. Further, the judge was swayed by the argument that the high levels of sugar and the stickiness of the products lead to dental cavities in children.

It is encouraging that the court is prepared to look at WHO Guidelines as well as expert evidence from nutritionists around rising obesity rates in children and the contribution of sugar.

This case should send a powerful message to food manufacturers seeking to exploit parents trying to make healthy food choices for their children, by surrounding unhealthy products with a health halo. Such packaging and health claims are misleading and parents need transparent information on the health of the products they are buying, including clear labelling.

What you can do