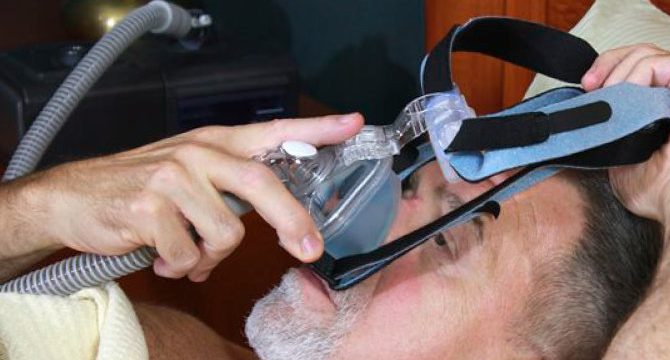 People with sleep apnea, especially those over 60, could decrease their risk of heart failure by using CPAP masks at night to help with breathing, according to new research.

The study, published Friday in the Journal of the American Heart Association, explored the connection between heart failure and sleep apnea, a condition that goes beyond plain snoring. It’s when a person pauses in breathing five to 30 times or more per hour while sleeping.

Previous studies have tied sleep apnea to heart attacks and strokes, but researchers of the new study focused on the possible link between sleep apnea and heart failure, when the heart isn’t pumping as well as it should be, causing the body to receive less oxygen.

The study investigated the impact of continuous positive airway pressure, or CPAP therapy. That involves wearing a mask while sleeping to keep a flow of air in breathing passages to prevent them from closing.

Using data from the Danish national health system, researchers looked at 4.9 million adults over 13 years, including 40,485 people with sleep apnea. The study found patients not treated with CPAP had a slightly higher risk of heart failure, no matter their age. Those over 60 who didn’t use CPAP had a 38 percent higher risk of heart failure compared to those who used CPAP.

“It is indisputable in a study with this many patients that sleep apnea patients as a group do in fact develop more heart failure than the general public, although the observational study design makes it hard to determine a cause-and-effect relationship,” said the study’s lead author, Dr. Anders Holt.

“This should encourage doctors caring for sleep apnea patients to pay extra attention to monitoring and treating other cardiovascular risk factors, as well as the sleep apnea,” said Holt, a researcher with the Department of Cardiology at Copenhagen University in Denmark.

Dr. Donna Arnett, dean and professor of epidemiology at the College of Public Health at the University of Kentucky, said the study “shows that the use of CPAP can be protective against incidence of heart failure.”

Arnett, who was not part of the study, said “we need to educate physicians about the importance of sleep apnea, which is an incredibly under-recognized disorder, and we need to encourage patients to be screened.”

The research underscores the importance of helping patients learn to adjust to sleeping with CPAP masks.

“CPAP can be an uncomfortable treatment,” Arnett said. “Sleeping with a mask over your face can cause nasal dryness and facial irritation. But people do adapt to it. They do get used to it. It’s important for patients to understand that, and to work with their healthcare provider to find the right mask and device that works best for them.”

Holt, who said the current study was limited by a lack of information on cardiovascular risk factors, such as smoking status and body mass index, said he’d like to see a randomized clinical trial on the topic in the future.

Still, he said the study bolstered confidence in CPAP’s effectiveness – especially in light of a 2015 sleep apnea paper in the New England Journal of Medicine that found higher risks of death for certain heart failure patients who used adaptive servo-ventilation, called ASV. It’s a machine similar to a CPAP but it treats central sleep apnea, a less common condition in which the brain doesn’t send regular signals to the diaphragm to contract and expand.