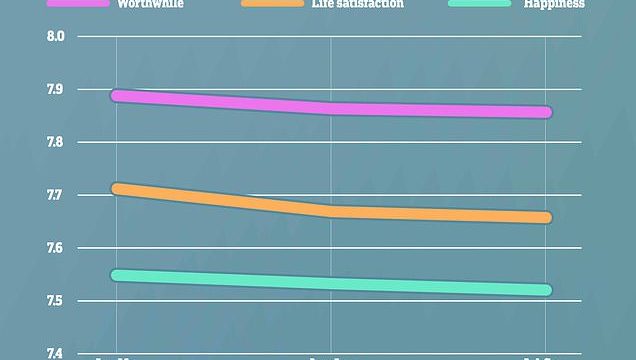 British life satisfaction plummeted over the year 2019, as experts suggest people are fearful of spending too much money.

The Office for National Statistics (ONS) deemed dwindling life satisfaction from January to September as ‘significant’.

Happiness levels have also seen a dip – in the months July to September, a time full of sunshine and holidays, Britons were considerably less content than they were in the summer 2018.

Even though people have more money, and society is facing less unemployment, concerns about the economy appear to be rife.

Adults in the UK are worried about their job security, possibly as the result of high-profile companies packing up, such as Thomas Cook in July. 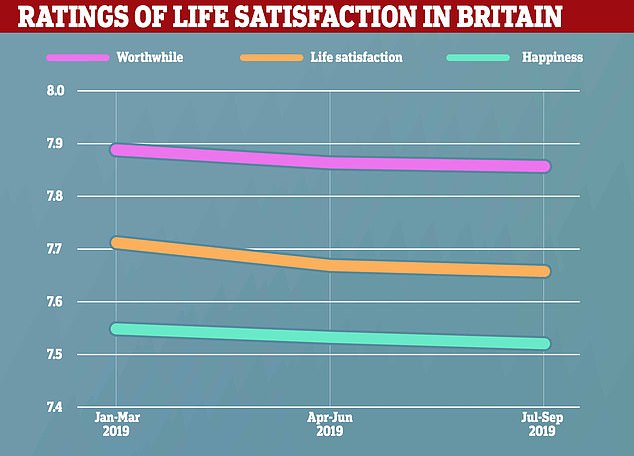 Britain’s happiness, life satisfaction and overall feeling that life is worthwhile plummeted in the year 2019 (pictured, the months January to September, a score out of 10)

The figures come from the Government’s annual population survey, which captures data from 320,000 people across the nation.

Life satisfaction and ‘feeling that things done in life are worthwhile’ fell in the months January to September.

Similarly, ‘feeling that things done in life are worthwhile’ dropped from 7.89 to 7.86.

For the first time since data collection started in 2011, both measures were significantly lower in the summer of 2019 compared with previous summer.

Life satisfaction decreased by 0.7 per cent, while feelings that life were worthwhile reduced by 0.5 per cent.

MONEY CAN BUY HAPPINESS – BUT TOO MUCH MAKES YOU MISERABLE

The researchers suggested that this income sweet spot is probably the middle-ground between having enough money to meet basic needs and having so much that it takes attention away from other factors that contribute to happiness, such as relationships.

According to previous research, money can, on one hand, contribute to greater life satisfaction by saving time, but people may be hesitant to spend their money for fear of appearing lazy, they said.

‘Money is only a part of what really makes us happy, and we’re learning more about the limits of money, lead study author Andrew Jebb said.

They may seem like small percentages, but the ONS said: ‘It is the first significant change since early 2015 in what was a stable picture of life satisfaction in the UK.’

Happiness levels consistently lowered from January to September, from 7.55 to 7.52.

Anxiety remain heightened throughout the year – around 20 per cent of people report high levels.

The previous year saw its fair share of troublesome news – such as the looming Brexit deadline in October.

However, any consequences on our levels of happiness from Britain’s bustling politics late last year, including the general election in December, have not been published yet.

The ONS first and foremost suggest worries about job security and the economy are causing a rippling effect on wellbeing.

Concerns about future employment prospects are the highest since March 2013, even though unemployment rates are considerably better.

And expectations about the general economy has steadily declined since 2014, and are the worst on record since 2011.

This is despite people having more money per household, with disposable money increasing by around 0.3 per cent per person.

A number of large firms – more than average – stopped trading in 2019, which may have given people a negative outlook on the economy as a whole.

Debenhams went into administration in April, and Boots and Marks & Spencer were among those who announced store closures.