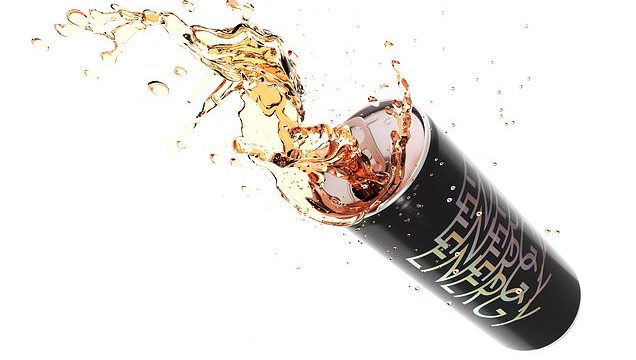 A THIRD of British children consume at least one energy drink a week, Government-funded study finds

One in three British children are consuming caffeinated energy drinks at least once a week, research suggests.

A Government-funded trial looked at the drinking habits of thousands of youngsters between 2013 and 2021.

Those who consumed the ultra-caffeinated drinks weekly were more likely to suffer headaches, stomach cramps and sleep problems. They were also more likely to use alcohol or smoke and were more prone to irritability and being excluded from school.

On average, caffeinated energy drinks like Red Bull and Monster Energy contain the same amount of caffeine as a double shot of espresso.

The latest review, by experts at the York University and University College London, is the result of a 2018 Government consultation on banning the sale of energy drinks to children.

With only two UK studies on the topic available, further research was asked for.

While the authors of the new study said their findings should be treated with caution, they said the data supports the current policy of banning the sale of energy drinks to children under 16.

They added that better education on the drinks and more prominent warning labels could also help reduce consumption among young people.

However, the British Soft Drinks Association insists the industry is doing enough to discourage children from buying the drinks through current warning labels. 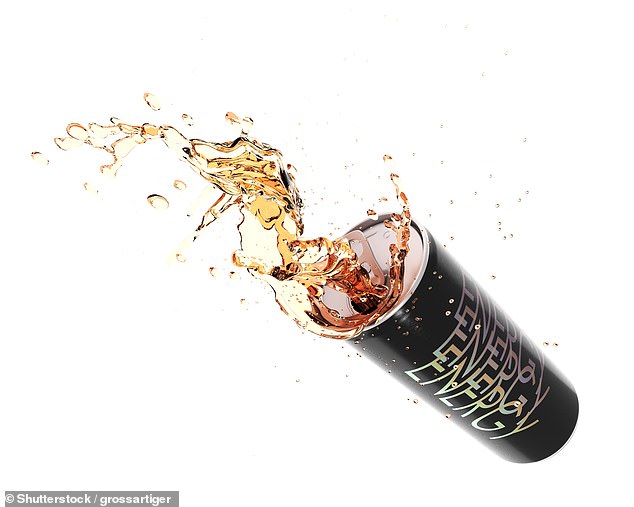 Energy drinks are a popular choice of beverage among young people, with the latest research indicating that up to a third of British children have at least one of these highly caffeinated beverages a week

In the new study, published in BMJ Open, the experts looked at dozens of child behavioural studies published between 2013 and July 2021 — including 74 British studies.

They found that between 3 and 32 per cent of children consumed energy drinks on at least one day per week in the UK.

In one large UK study, about a quarter of teenagers aged 13 and 14 had one or more caffeinated drink per week, rising to between a quarter and a third of children aged 15 to 16.

Another study from Wales found children who had energy drinks once a week or more were significantly more likely to report physical symptoms, such as trouble sleeping, headaches and stomach problems, than those who drank none.

The NHS advises that that energy drinks should not be consumed by young children.

In comparison to the the UK, international studies indicated that between 13 to 67 per cent of children worldwide had consumed energy drinks in the past year.

The overall results also showed that having the drinks of five or more days per week was associated with low psychological, physical, educational, and overall wellbeing.

Lead author of the new review, York’s Claire Khouja, said: ‘While more research is needed to track the effects of energy drinks on children who drink them, our research has uncovered consistent evidence of links between the regular consumption of these drinks and harmful effects on children’s overall wellbeing.

‘These findings offer support for a government policy banning the sale of energy drinks to children.

‘Our study also indicates that children who are better informed about the contents of energy drinks, drink less, suggesting that an education campaign and/or more prominent warnings on packaging could reduce consumption.”

Energy drinks are marketed as a way of getting a boost and contain caffeine as well as other ingredients such as vitamins, sugar, guarana and ginseng root.

Last year, medics writing in the British Medical Journal (BMJ) warned of the dangers of energy drinks after a student who drank too many developed heart failure.

He was admitted to intensive care and was so ill that doctors were considering whether he needed an organ transplant.

In the latest study, the researchers said their findings rely on surveys and so cannot prove that energy drinks cause problems for children.

They said the overall evidence was weak, but it was consistent, and further studies could be needed.

The British Soft Drinks Association’s director general, Gavin Partington, said: ‘Our members do not market or promote energy drinks to under-16s, nor do they sample products with this age group.

‘In addition, energy drinks carry an advisory note stating ‘not recommended for children’.

‘The BSDA Code of Practice on energy drinks was introduced by and for our members in 2010 and contains a number of stringent points on responsible marketing. We remain committed to supporting the responsible sale of energy drinks.’

ENERGY DRINKS – ARE THEY SAFE?

There has been a stark rise in Britons’ thirst for caffeinated drinks – at least 600 million litres are drunk every year, 200 million more than ten years ago.

Some 55 per cent of those aged between 12 and 24 years old suffer everything from vomiting and chest pains to even seizures from the drinks, despite most consuming less than the recommended one-to-two beverages a day, a Canadian study found.

Previous research has linked energy drinks, such as Red Bull, to obesity, heart abnormalities and even sudden death due to their high-sugar and caffeine content.

Most energy-drink consumers are unaware of the products’ main ingredients, health implications or appropriate serving sizes, experts have said.

How much caffeine do they contain?

A 250ml serving of a typical energy drink – half the standard bottle or can size – contains 80mg of caffeine per litre – twice as much as a regular cola drink, but the same as a 60ml espresso.

Experts have warned that caffeine-packed energy drinks could be fuelling a record rise in diagnoses of irregular heartbeats, one of Britain’s biggest killers.

Just one energy drink daily could trigger arrhythmia, an abnormal heart rhythm which increases the risk of stroke five-fold.

It is thought that this is because excessive caffeine consumption dramatically increases the amount of calcium released within the heart’s cells, disrupting the electrical rhythm.

Experts also warn the addition of high quantities of sugar in energy drinks could be a reason for their potency.

How much sugar do they contain?

Campaigns, such as Action on Sugar have called for a complete ban on the products for under 16s.

Their study in December 2017 found the average sugar content was more than an adult’s entire maximum daily recommendation for sugar intake in the UK.

Likewise, 78 per cent of products exceeded the maximum daily recommendation for sugar intake for a child aged seven to ten 10 years – 24 g or six teaspoons.

Certain manufacturers reformulated before the Soft Drinks Industry Levy in April 2018 in the UK.

Before reformulation in 2017, the Punched Energy and Tropical Guava Flavour products from Rockstar, contained a staggering 78g, or 20 teaspoons, of sugar per 500ml serving – more than three times the daily recommendation of 25g for women and 38g for men.

Now, these drinks contain 24g of sugar per 500ml, the equivalent of six teaspoons per 500ml.