Content warning: This article contains details about suicidal ideation. If you are having thoughts of suicide, call or text 988 to be connected to a Suicide & Crisis Lifeline counselor at no cost to you.

Like most angsty youth, early adolescence was difficult for me. I first started feeling depressed at 12 years old, but the catalyst for those feelings started long before puberty ever set in. When my family and I moved to suburban Connecticut from Baltimore when I was 5 years old, the distinct difference between being in a diverse and cultural community to being the only Black family for miles hit me hard.

As I got older, fitting in was my biggest challenge. There were a handful of other Black kids at school, but I never felt like I truly connected with them because I spoke differently and didn’t wear “cool” clothes. I felt like I didn’t have a place; I didn’t belong with either my Black or white peers, and ultimately, that made me internalize a lot of sadness and frustration.

By 16, I was tired. I decided I didn’t want to live anymore. I was so consumed by my pain that I just wanted to go. There weren’t any factors that could’ve changed how I felt because I was so in it.

One day, I had a really stressful moment from these suicidal thoughts and I completely broke down in history class. I was sent to the guidance counselor, and she was the second person I ever told how I was feeling and how advanced all the sadness and anger were inside me (the other person was my best friend who was dealing with similar issues). The counselor let my parents know, and they addressed it, but nothing really came from that.

But when I was almost 17, a lot changed. I didn’t have a therapist at the time, so journaling was a big outlet for me. During the winter that same year, I wrote in my journal, It’s strange, I feel lighter today. I don’t know what this is—it could just be a temporary thing. We’ll see how tomorrow feels. Tomorrow came, and I still felt lighter. The end of the week came, and it was the same thing.

Eventually a month went by, and I was feeling this weird but lovely sense of relief that I hadn’t felt since I was a younger child. The darkness was gone. I remember writing, I don’t know how this has happened. I can’t explain how I feel, but I know I don’t feel sad or depressed right now. It sounds so corny, but the only way I could try to explain or rationalize it was that I was touched by an angel.

I was so consumed by my pain that I just wanted to go.

Still, I don’t want to give the impression that I had some miraculous encounter and then everything was better and brighter—that’s not my story, and that’s not how mental health works. As I went off into college, I still had many highs and lows, and that moment when I was 17 was just my first “high.”

As I entered adulthood, I was still learning about and navigating my mental health. After I earned my master’s degree from Georgetown University in 2017, I had a lot going on: Student loans were piling up, so I found a reliable side hustle to offset costs as an Uber Eats courier. Then I landed a role at an aerospace agency leading their social media marketing teams in the U.S. and United Kingdom. I loved my job, but I was super stressed because I was performing two roles at the company. During my commutes, my chest felt tight, and my heart felt almost squeezed. I went to an urgent care clinic and learned that those moments were actually anxiety-induced panic attacks.

After more than two years in the role, I eventually decided to step away and try something new—the panic attacks were a sign that it was likely the right time. I discovered an open model call for Sports Illustrated during my first year at my job, and I gave it a shot. I finished in the top 16 out of 10,000 women, but then I tried out again the next year, and I won, becoming a 2021 SI Swimsuit Rookie. Roughly six months later, I put in my two-week notice to pursue modeling full-time.

Transitioning from the corporate to modeling world was not easy. Making a career shift is a huge, scary deal by itself, but then the pandemic hit shortly after. I started my own social media marketing business and was still driving Uber Eats, which helped me come out of the pandemic relatively unscathed financially. It was daunting, but I had a wonderful support system and even began therapy too—it changed the way I see myself and talk to myself. 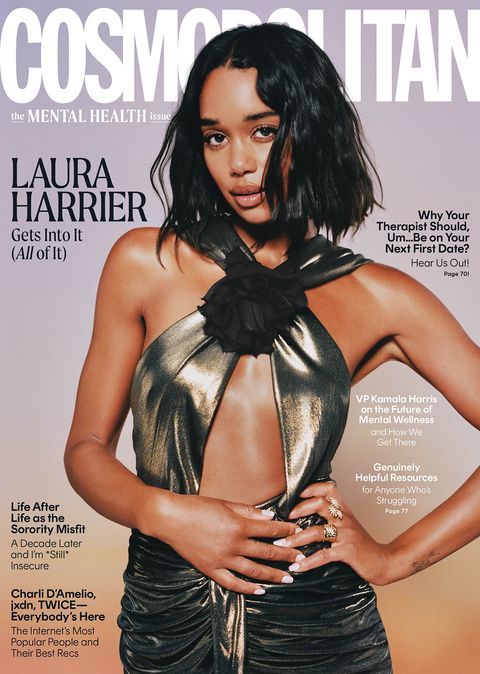 Around that same time, I was inspired to start a mental wellness company for women called Feel Good Babe. The purpose of Feel Good Babe is to be a safe space for women to share their mental health struggles and find resources and inspiration to keep going. I like to think of the brand as the grown-up version of my college advice column “Brazen Backbone,” which was for depressed and suicidal teenagers and young adults like myself. It’s a super meaningful full-circle moment.

Now, at 30, I’m finally comfortable fully living in my truth: I’m funny, creative and successful, and I also experience deep sadness, stress, and anxiety. I keep tight digital and real-life boundaries to protect my peace, but it’s also incredibly important to me to be open about what I go through to help destigmatize mental health, especially as a Black woman.

In the Black community, we don’t talk about mental health enough—there’s a huge cultural stigma attached to it, particularly among older generations. Some elders have a tendency to compare trauma or over-spiritualize it. It feels like a lot of times in our community, if the “ailment” is not tangible, then it’s fiction. I want to combat that as well as what depression “looks” like.

From goofiness and smiles to quirkiness and sarcasm, depression has many faces—it’s not just sadness. When I was growing up, no one knew I was depressed until I moved the curtain back to reveal my true feelings in a social media post in college. No one would have ever discovered what I was going through otherwise. And that’s why I do what I do.

Depression does not have a finish line. It’s a journey that follows you throughout your life—there is no fourth base or touchdown—it just continues. I’m so passionate about transforming the hardships I went through into something useful for others on their journeys. Since I was a teenager, all I wanted to do was change at least one life and remind someone that they’re meant to be here. I’m proud to be making strides toward that purpose.