After being delayed for an entire year due to the COVID-19 pandemic, the 2020 Summer Olympic Games are set to get underway in Tokyo on July 23. While all the gymnastics buzz this year seems to surround the unstoppable force that is Simone Biles, we decided to take a look back at some of the other gymnasts who competed in the games over the last century.

Today’s Olympic gymnastics program consists of three categories: Artistic (what you’re watching when you watch Simone), rhythmic (the one with the ribbons and balls), and trampoline. Artistic gymnastics was introduced as part of the modern Olympic Games when they debuted in 1896 in Athens. Though women started competing in 1928, it was only in teams. It wasn’t until the Berlin games in 1936 when women were allowed to compete in an all-around competition.

Currently, for artistic gymnastics, the men compete in six events: parallel bars, horizontal bar, pommel horse, vault, rings and floor. The women compete in four events: vault, balance beam, uneven bars, and floor. In 1952, the Olympics added separate medals for each apparatus. At the Los Angeles games in 1984, rhythmic gymnastics was added to the mix, and it wasn’t until the 2000 Olympic Games that trampoline was included as an Olympic event.

The artistic gymnasts definitely get the most attention, and are the athletes most likely to appear on a Wheaties box. There are definitely a lot of Gen-X women who had their hair cut and feathered like Mary Lou Retton’s after her big win in 1984. But no matter who your fave is, you can see here how the sport has changed and adapted through the years. 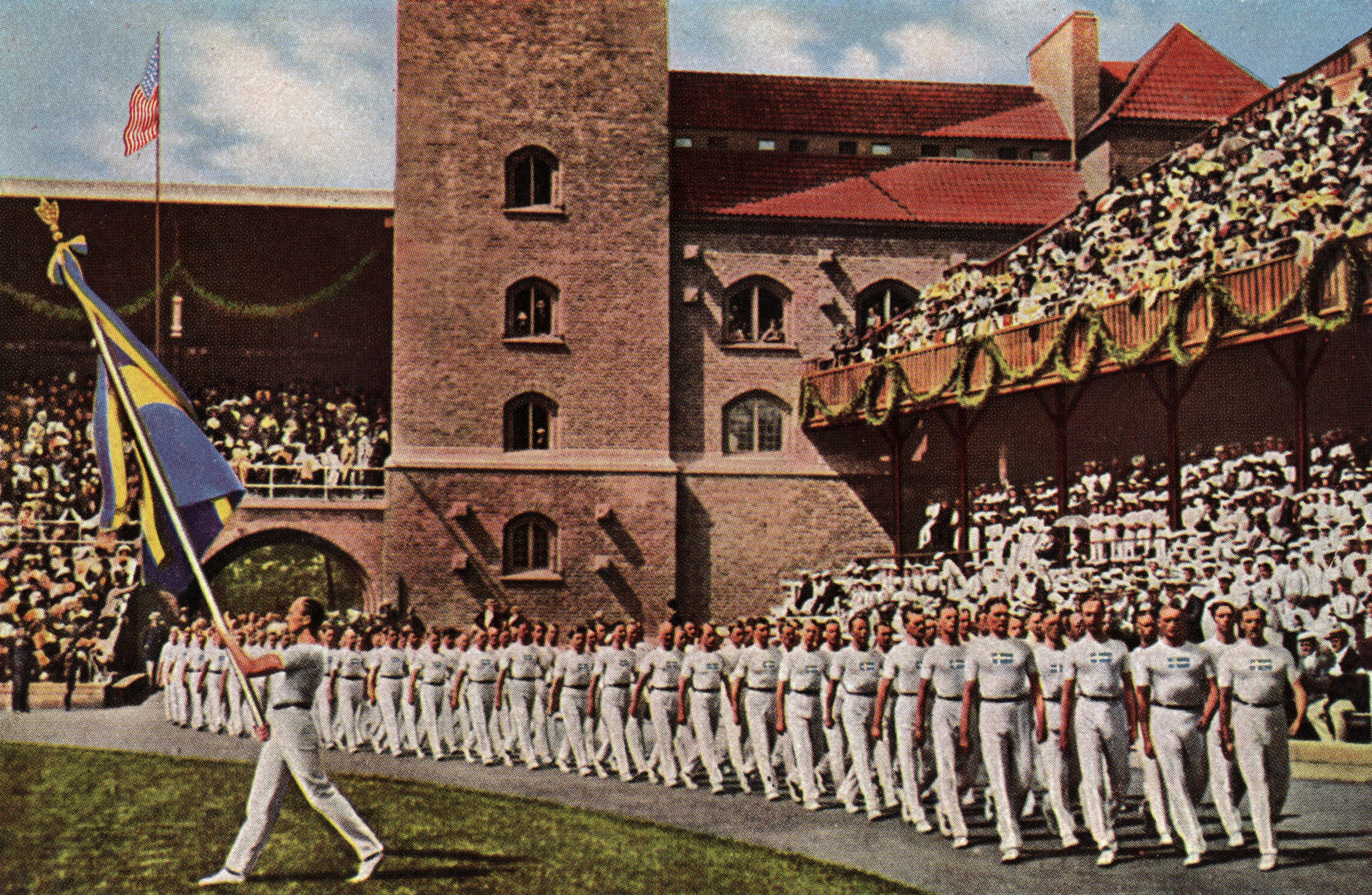 The massive Swedish gymnastics team walks in to perform at the outdoor arena. Yes, outdoors! 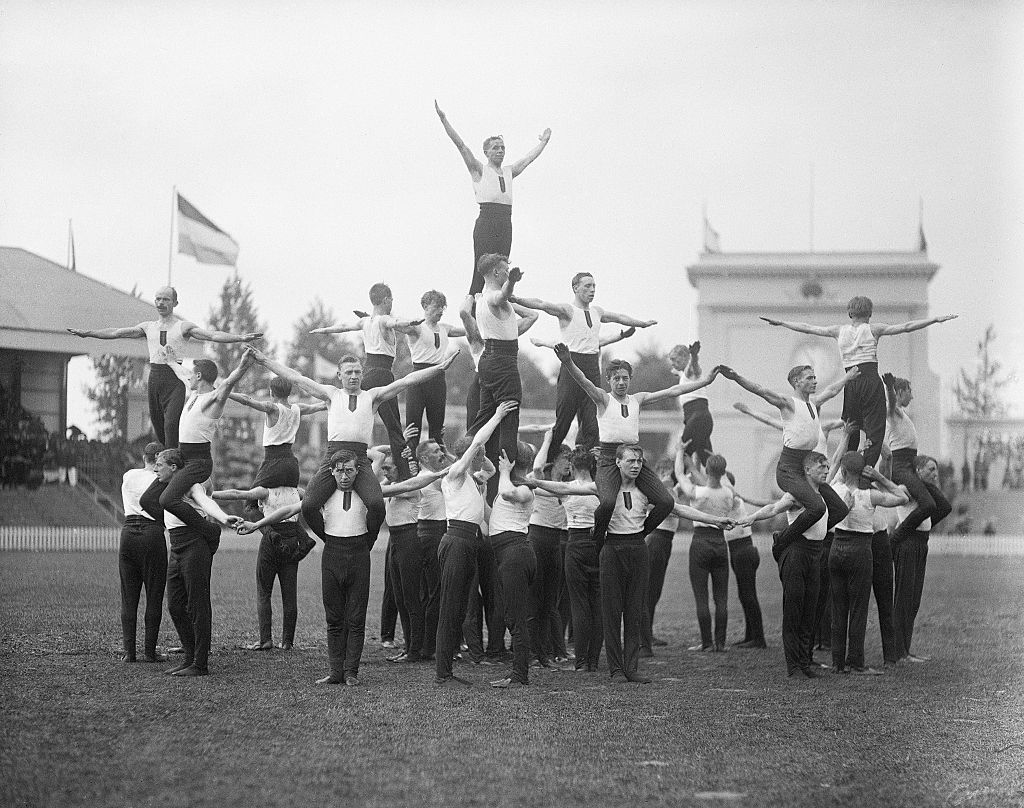 Today’s gymnasts do compete in teams, but not like this! Back in the early days of the Olympics, the gymnasts used to do group performances. It was little like cheerleading! 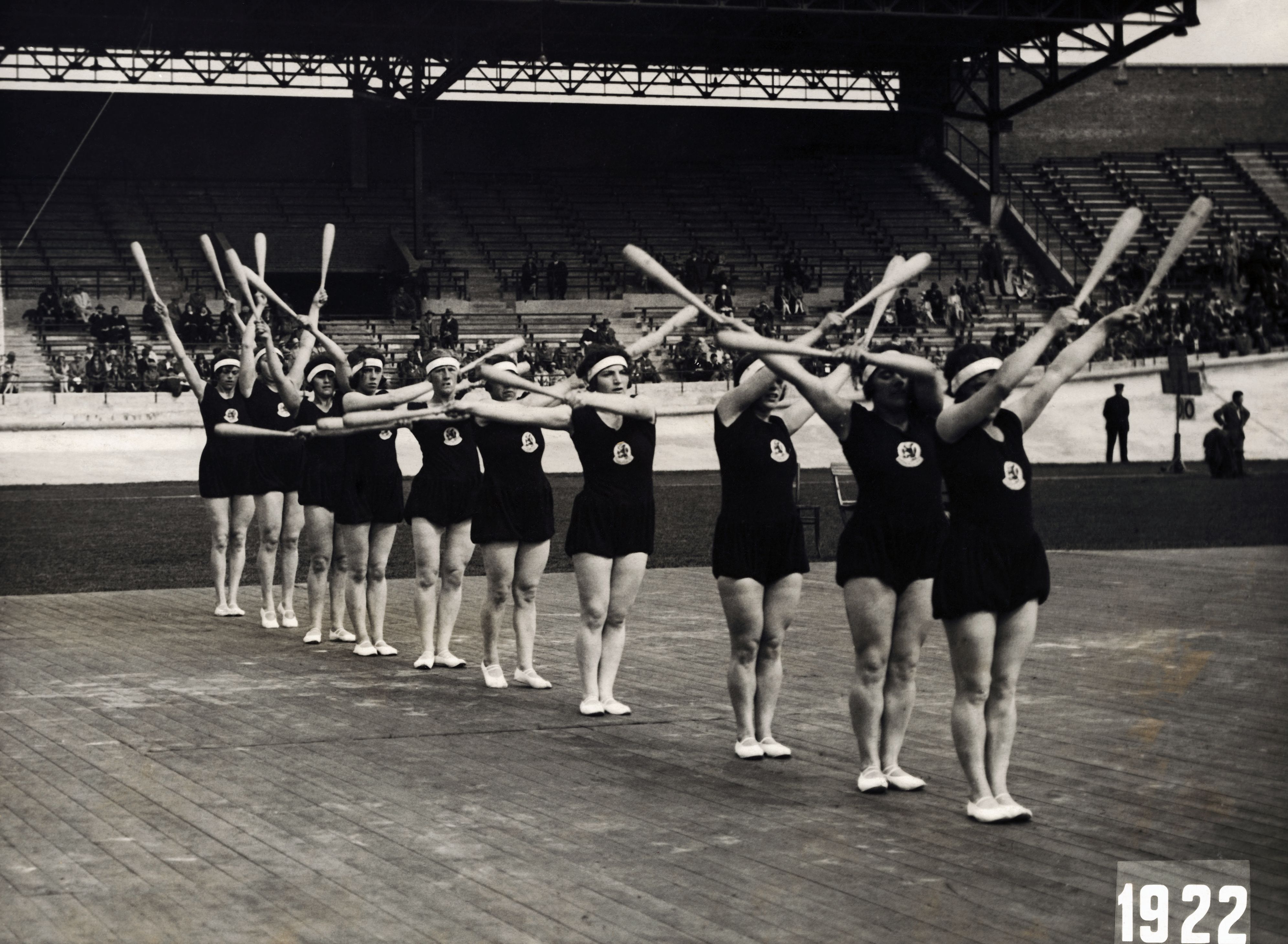 The members of this Dutch team were some of the first female gymnasts to compete in the Olympic Games. 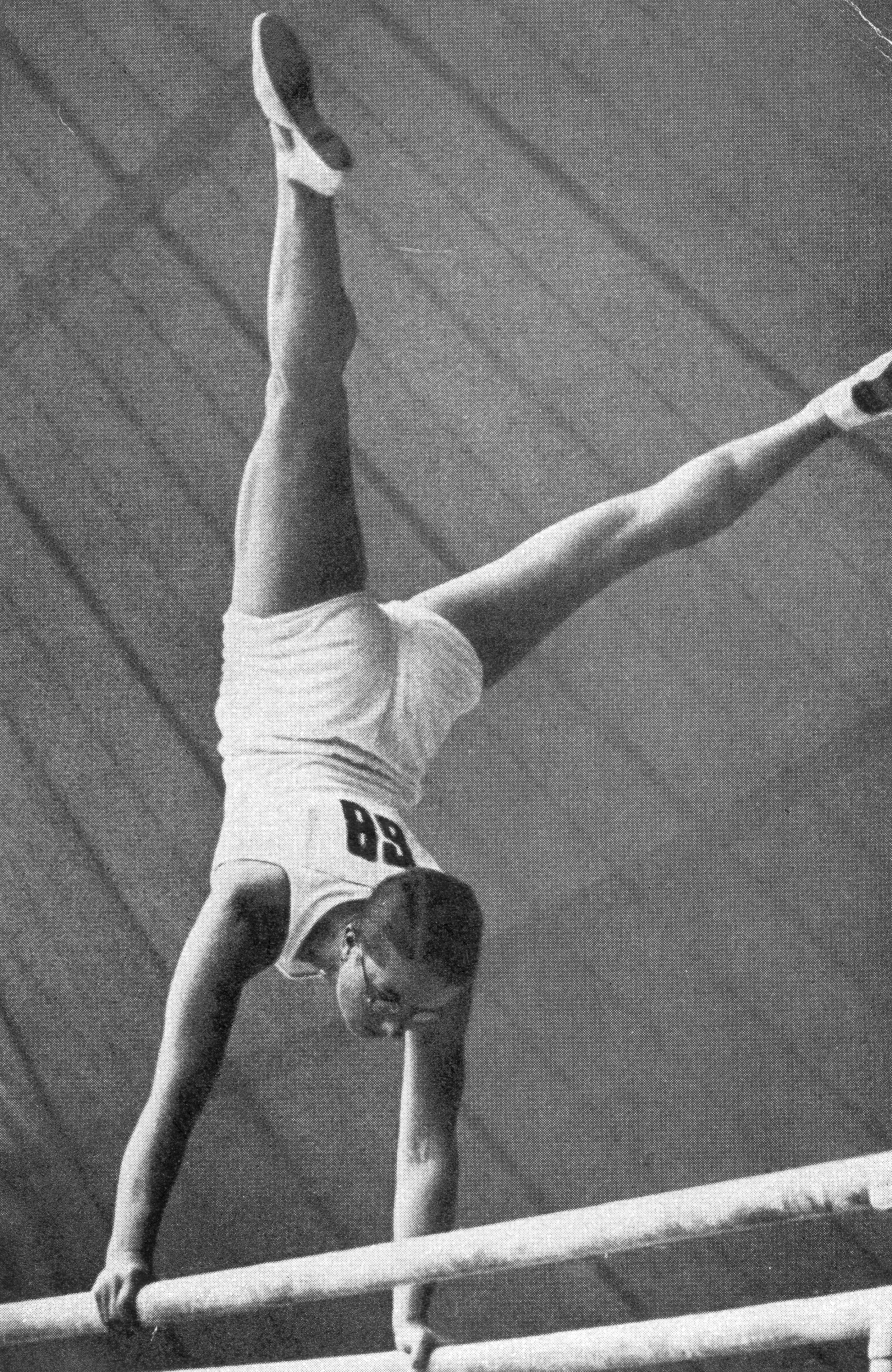 Female gymnast Käthe Sohnemann is seen here competing on the parallel bars (yes, women used to compete on different apparatus’!)and she won bronze in the all-around. 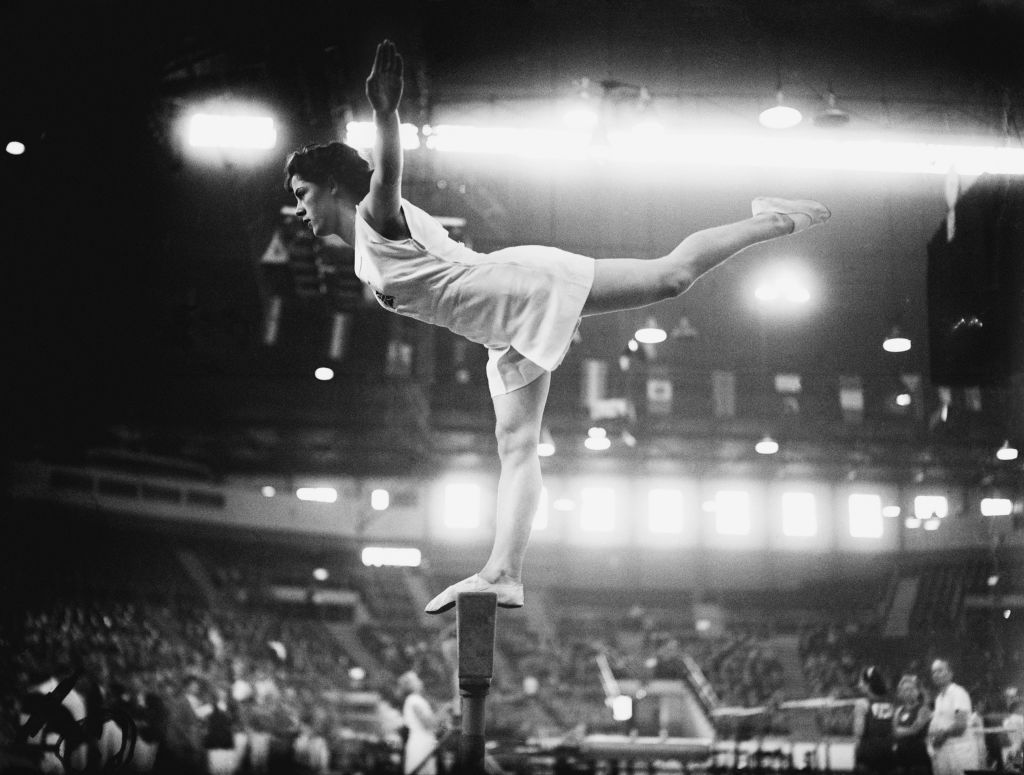 British gymnast Cissie Davies competed in the London games…in a skirt! Can you imagine navigating the already challenging balance beam while wearing a skirt? 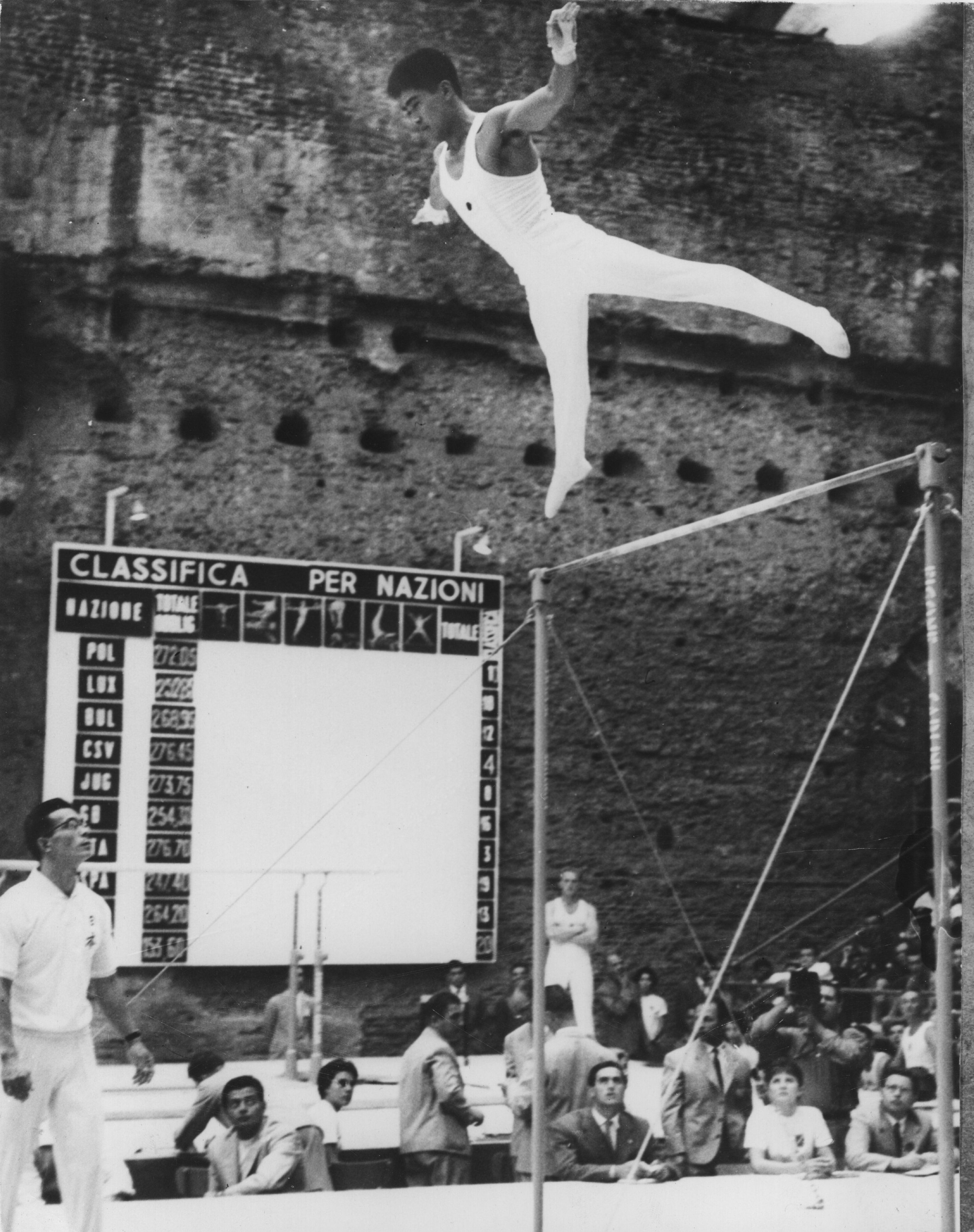 Yukio Endo of Japan helped bring his team to gold during the Rome games, as well as in the 1964 and 1968 games. He also won individual gold at the 1964 games. 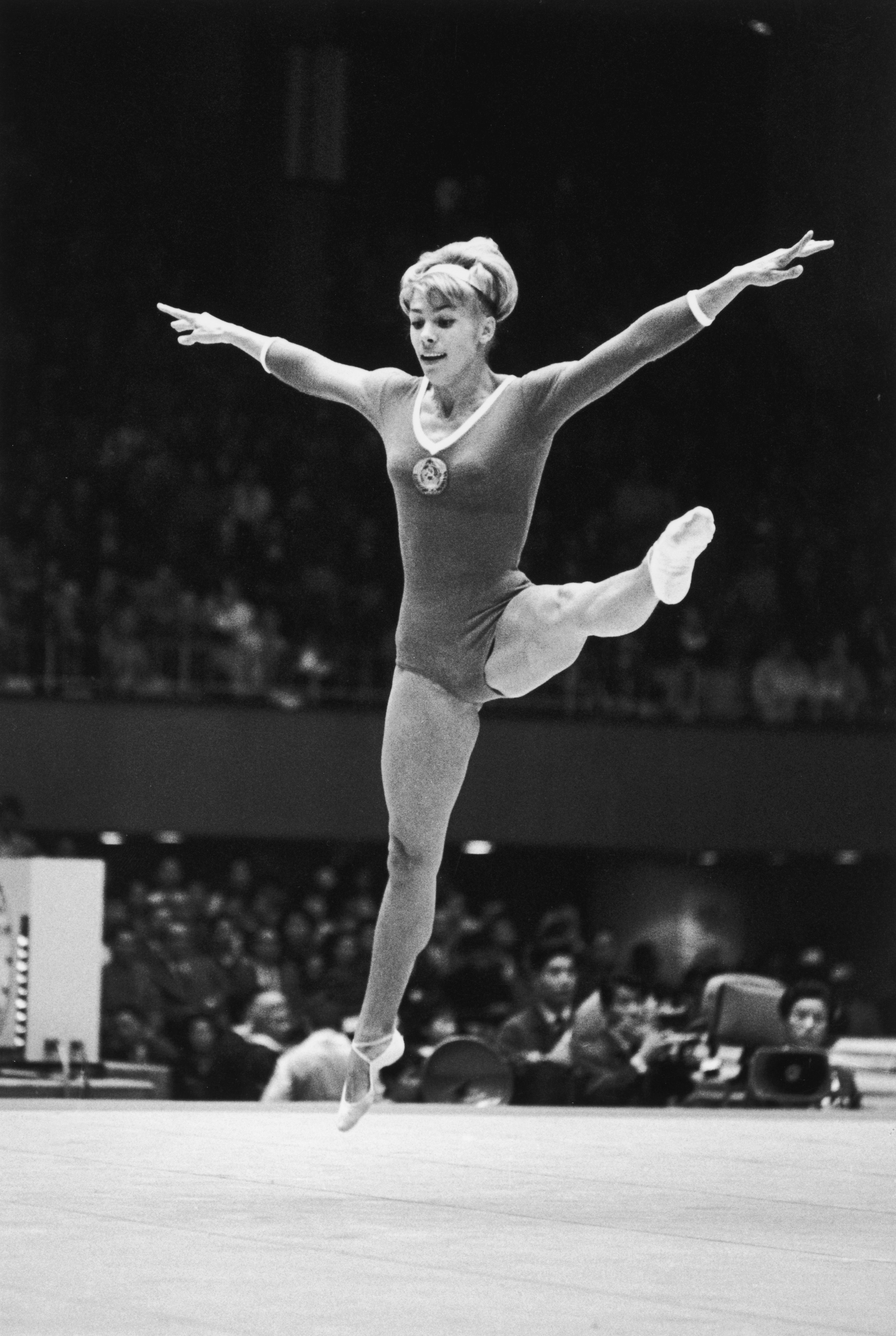 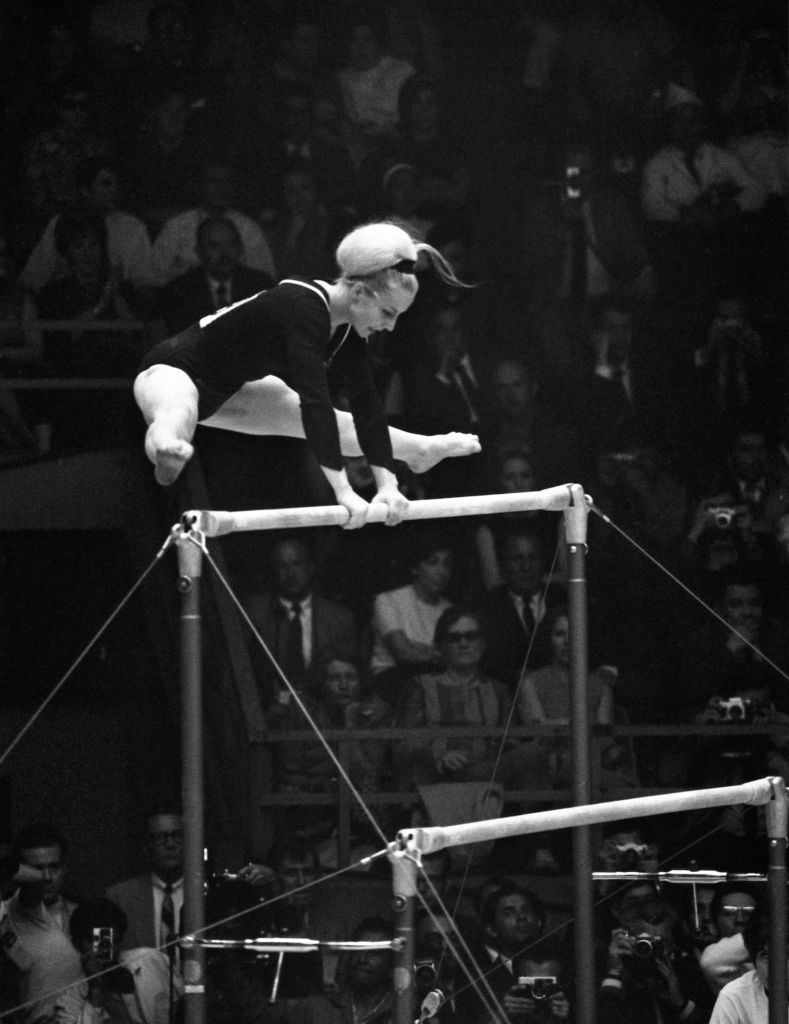 Vera Caslavska of Czechoslovakia took home the all-around gold medal at both the 1964 and 1968 games. 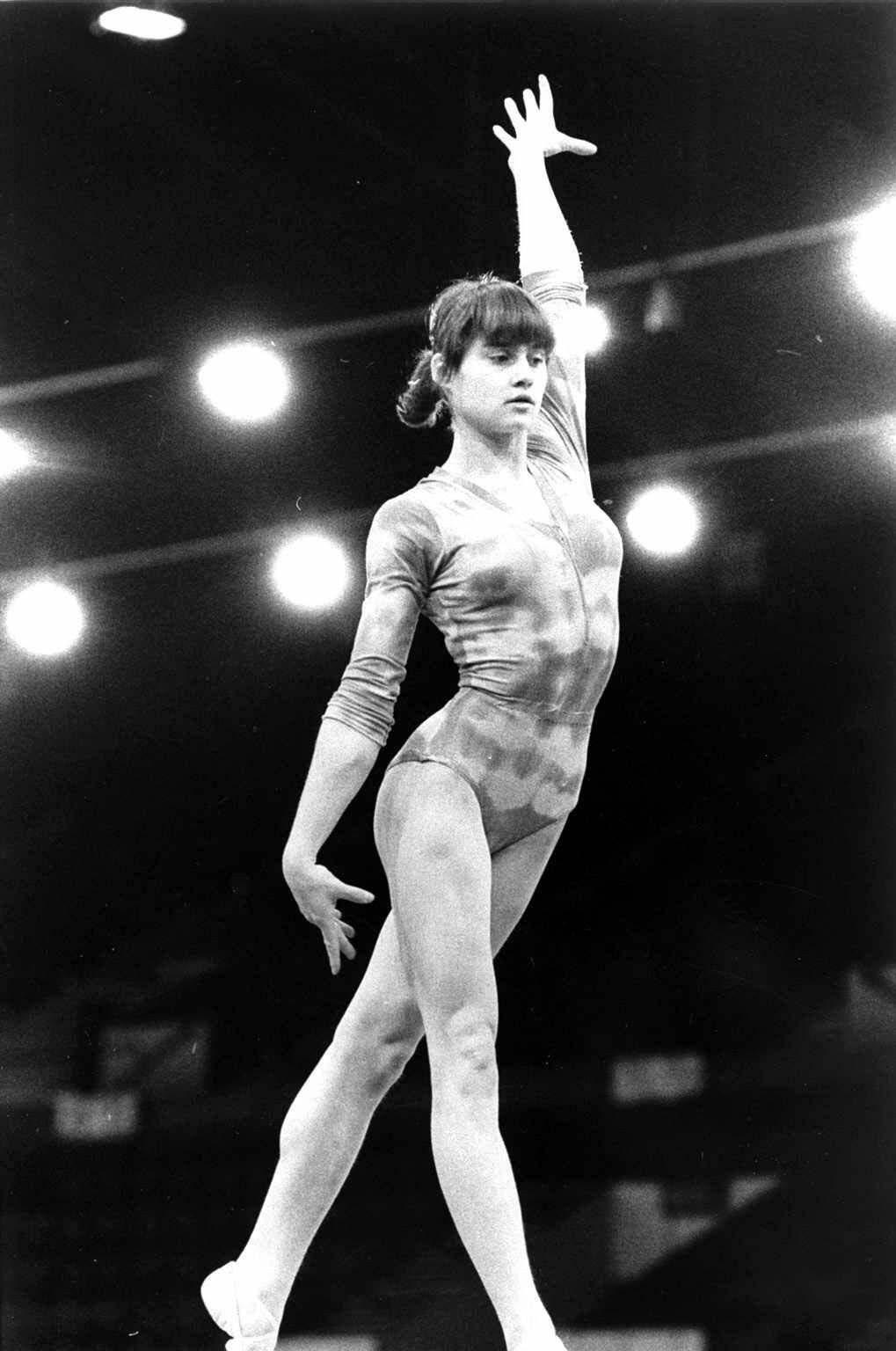 Gold medalist Nadia Comaneci was the first-ever gymnast to earn a perfect 10 in Olympic competition. 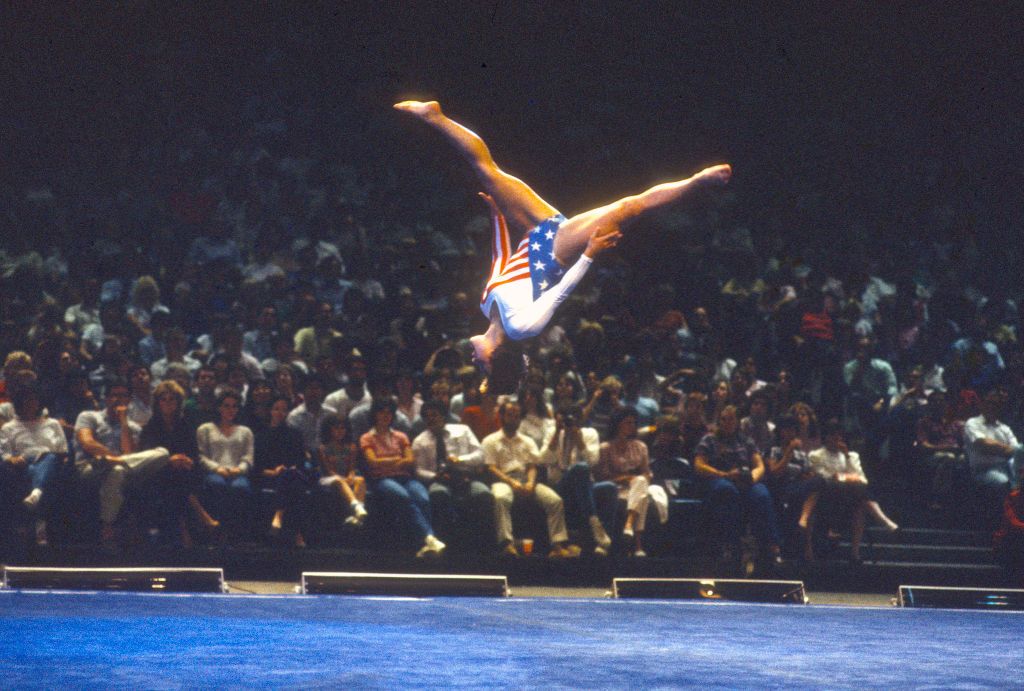 Mary Lou Retton crushed the competition, scored a perfect 10 for her floor routine (and vault), and was the first American to win the all-around gold medal in the Olympics. 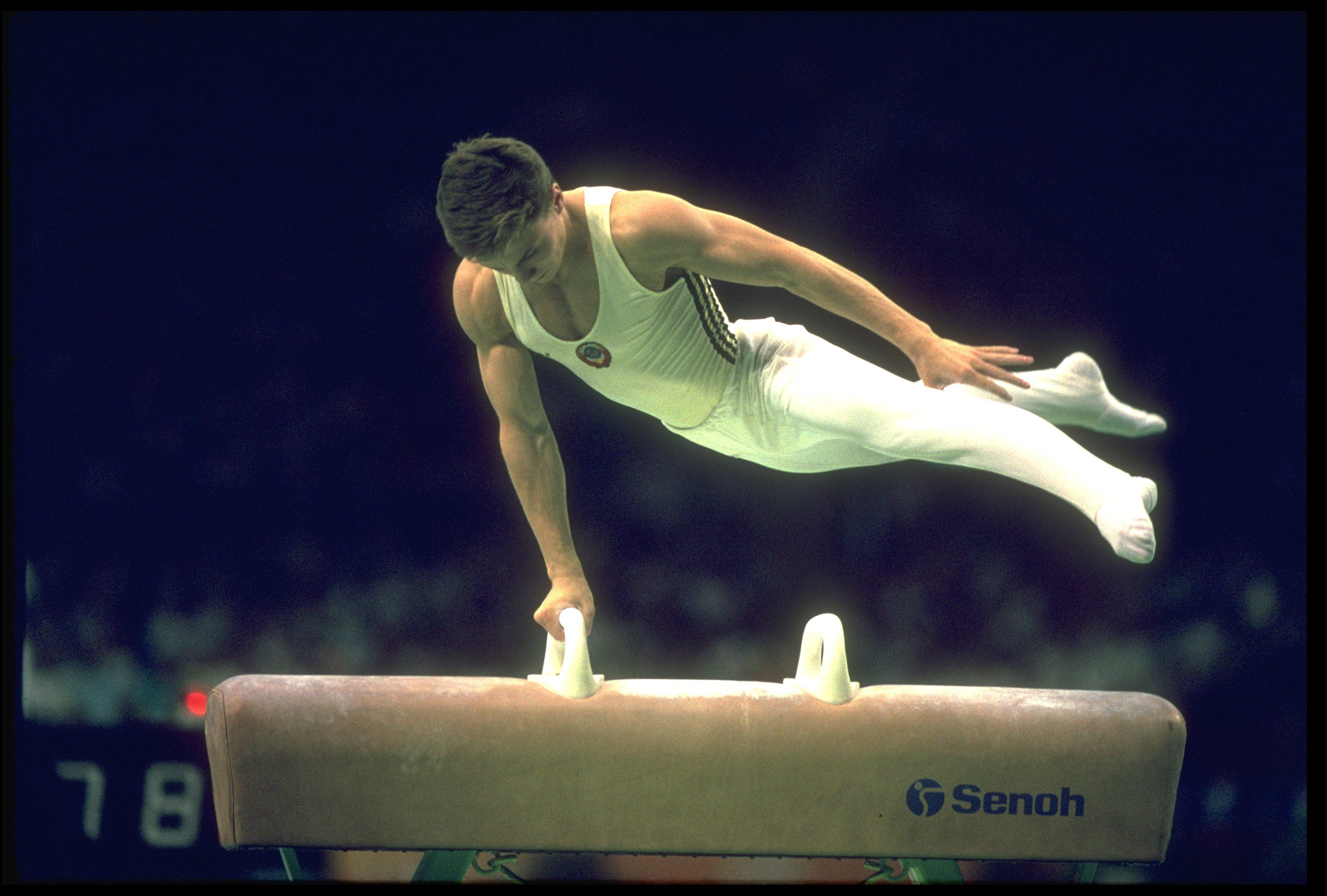 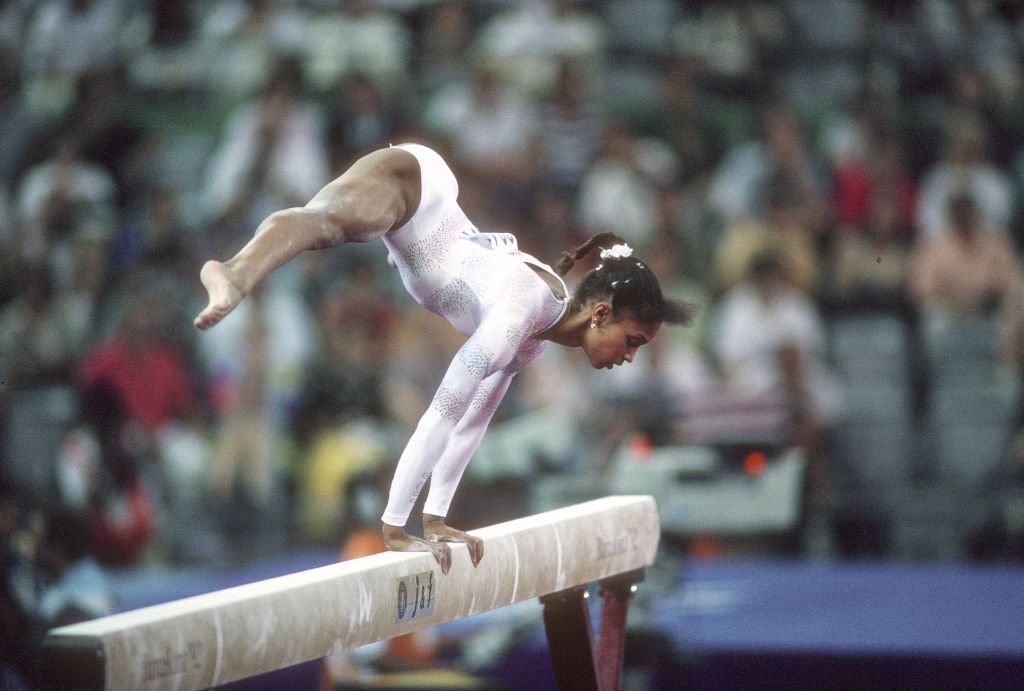 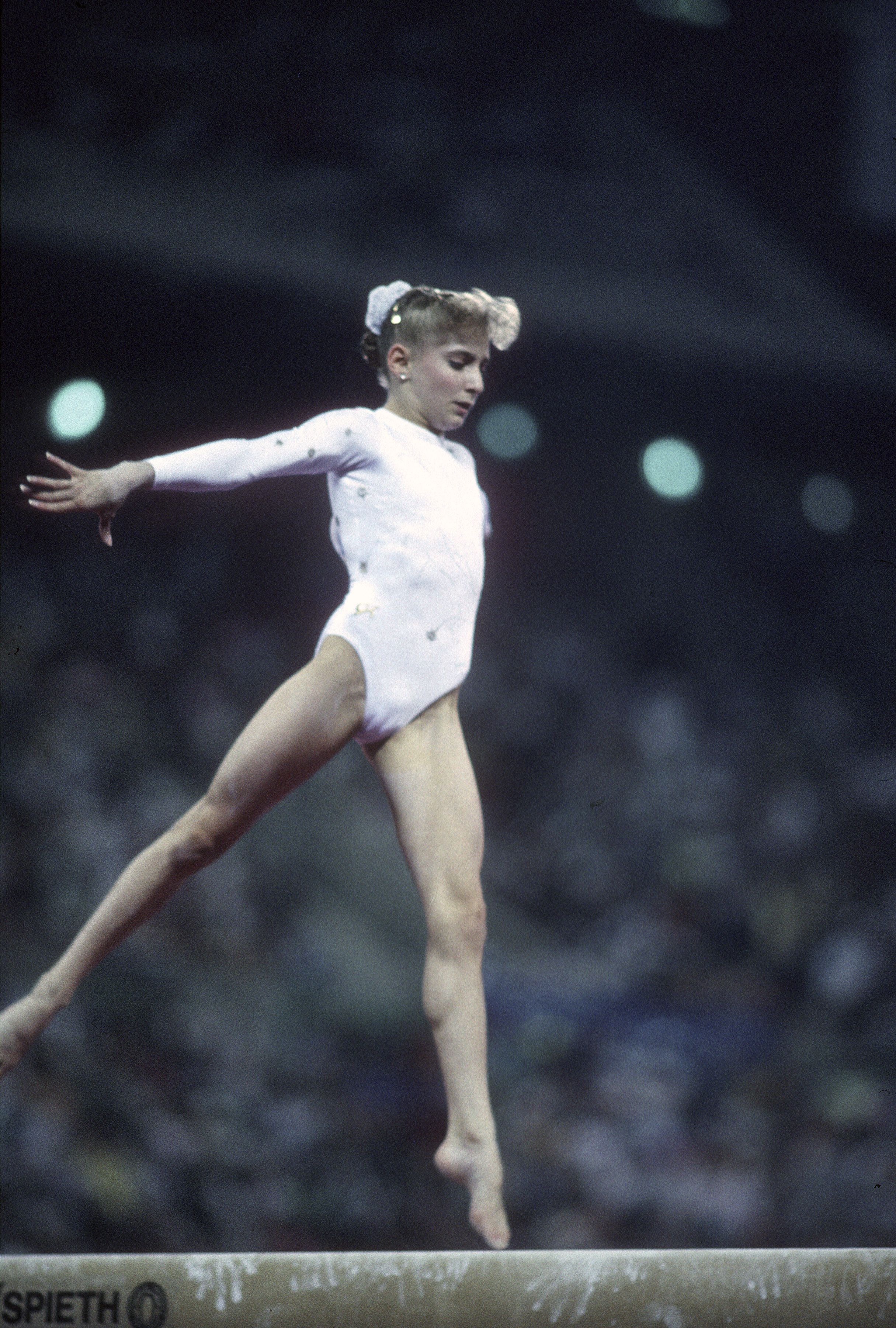 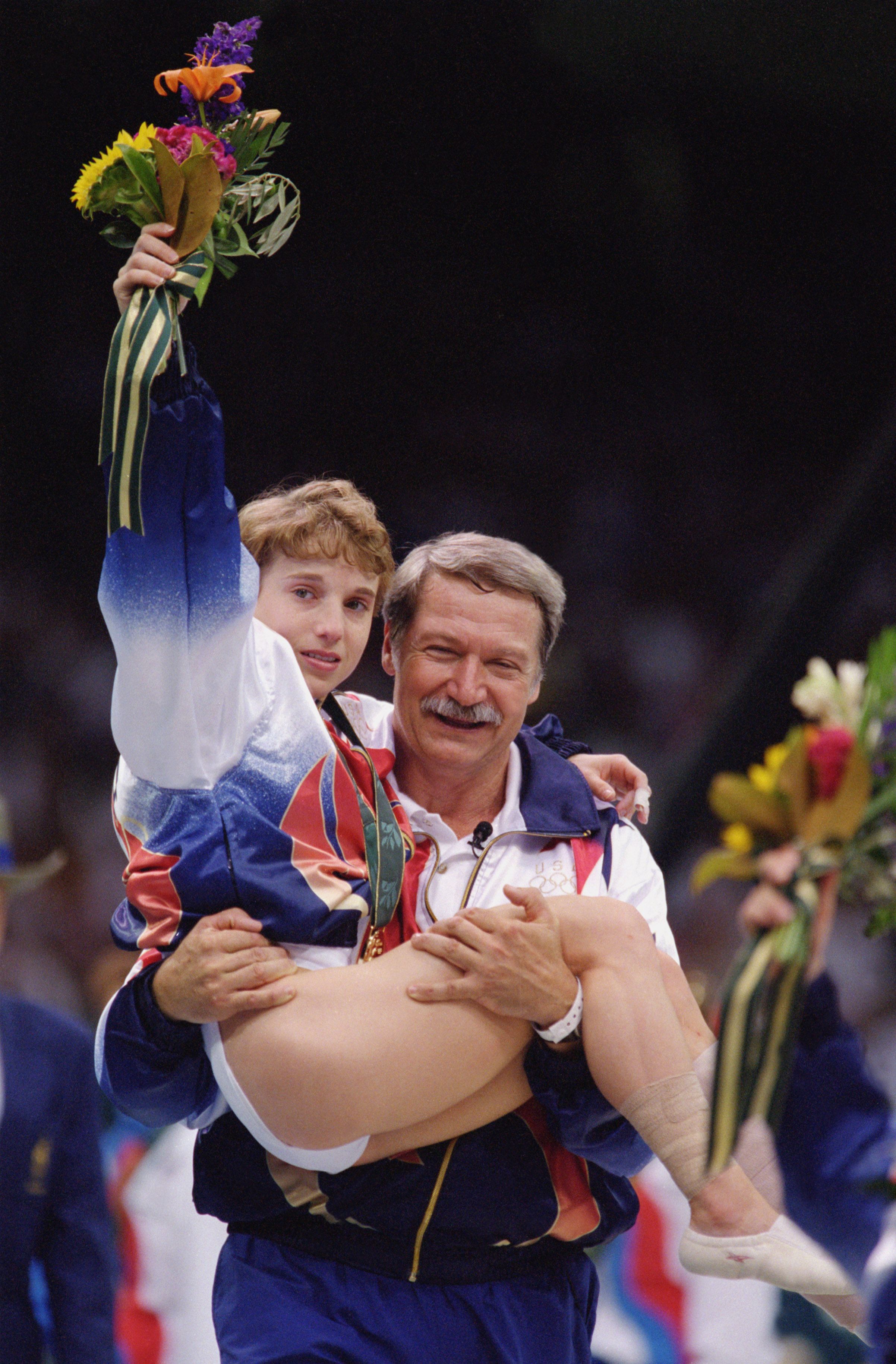 Gymnast Kerri Strug helped the United States’ Magnificent Seven clinch a win in the team all-around competition, even though it meant vaulting on an injured ankle. Coach Bela Karolyi carried her to the podium to claim her medal. 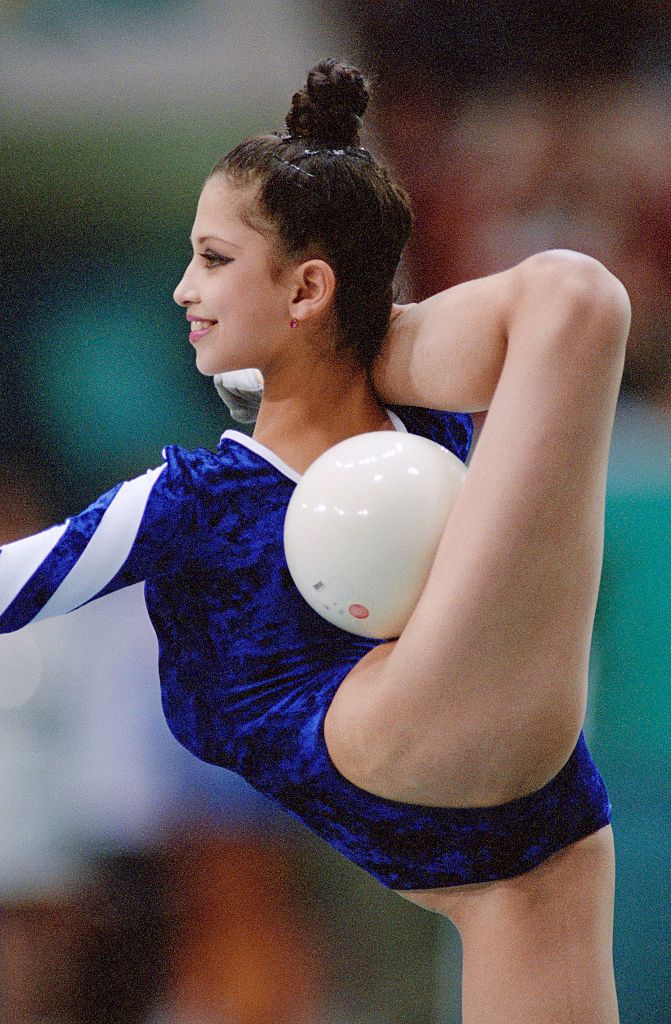 There’s more to rhythmic gymnastics than just the pretty ribbons. Yana Batyrshina of Russia shows off her incredible skill and flexibility with the ball. 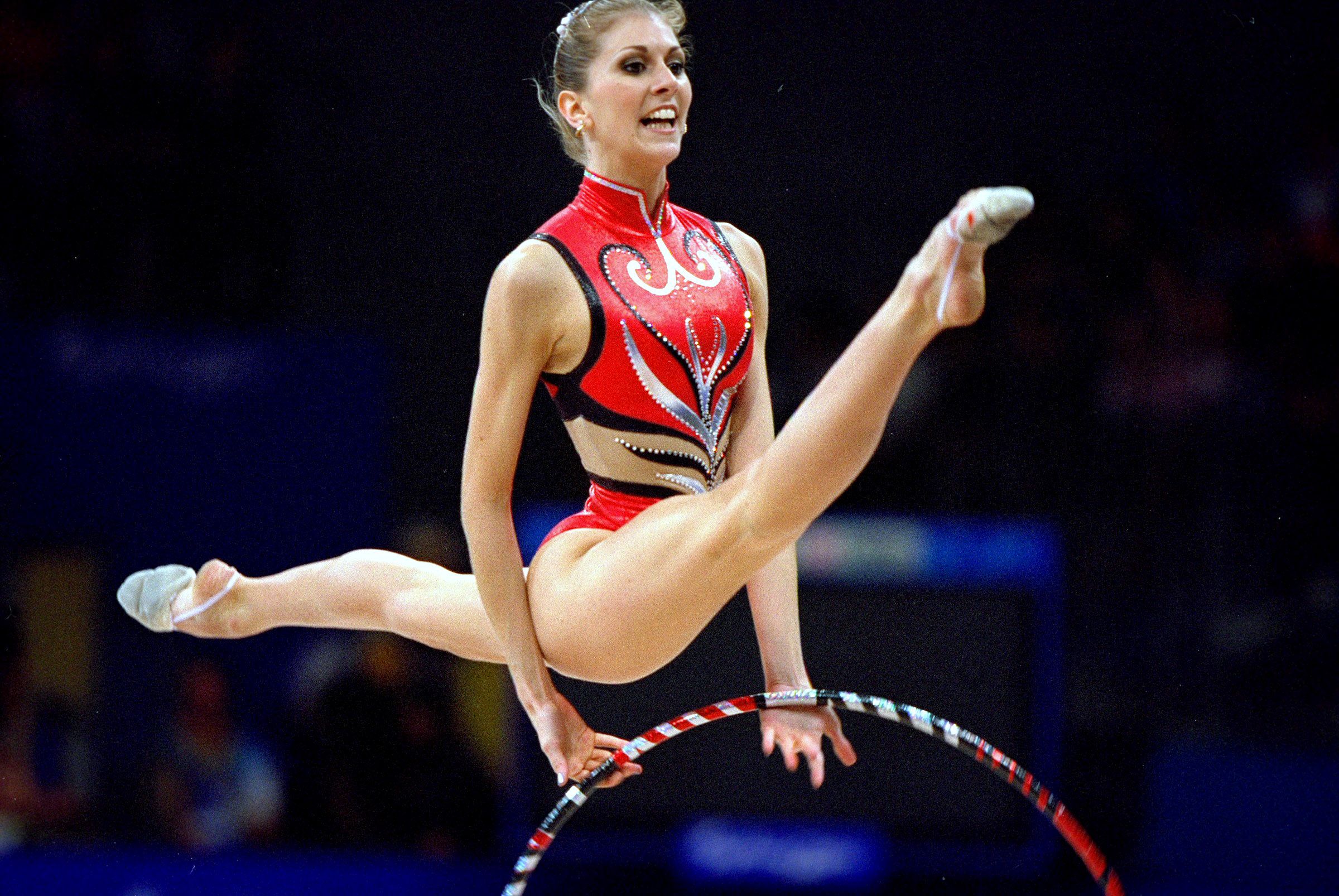 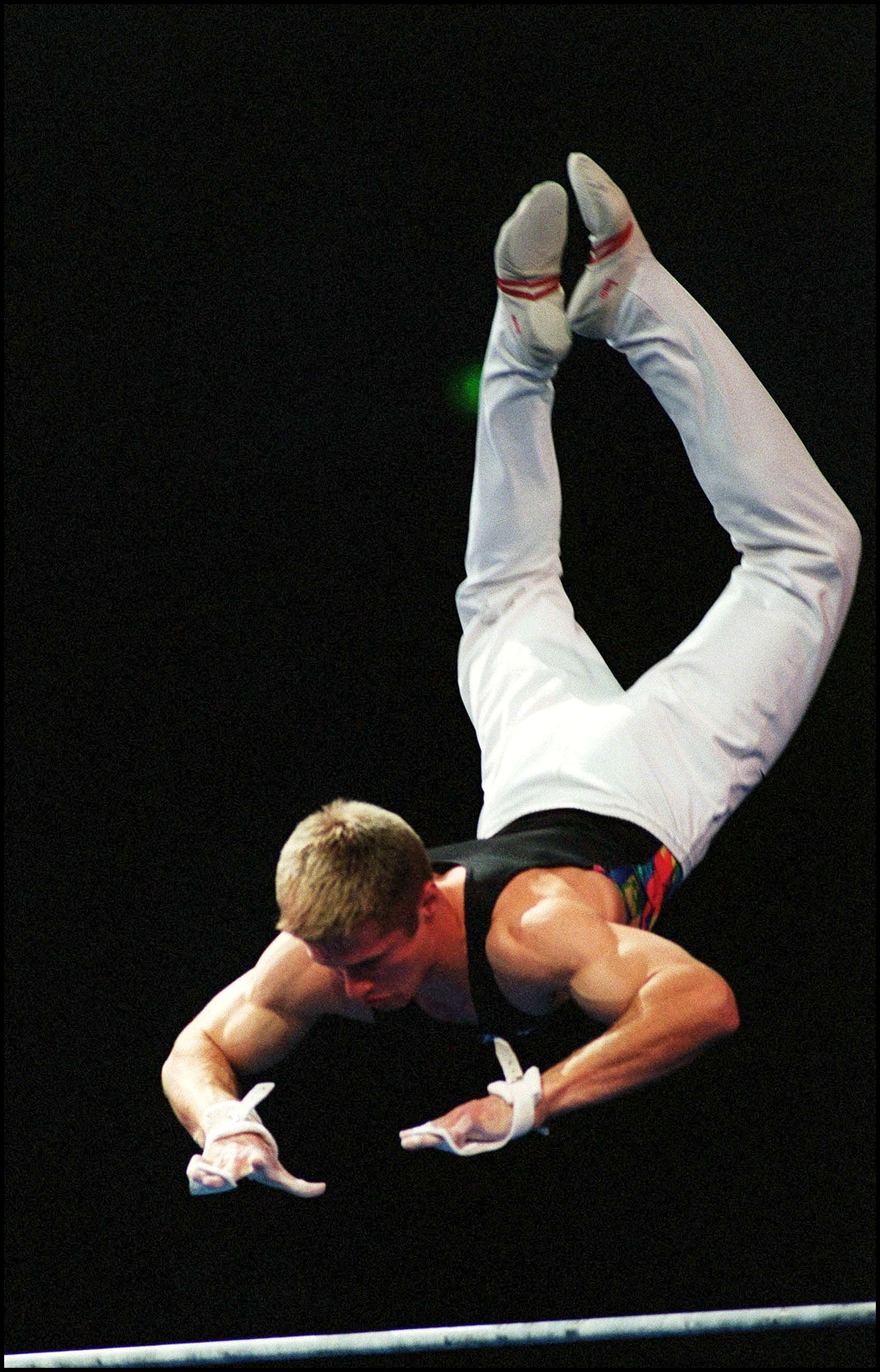 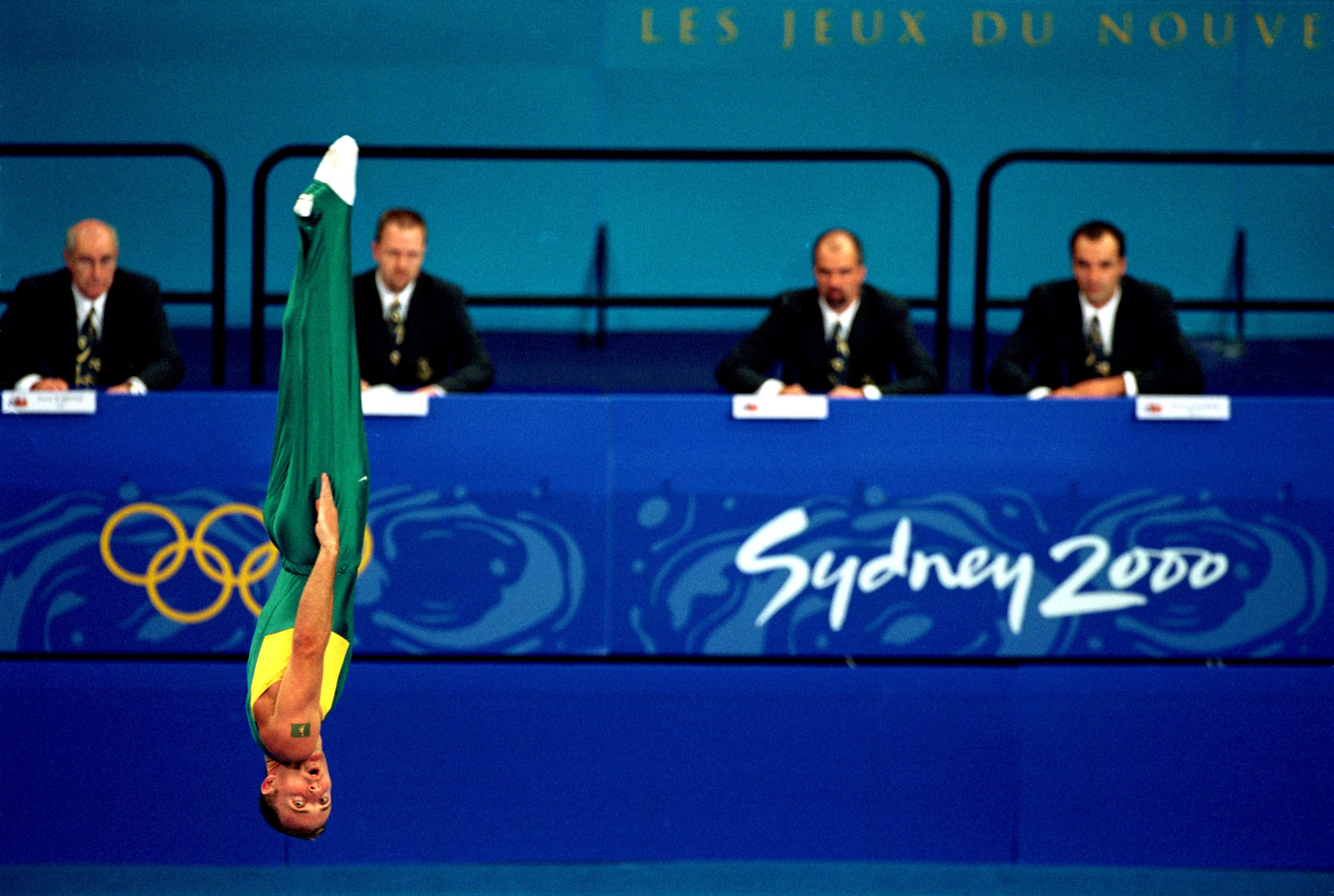 Kids, don’t try this at home! Ji Wallace of Australia proved just how wild the tricks in trampoline can be. 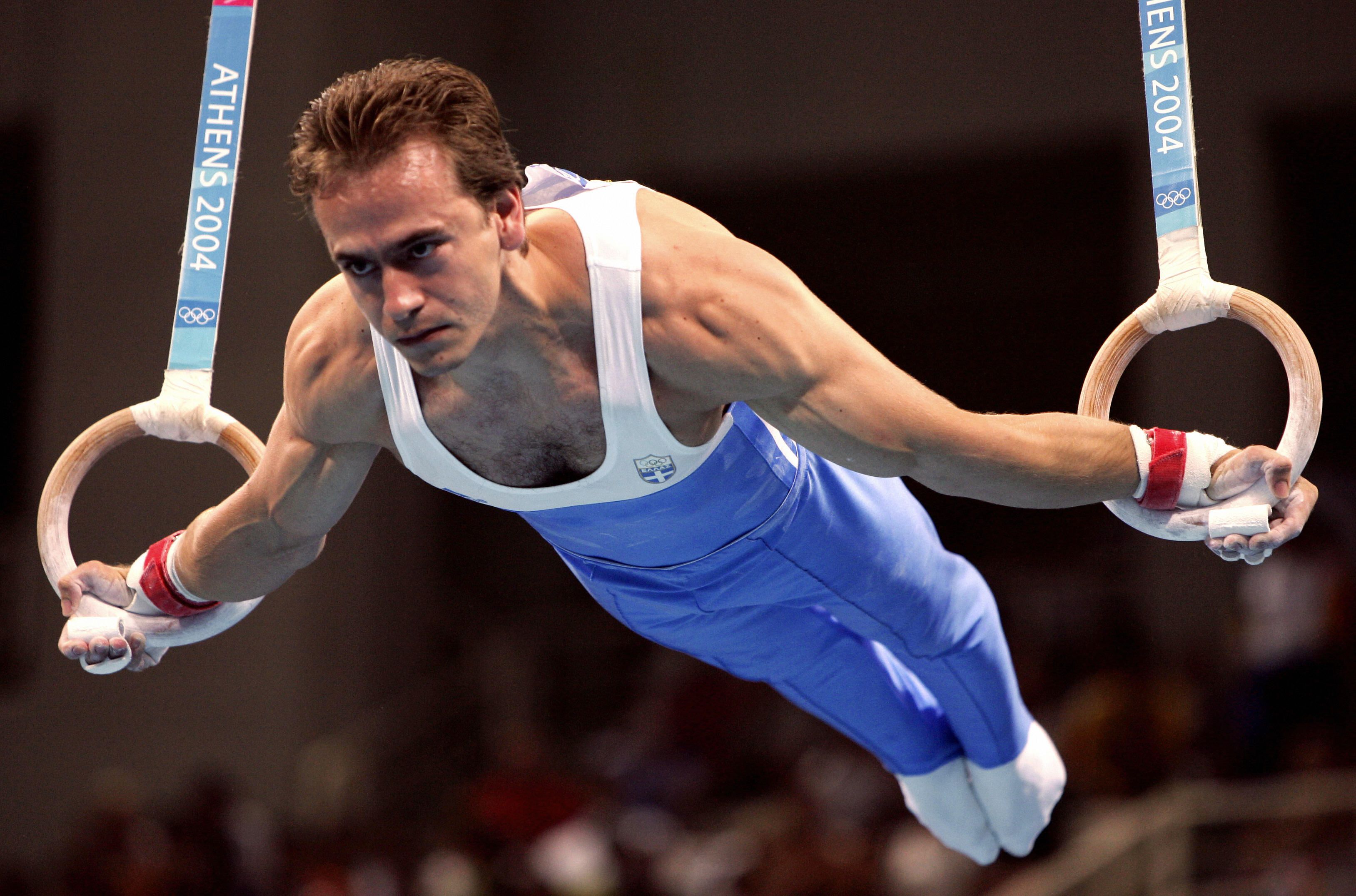 Greek athlete Dimosthenis Tampakos won a gold medal for his performance on the rings at the Athens games. 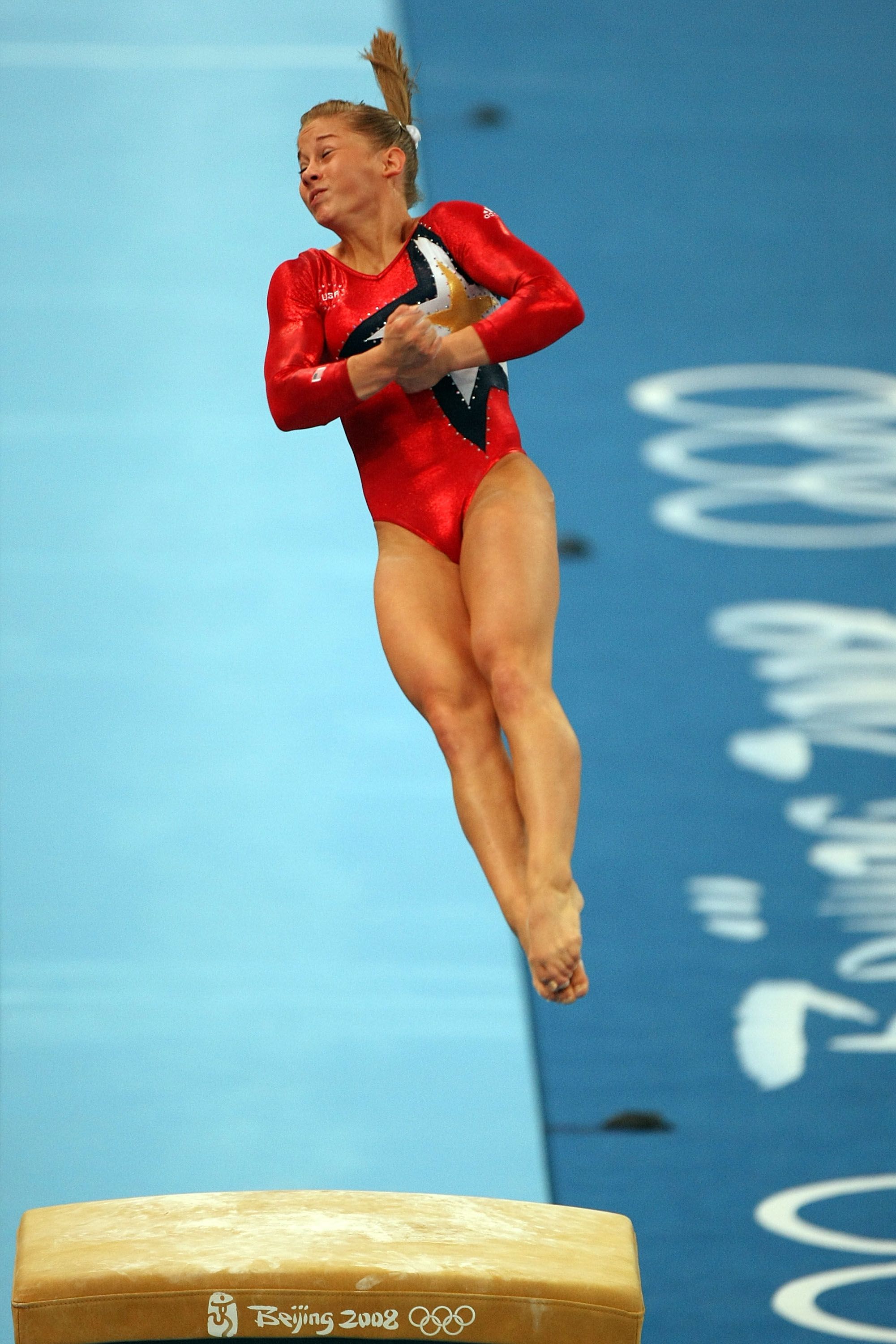 USA gymnast Shawn Johnson reached crazy heights off of the vault to take home a silver in the all-around competition at the Beijing games. 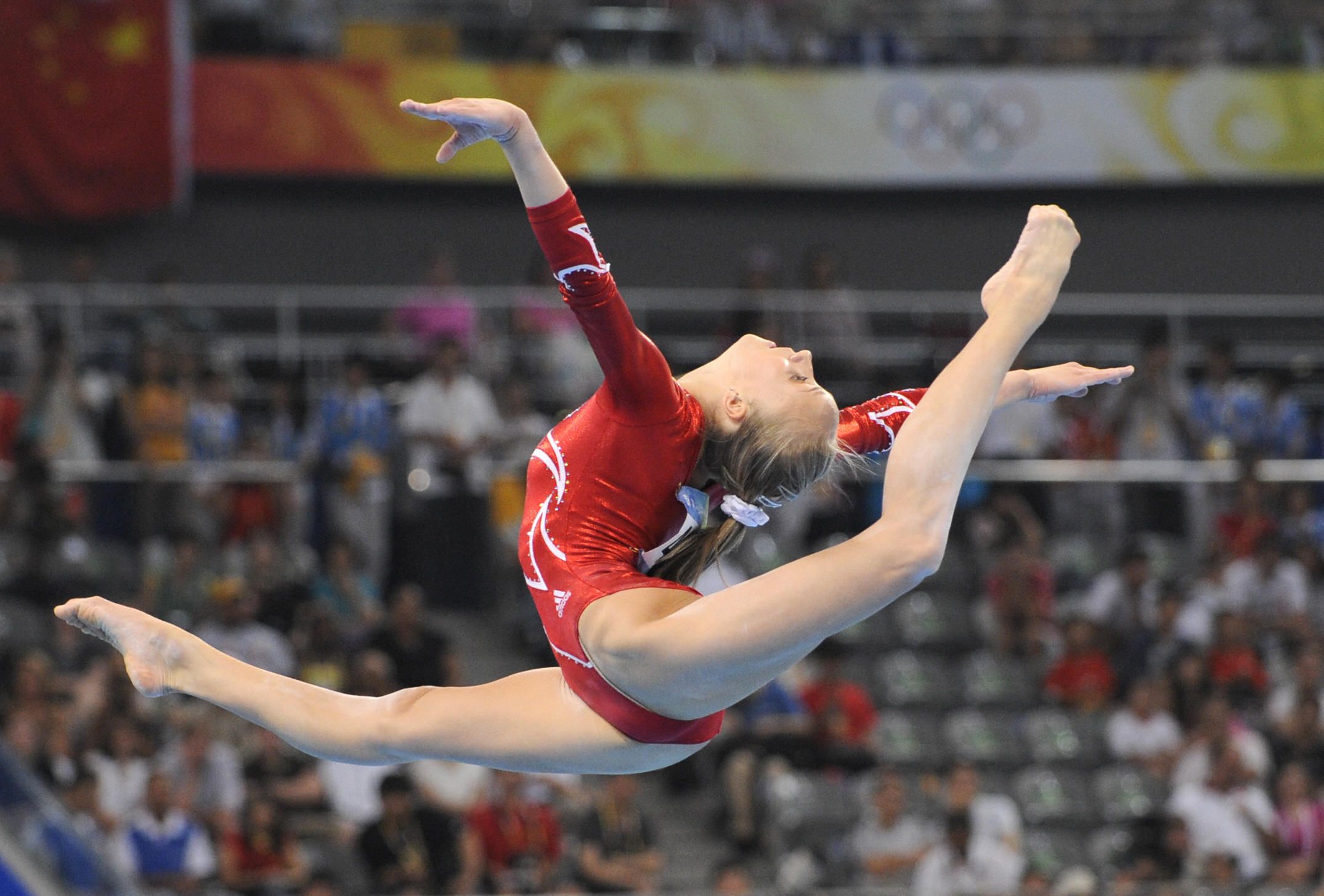 Women’s all-around gold medalist Nastia Liukin showed off some flexibility and strength through her floor exercises. 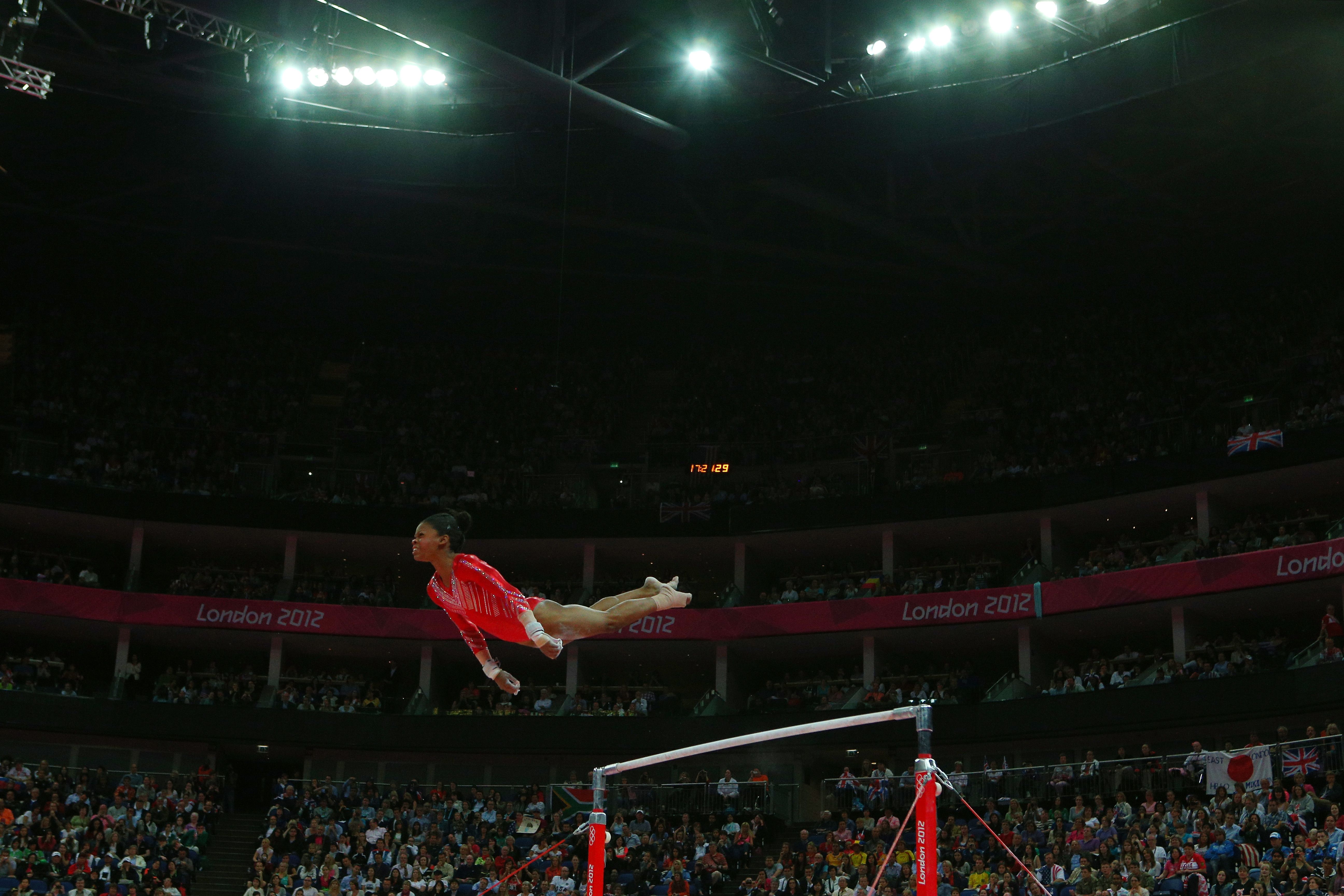 Gabby Douglas earned her all-around title at the London games and soared to new heights, becoming the first woman of color to earn that title. 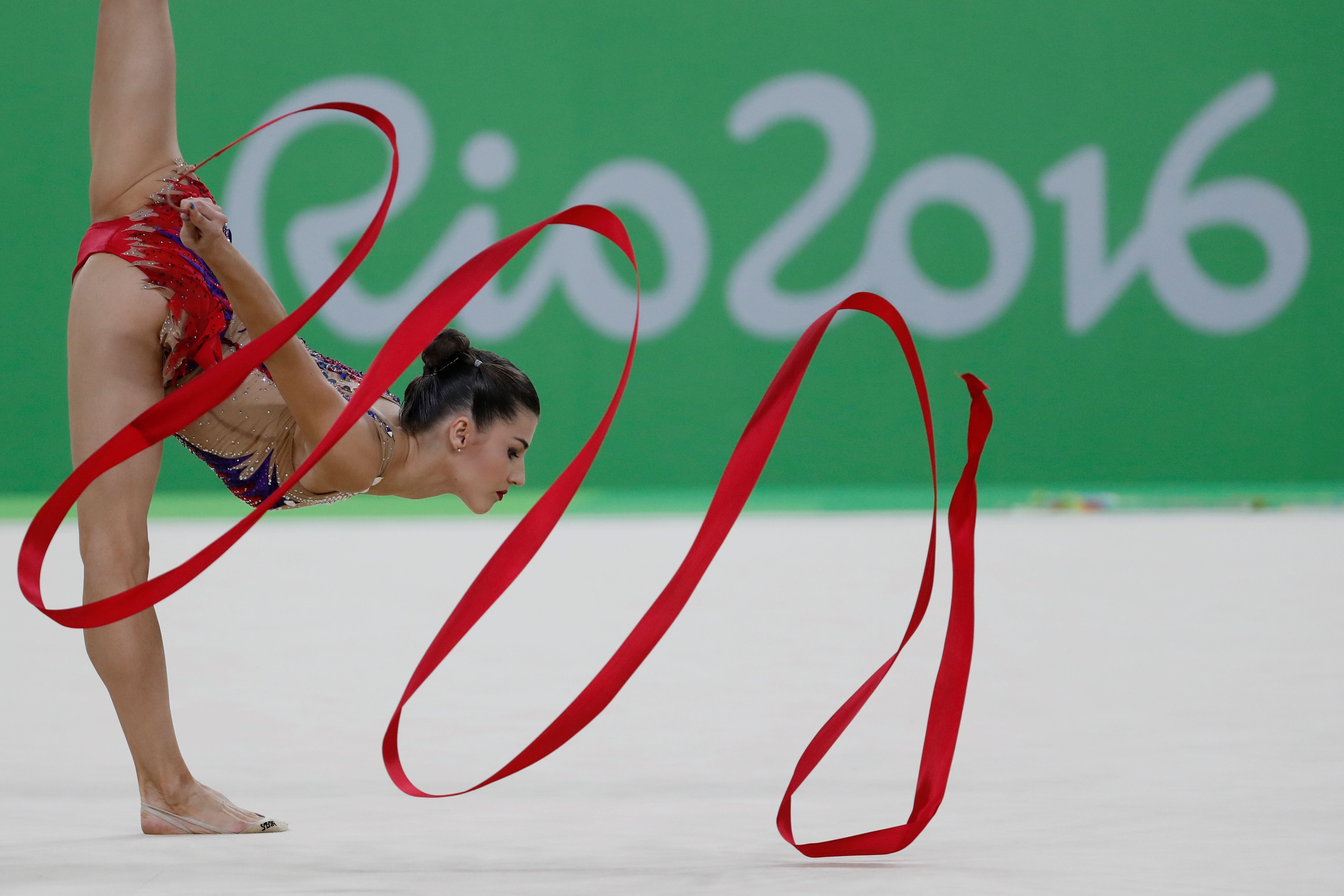 Australian gymnast Danielle Prince showed off just how pretty the ribbons for rhythmic gymnastics can be. 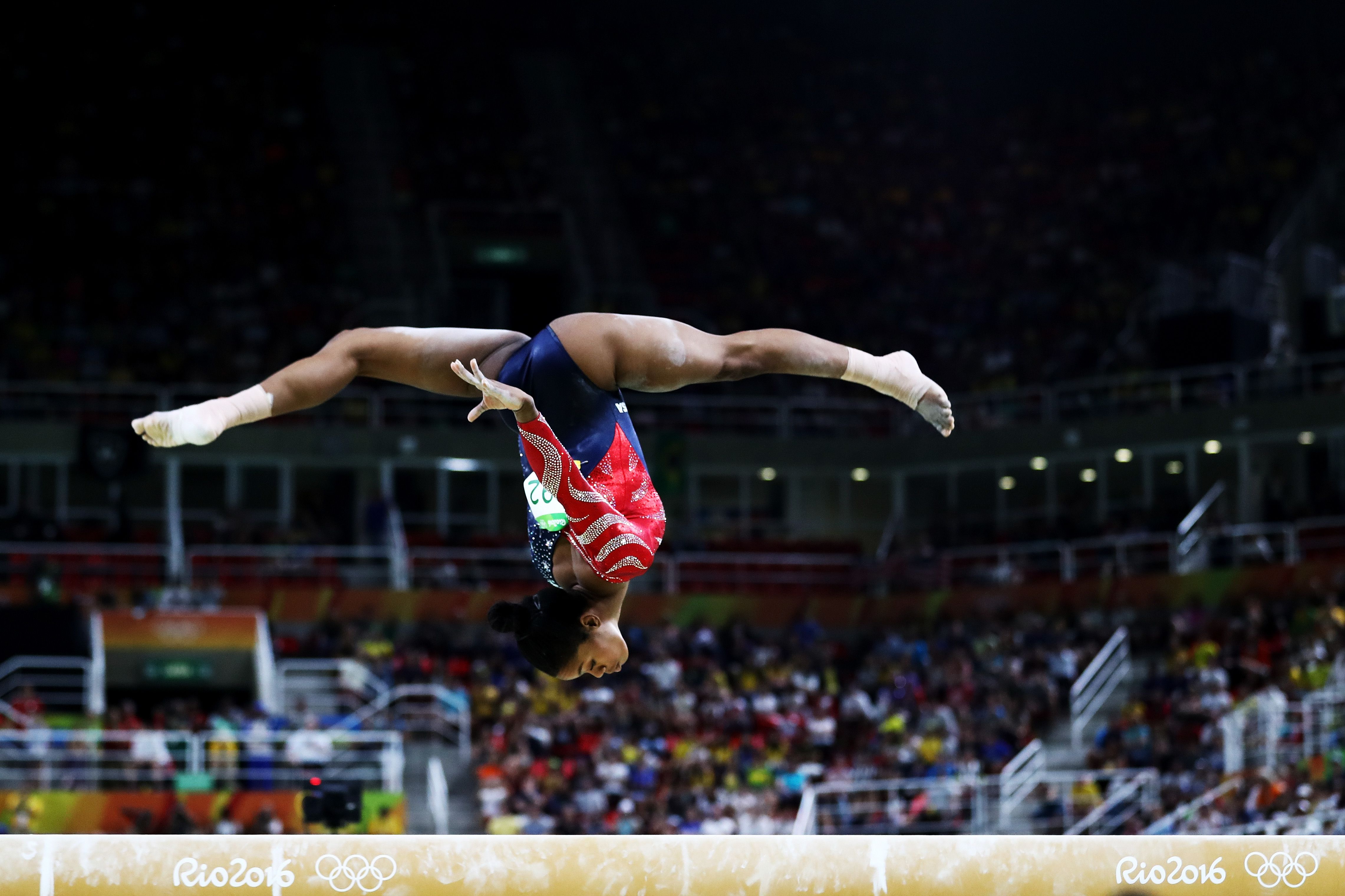 Simone Biles’ inverted moves on the balance beam are just a fraction of her insane skills (several of which have since been named after her).