Broen Holman couldn’t believe the time on the clock when came down the final stretch of the Pacific Grove Lighthouse 5K on November 9. In breaking the 16-minute mark, he had run his fastest time by almost a minute and 24 seconds faster than the road single-age world record for 13-year-olds.

His 15:23 is an insane time for an eighth grader, and to top it off, he won the race outright against older competitors. The California native has been after the record ever since he read about Aidan Puffer of Manchester, Connecticut, breaking the record at the 2018 Boston Athletic Association 5K ahead of that year’s Boston Marathon. Puffer ran a 15:47, beating the previous record of 16:11 by 24 seconds.

“I’ve been running since first grade, when I was 7 or 8,” Holman, of Sonora, California, told Runner’s World. “When I saw this record, I thought I might be able to go after it.”

It was a lofty goal, but with the help of his dad, Darren, a 2000 Olympic Marathon Trials competitor, and his club cross-country team, he went after it. On his way there over the summer, he competed in this year’s USATF Junior Nationals, winning the 1500 meters and 3,000 meters in his age group.

With those wins, and after grabbing a 25:30 personal best at the Kim Duyst Twilight XC Invitational 8K, he decided to go after the 5K road record.

Holman trained four days a week, focusing on the quality of his workouts rather than mileage. His weekly total never exceeded 20 miles between tempo runs, intervals, and easy runs.

“We are careful that we don’t run him much,” Darren Holman told Runner’s World. “When we do workouts, we go for the most bang for our buck. We make sure that we’re not frying him out or wasting any miles we does.” With two pacers from his run group who are in high school, Holman went out fast in this 5K, aiming for around a 5-minute first mile, which he did in a five flat. He covered the second mile in 4:55.

That’s when one of his pacers peeled off. Holman was concerned, but pushed on behind his friend and finished his third mile in 4:57. With only a little bit to go, he saw the clock and was blown away by the time it read: 15:23, a single-age record. 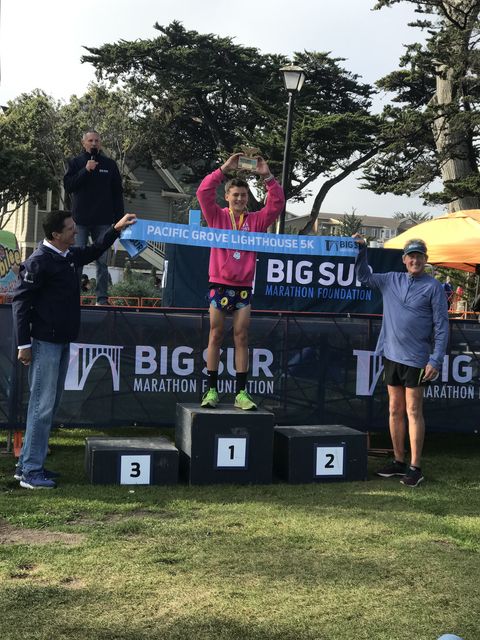 His friends had a similar reaction.

Dad wasn’t able to be there, as he was north in Portland coaching his college team, Stanislaus State, at NCAA Regionals, but he was following as best he could from afar.

“I was watching my men and women compete while having my phone next to me and looking at the live results constantly,” Darren Holman said. “It turned out to be a good day as a coach, as both of my teams did well and my son set the world record.”

Holman turned 14 on November 19 and followed up his 5K record by taking second at the USATF National Championships Cross Country race in Wisconsin for his age group last weekend.

He already has big aspirations for running in high school next year. In addition to improving his times, he wants to continue to set records, starting with being the fastest freshman ever in the country, qualifying for Nike Cross Nationals and Foot Locker Nationals, and setting the mile world record for 14-year-olds.

“He sets a lot of lofty goals for himself,” Darren Holman said. “That’s what inspires him. Any time he asks me if he can do it, I support him and we do what we can do to help him reach these goals. With his times now, and the ability to increase his mileage as he gets older, it lends himself to running pretty fast in high school.”

From: Runner’s World US