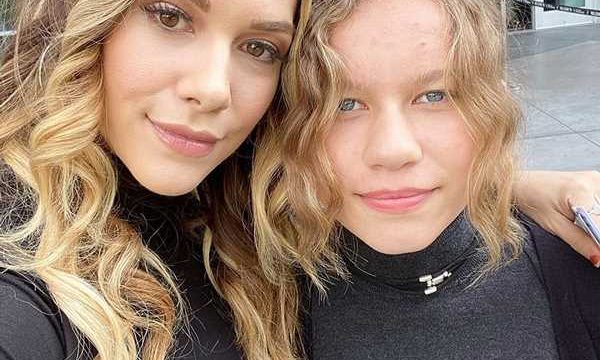 Allison Holker couldn't be prouder of her daughter Weslie Renae for standing up for herself — and educating others on why bullying is wrong.

Last month, Holker's oldest child, 12, responded to a commenter who asked why she "dresses like a boy," sharing a TikTok that said in part, "Just because I don't wear dresses and bright pink doesn't mean I'm dressing like a boy."

In a new interview with PEOPLE, Holker discusses her partnership with Banana Boat sunscreen and their #ProtectTheFun campaign (It "feels like a very natural fit," she says), also revealing that while she and husband Stephen "tWitch" Boss were initially "concerned about" Weslie having social media, they didn't want to be a "blockade" — rather, they wanted to "educate" their daughter about the platform.

"Even before we allowed her to have her own Instagram and TikTok, we sat with her and just laid out the truth that no matter what, unfortunately, we live in a time where people sometimes take their own insecurities out on [other] people," said the pro dancer and Disney's Fairy Tale Weddings host, 32.

"And so what we said to her is, 'We don't want you to have to be fearful of those people.' And we also don't think it's right to say, 'Just ignore them,' " adds Holker. "[Because] what that's also doing is, in some ways, making people want to do it more."

Holker and Boss, 37, went on to tell Weslie, " 'I don't ever want you to ever turn into a troll and become a bully on your side, but instead of ignoring it and just letting it fester inside, let's talk to the people. Let's understand why they're doing it and acknowledge that this is a problem that we shouldn't allow.' "

"What we taught her is by you addressing it, it almost releases it from you. You don't have to hold on to those negative comments," Holker says. "We didn't tell her to make that video, that was of her own accord, but what we have told her is, 'Are you addressing it? You don't have to hold onto that pain anymore.' And hopefully that person sees it and realizes, 'Oh, wow, maybe I should look in on myself.' "

Weslie began her clapback video, which she also shared to Instagram on June 27, by declaring, "Patriarchy is dead" and going on to say, "I wear comfy clothes and darker colors and just because I dress like that doesn't mean I'm dressing like a boy and it doesn't mean that boys or girls are defined by certain things because of their gender."

"It doesn't mean anything and just because you can't open your eyes doesn't mean I'm about to change," the preteen said in epic conclusion.

"Proud of my daughter for standing up for herself and using her voice," Holker wrote in an Instagram caption alongside a repost of the TikTok footage. "We need to stop trying to tear each other down … instead we should stand together understanding our uniqueness is beautiful! Love you @weslierboss."

The So You Think You Can Dance alum — who also shares daughter Zaia, 8 months, and son Maddox Laurel, 4, with Boss — tells PEOPLE that the parents of three "strongly stand behind" Weslie "and her choice to make these videos," because "she's finding her own voice in it and standing really strong."

"She also has so many other kids her age that have been like, 'Wow, thanks for doing this. I want to do that too, I want to stand up for myself.' I think it's really cool that she's only 12 years old [and is] helping other 12-year-olds [be assertive]," Holker says.

"Another point," she adds, is that "a lot of people are like, 'Oh, kids are bullies,' but sometimes my daughter's not just being bullied by 12-year-olds — it's adults. So I think as a whole people we need to really look inside ourselves and remember we should not be allowing this to happen. And we need to stand strong in it."

Allison Holker Says It "Takes a Village" to Raise 3 Kids: "We Have Hands on Deck All the Time"

Partnering with Banana Boat sunscreen on their #ProtectTheFun campaign is something Holker was "excited" to do, because the brand's message is right in line with her family's energetic lifestyle.

"We love staying active — it's such a crucial part of who we are and what we stand behind. So I just love their message of different types of fun, because being in quarantine, you can start to feel a little bit sluggish," she says. "We think it's really important to make sure we're promoting, for our family and others, to really make sure through these times especially that we're staying active, staying outdoors and really soaking up the sun."

Her biggest advice for parents putting sunscreen on their own kids is "to just keep doing it" so it becomes part of a child's routine. "[After] getting past those first couple times using the sunscreen, it's now just like brushing your teeth for us. It's just part of your regular day," the mom of three tells PEOPLE. "So we keep sunscreen everywhere in the bathrooms of our house [because it's] part of what we do before we go outside."

"Because here in California, obviously, it's kind of like summer all year round, let's be real," Holker quips. "So for my kids, it's not a weird activity — it's actually something [where] they're like, 'Oh, that's just what we do.' "