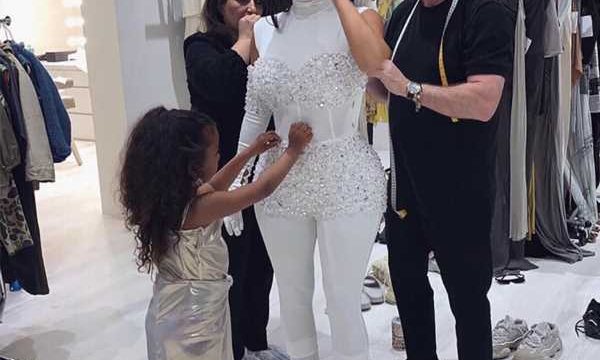 North West already has an eye for fashion!

Kim Kardashian West shared new behind-the-scenes photos from her fitting with one-half of Dolce & Gabbana’s Domenico Dolce on Instagram Saturday, revealing that eldest daughter North had a hand in the process.

“Thank you Domenico! I hope North was a good assistant,” the mother of four, 38, captioned a series of pictures.

In one photo, the little fashion star can be seen putting on her hands on her mom’s corset as the designer puts his finishing touches on the bejeweled turtleneck bodysuit that first premiered during a previous D&G fashion show.

Want all the latest pregnancy and birth announcements, plus celebrity mom blogs? Click here to get those and more in the PEOPLE Babies newsletter.

If Kardashian West’s white ensemble looks familiar, it’s because it’s the same outfit she wore to the Céline Dion concert with husband Kanye West a week ago.

A day after they celebrated their fifth wedding anniversary, the 41-year-old rapper surprised the Keeping Up with the Kardashians star with a very special trip to Las Vegas where Dion performs her residency shows.

Kardashian West previously revealed that her husband had “surprised me with a date in Vegas” shortly after they welcomed their fourth child, son Psalm, via surrogate on May 9.

In honor of their anniversary last month, the KKW Beauty mogul shared a slideshow of behind-the-scenes photos from their beautiful May 24, 2014, wedding, which took place in Florence, Italy.

“Five years ago I married my best friend,” she wrote in another sentimental post.

The couple are also parents to daughters Chicago, 15 months, and 3-year-old son Saint.