A mother who chose to fight her cancer through a vegan diet instead of having chemotherapy has died.

Katie Britton-Jordan, from Derbyshire, was diagnosed with stage 2a triple negative breast cancer in July 2016.

She claimed chemotherapy, proven to save lives, was like ‘poisoning your body’ and opted to take an alternative approach.

Mrs Britton-Jordan, thought to be 40, also refused a mastectomy and radiotherapy. She passed away on Saturday. 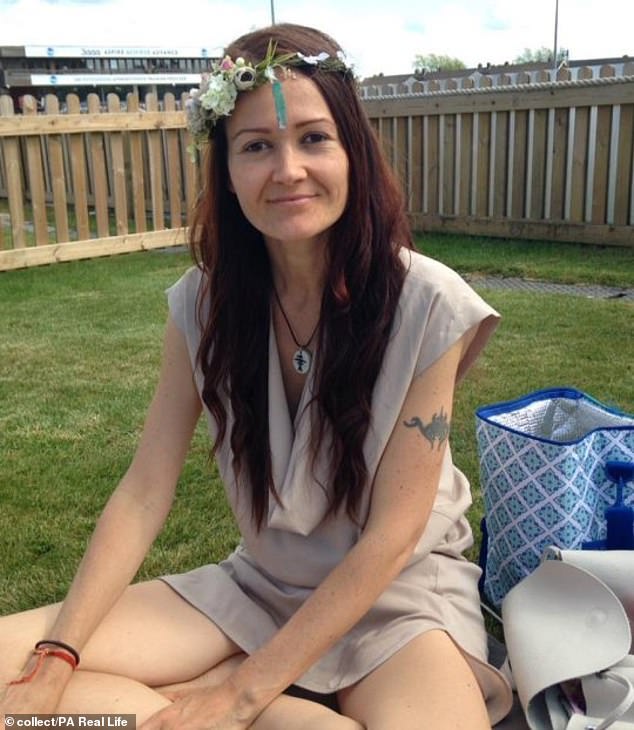 Katie Britton-Jordan, from Derbyshire, was diagnosed with stage 2a triple negative breast cancer in July 2016

Her husband Neil, 58, announced her death on Facebook, saying she was ‘surrounded’ by family and friends and ‘shrouded’ with love.

He said: ‘It breaks my heart to be writing this but on Saturday 25th May, Katie, with the same grace and strength she handled herself through life, peacefully passed to the next.

‘Delilah, her ‘bestie’ Elsa and I went and picked flowers and herbs from the garden and placed them all around Katie, she looked so serenely beautiful.

‘Our little girl has learnt the hardest lesson at such a young age and I simply run out of answers when sobbing she asks ‘why we have to say bye bye?’

‘I know some people may have their own opinions on what Katie should or should not have done but whatever that is, it does not alter her bravery and dignity over the last three years.’ 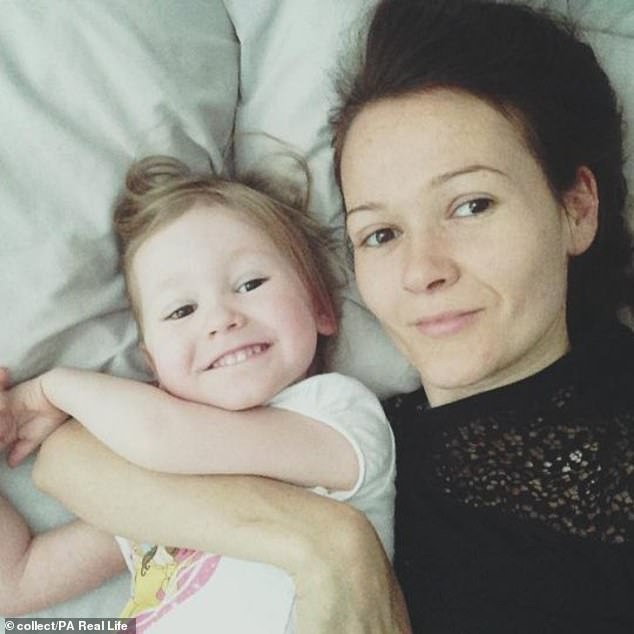 She claimed chemotherapy, proven to save lives, was like ‘poisoning your body’ and opted to take an alternative approach (pictured with daughter Delilah) 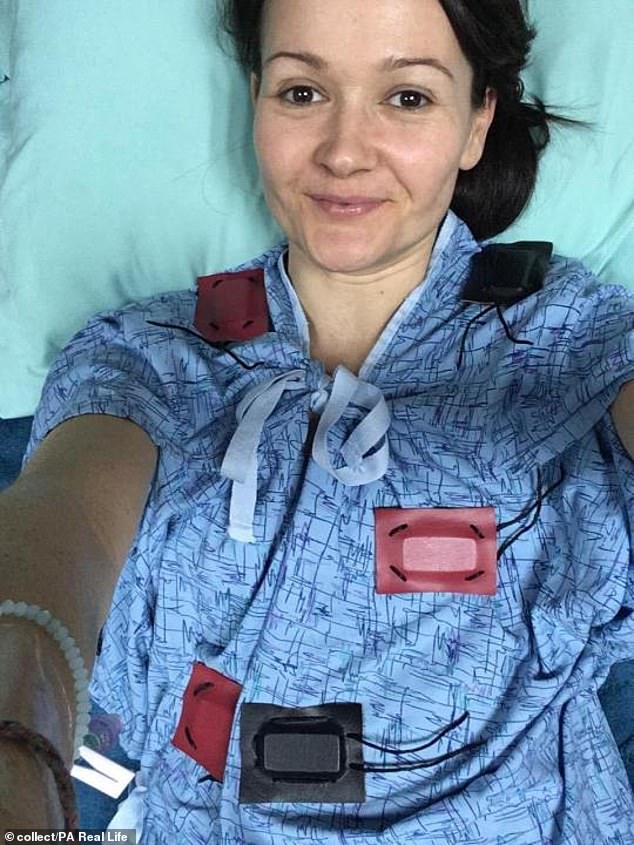 Mrs Britton-Jordan, thought to be 40, also refused a mastectomy and radiotherapy. She passed away on Saturday 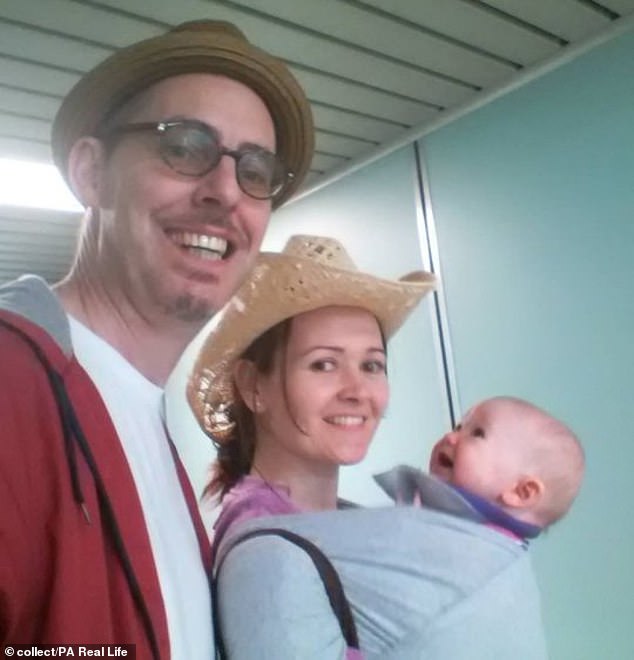 Her husband Neil announced her death on Facebook, saying she was ‘surrounded’ by family and friends and ‘shrouded’ with love (pictured together with Delilah)

WHAT DO EXPERTS THINK TO HER DECISION TO REFUSE NHS TREATMENT AND GO VEGAN INSTEAD?

Dr Clare Morrison of MedExpress, a GP specialising in nutrition told Femail in 2017: ‘Overall, I believe that treating terminal cancer with a vegan diet is dangerous and unwise.

‘However, I do understand that patients gain some encouragement from feeling that they are taking control of their health, and if the situation is dire, then the patient’s mental wellbeing may take priority over their remaining lifespan, which is likely to be very compromised anyway.’

Dr Catherine Zollman, a GP for more than 20 years and medical director of Penny Brohn UK, said: ‘In the case where the treatment offered on the NHS is potentially curative, treatment and monitoring are really important.

‘If you miss that window, the potential for cure may no longer be there.’

Most cancer patients are offered chemotherapy, treatment that stops cancer cells reproducing, which prevents them from growing and spreading in the body.

But it comes with a host of unpleasant side effects, including fatigue, nausea, hair loss, an increased risk of infections, a sore mouth, itchy skin and diarrhoea.

Many of these side effects can be treated or prevented and most, if not all, will pass after treatment stops, the NHS states.

Other treatments include surgery and radiotherapy.

Mrs Britton-Jordan, a jewelry maker, started to feel pain in her left breast after knocking it while playing with Delilah.

She had a feel and spotted a small lump, prompting her to visit her GP who didn’t expect it to be anything sinister.

Mrs Britton-Jordan was referred to the Royal Derby Hospital, Derbyshire, for a scan a few weeks later.

An ultrasound showed a couple of solid masses in her breast, with medics deciding to give her a mammogram to examine them closer.

She was called in to discuss her biopsy results a couple of weeks later, which confirmed three cancerous tumours in her left breast.

Stage 2a triple negative breast cancer is an early form of the killer disease, which experts define as still growing but contained.

Stage 2 breast cancer responds well to treatment usually, according to the US National Breast Cancer Foundation.

Doctors said the best course of action would be to remove the breast, followed by a course of chemotherapy and radiotherapy.

They told her that although her cancer was treatable, without treatment, she would die, it was reported at the time.

Speaking in 2017 about shunning NHS treatment, she said: ‘I have always been into alternative health.

‘I started researching and decided there was no way I was having chemotherapy and radiotherapy.

‘Initially I wasn’t sure about the surgery. I didn’t know if it was a good thing or a bad thing but the more I read into it, the more I decided I didn’t want to do it either.’

She added: ‘I had always had a healthy diet and I didn’t eat red meat but I decided that I would go completely vegan and cut out sugar and gluten. I eat mostly raw food.’

She decided she no longer wanted to have CT scans on the NHS because of the amount of radiation involved.

Instead, she had private thermographic imaging scans, which use a heat camera to show if new blood supplies are being formed, 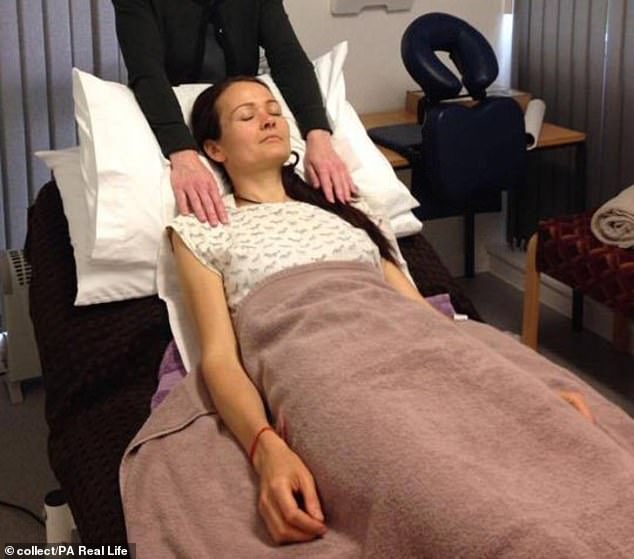 Mrs Britton-Jordan, a jewelry maker, started to feel pain in her left breast after knocking it while playing with Delilah. She had a feel and spotted a small lump, prompting her to visit her GP who didn’t expect it to be anything sinister 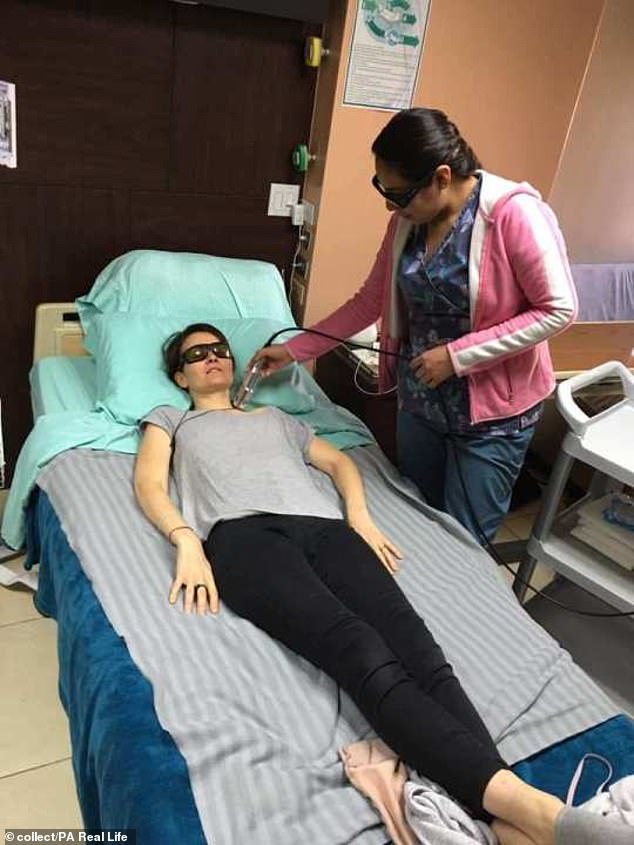 She was diagnosed with cancer and doctors said the best course of action would be to remove the breast, followed by a course of chemotherapy and radiotherapy 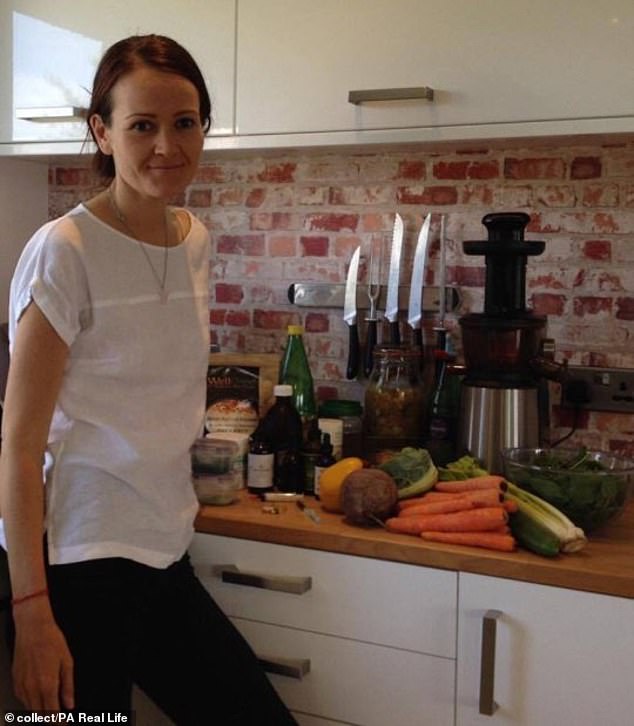 They told her that although her cancer was treatable, without treatment, she would die, it was reported at the time

Katie said: ‘I feel really fit and well and I’m still able to work and look after my daughter. My diet, which involves mainly raw fruit and vegetables, has really helped.

‘If I had chemo, I think I would be almost bed-ridden. I have seen friends have chemotherapy and they are affected for life by it. It’s horrible. You are poisoning your body.

‘In my opinion, there are lots of options out there that I think are much more valuable than poisoning yourself. I believe what I am doing is the best option for me.’

Mrs Britton-Jordan was also fundraising for other alternative treatments, including immunotherapy and mistletoe therapy.

The latter she described as extracts of the plant being injected into the body, and claimed it was supposed to boost the immune system.

Mrs Britton-Jordan claimed her mother Carole and father Ron were behind her decision to refuse NHS treatment.

Speaking about her decision to not have conventional treatment two years ago, she admitted she received regular messages from worried friends.

WHAT IS BREAST CANCER, HOW MANY PEOPLE DOES IT STRIKE AND WHAT ARE THE SYMPTOMS?

What is breast cancer?

Breast cancer develops from a cancerous cell which develops in the lining of a duct or lobule in one of the breasts.

When the breast cancer has spread into surrounding breast tissue it is called an ‘invasive’ breast cancer. Some people are diagnosed with ‘carcinoma in situ’, where no cancer cells have grown beyond the duct or lobule.

Most cases develop in women over the age of 50 but younger women are sometimes affected. Breast cancer can develop in men though this is rare.

The cancerous cells are graded from stage one, which means a slow growth, up to stage four, which is the most aggressive.

A cancerous tumour starts from one abnormal cell. The exact reason why a cell becomes cancerous is unclear. It is thought that something damages or alters certain genes in the cell. This makes the cell abnormal and multiply ‘out of control’.

Although breast cancer can develop for no apparent reason, there are some risk factors that can increase the chance of developing breast cancer, such as genetics.

What are the symptoms of breast cancer?

The usual first symptom is a painless lump in the breast, although most breast lumps are not cancerous and are fluid filled cysts, which are benign.

The first place that breast cancer usually spreads to is the lymph nodes in the armpit. If this occurs you will develop a swelling or lump in an armpit.

How is breast cancer diagnosed?

If you are confirmed to have breast cancer, further tests may be needed to assess if it has spread. For example, blood tests, an ultrasound scan of the liver or a chest x-ray.

How is breast cancer treated?

Treatment options which may be considered include surgery, chemotherapy, radiotherapy and hormone treatment. Often a combination of two or more of these treatments are used.

How successful is treatment?

The outlook is best in those who are diagnosed when the cancer is still small, and has not spread. Surgical removal of a tumour in an early stage may then give a good chance of cure.

The routine mammography offered to women between the ages of 50 and 70 mean more breast cancers are being diagnosed and treated at an early stage.