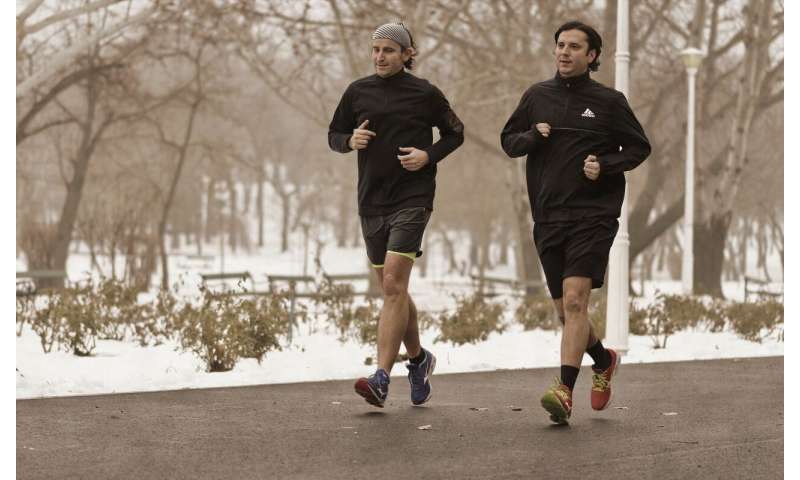 People who enjoy exercising outside during winter need to be wary of the effects plunging temperatures can have on their lungs, according to a University of Alberta cold-weather exercise physiologist.

“If it’s a really cold day in February, a high-intensity run or ski race could change your life,” said Michael Kennedy.

He explained the problem with intense cold-weather exercise is that increasingly cold temperatures make it harder for the lungs to warm and humidify the air, which causes the lining of the airway to dry and, in some cases, become irreparably damaged.

“The inflammatory response is so large that the lungs never recover back to a healthy baseline,” he said. “They basically remodel.”

Kennedy said ski culture and Nordic culture are slowly changing, but for the most part there is still general acceptance that it’s OK to race in -15 C or -20 C.

“It’s not OK,” he said. “We have a qualitative study planned on high-level cross-country skiers who have chronic cough and severe reduced lung function post-retirement.”

The idea for the study came from research done in advance of the 2002 Salt Lake City Olympics, in which researchers screened nearly 40 U.S. winter sport Olympians doing exercise time trials compared with the standard lab test and found that many of the athletes were positive for exercise-induced asthma after their exercise time trial but not the lab test.

Kennedy noted a limitation of the study was that each athlete was tested at a different temperature and different mode of exercise.

“The speed skaters might have skated at -5 C, the cross country skiers might have skied at -15 C,” said Kennedy. “Thus, we wanted to reproduce that study but in a more standardized manner.”

Building on his lab’s previous research showing that athletes who exercised in temperatures below -15 C put their lungs at risk of severe lung constriction and possible damage, Kennedy recruited an array of cold-weather sport athletes to complete the standard lab test (breathing dry air from a gas tank to provoke constriction) compared with a five-kilometer outdoor run when the thermometer hit -15 C.

He found that five out of the 16 participants were positive for exercise induced bronchoconstriction on the lab test, while seven tested positive on the cold air test.

Kennedy said that number lines up with previous studies showing that between 40 and 50 percent of all Nordic or winter sport athletes reported some sort of exercise-induced asthma (bronchoconstriction) due to cold-weather exercise.

Lungs also run counter to other parts of the body, like the heart, which Kennedy explained responds to stressful situations by getting bigger, stronger and more efficient.

“When the lungs are exposed to stressful environments, like the cold, they don’t remodel positively, and lung function gets worse over time—especially during exercise,” he said.

And not all lungs are created equal. Kennedy said another curious finding from previous research was that people with a smaller stature are most vulnerable to cold-weather lung constriction.

Kennedy said for those who are determined to exercise in the cold, it’s a good idea to do an indoor warm-up to help dilate the lungs, which will reduce the effects of cold air.

He added that research has shown covering your mouth a little bit also has a significant effect on reducing the constriction effect due to cold air.