Children of strict, perfectionist mothers may grow up to have alcohol problems in later life, a study suggests.

Researchers found students who were brought up with authoritarian mothers – but not fathers – were more likely to be a perfectionist.

This contributed to higher levels of depression, and in turn, stronger self-medication motives, as well as drinking problems.

Authoritarian parenting is described as enforcing strict rules driven by shaming and punishment and a lack of warmth. 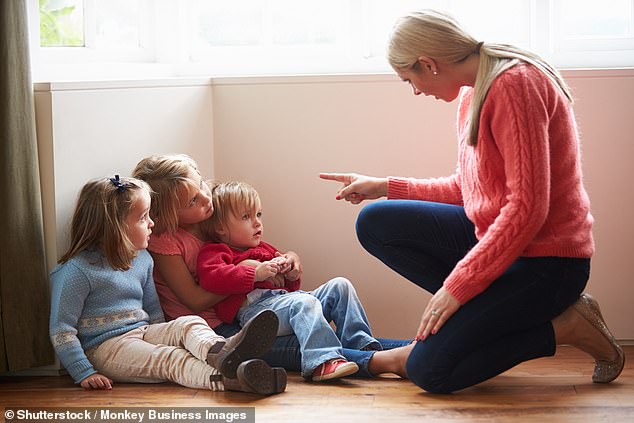 Children of strict mothers may ‘grow up to have alcohol problems in later life to cope with depression of not being perfect’, a study suggests

The study was undertaken by Arizona State University on 419 students who were 20 years old, on average.

It was triggered by the researchers interest in the way their own students behave.

Dr Julie Patock-Peckham, an assistant research professor and corresponding author of the study, told PsyPost: ‘I became interested in this topic after observing some of my more technically talented students develop alcohol use disorders or relapse from alcohol addiction.’

‘These students were obsessed with how others viewed them to the point of fearing any feedback regarding their writing.

‘These students seemed to be using alcohol to cope with their life issues at a greater rate than students who were more comfortable not being perfect all the time.’

The students were surveyed on how they were raised by their parents with 60 questions – 30 per parent.

They were asked how strongly they agreed with statements such as, ‘My (mother/father) felt that wise parents should teach their children early just who is boss in the family’.

The students rated various measures of their own perfectionism on a 23-item scale, such as how ordered things need to be in their life and how high standards were for themselves.

In a series of questionnaires, students were asked about the reasons for drinking alcohol, their attitudes towards alcohol and how much they drank on any given occasion.

Lastly, they were quizzed on how often they felt a set of 20 depressive symptoms – such as loneliness or crying – within the past week.

WHAT IS AUTHORITARIAN PARENTING?

Authoritarian parenting styles are characterized as having unyielding rules without warmth.

A parent may use unquestioning obedience, and enforces good behavior through threats, shaming, and other punishments.

Parents with an authoritarian style have very high expectations of their children, yet provide very little in the way of responsive feedback and caring.

Mistakes are punished harshly, but are unlikely to give praise or encouragement even if the child is doing well.

Parenting styles have been associated with a variety of outcomes.

Authoritative parenting, on the other hand, is characterized by warmth with clear guidelines for children.

The researchers found that participants with a more authoritarian mother were more likely to have alcohol problems.

An indirect link between was identified – a negative type of perfectionism known as discrepancy.

Perfectionism discrepancy is the belief that personal high standards are not being met by their performance.

Maternal authoritarianism was linked to exacerbated perfectionism discrepancy, which contributed to depression and drinking.

However, an authoritarian father didn’t have an effect on the students’ depressive symptoms or alcohol use, the findings show.

The authors wrote: ‘It may be perceived as a form of caring by fathers to have rules for offspring even when those rules are unyielding.’

Authoritative parenting in mothers, as opposed to authoritarian, was indirectly linked to less alcohol use.

An authoritative parent by definition would still heave clear guidelines, but is still responsive and warm towards their child.

Dr Patock-Peckham said perfectionism was a ‘grossly understudied’ construct when it comes to how it effects health.

She said: ‘Needing to be perfect in the eyes of others literally can be harmful to your health.

‘We need to stop taking pride in glorifying perfectionism discrepancy. No one ever did anything truly novel, innovative, or exciting in science if they were too afraid to look foolish on occasion.’

Perfectionism has been shown to cause social disconnection, OCD, eating disorders, suicide and stress, the researchers note.

The findings were published in the journal Addictive Behavior Reports.